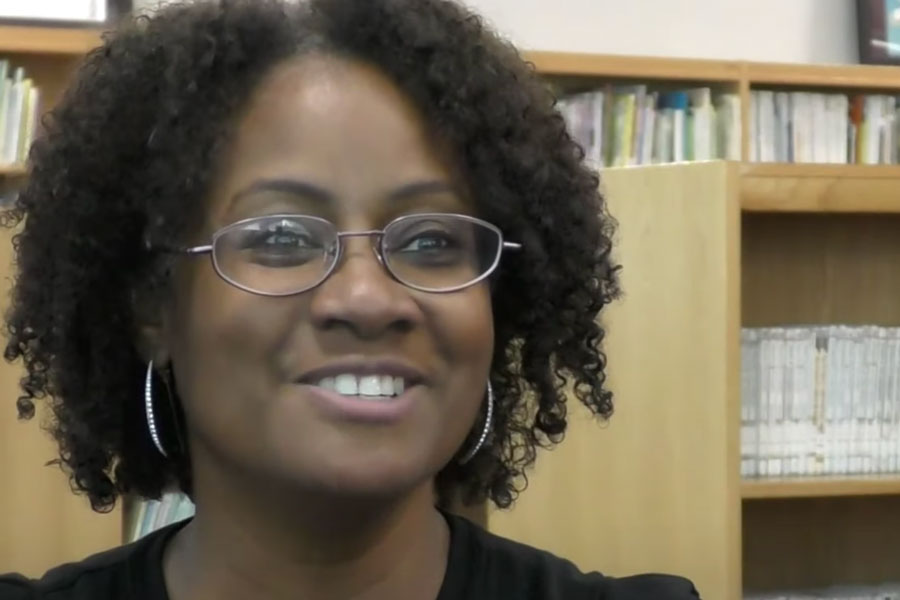 The Crestview Elementary community is mourning the loss of social worker Ada Wallace, who staff, parents and colleagues say left a lasting impact on the community. Image courtesy city of Merriam.

Students, families and staff at Crestview Elementary in Merriam continue to grapple with the loss of the school’s beloved social worker Ada Wallace.

Ada Wallace died unexpectedly on Jan. 31 from a large blood clot in her brain.

Wallace was known to go above and beyond not only for students but for families and fellow colleagues.

Dee Pritchett, a Crestview volunteer who worked closely with Wallace, said she thinks Wallace saw serving the school and its larger community as her life’s mission.

“Ada never had a bad day,” Pritchett said. “Ada always had a smile. She knew every student, she knew everyone’s needs and she had the resources to fill those needs — I mean, there just isn’t anybody like Ada.”

Wallace stood out for her compassion, heart and empathy at Crestview, says David Aramovich, who worked closely with Wallace as the Shawnee Mission School District’s liaison for homeless student services.

They worked together for 14 years, and Aramovich says he watched Wallace build deep connections with students and their families.

“I think that was certainly one of the most beautiful things about her, is that there was an artfulness to how she could connect with a family or students,” Aramovich said.

Michelle Alvarado and her son Anthony Boykin are just one example of Wallace’s ability to create long-lasting bonds.

Alvarado’s mother had cancer three times, and she says Wallace was instrumental in helping Boykin cope with his grandmother’s health struggles by meeting with the boy weekly to talk about his feelings.

When Boykin’s grandmother’s illness worsened, Wallace suggested making a scrapbook of his favorite pictures with her — which he was able to give to his grandmother before she died in August 2020.

Now, Alvarado says the scrapbook is one of his most treasured belongings.

Not only did Wallace help Boykin cope with his grandmother’s illness and death, she created a safe space for her son to open up. Alvarado says Wallace was able to break through Boykin’s reserved personality — even about things he wasn’t comfortable speaking to his family about.

“She was one of the only people he felt comfortable enough to speak about whatever was bothering him,” Alvarado said.

Stories about Wallace like Alvardo’s are common around Crestview.

Mahkala Lackey, a fifth-grade teacher at the school, says she will remember Wallace’s desire to help people more than anything.

Wallace took Lackey under her wing when Lackey was a first-year teacher in 2019. That mentorship, Lackey says, quickly turned into a friendship.

Wallace became Lackey’s go-to person at school, someone she could talk to as a voice of wisdom and reason no matter what the day looked like, she says.

Whether it was a teacher needing a break or a student struggling, Lackey says Wallace didn’t hesitate to step in and help. To Lackey, that willingness to help others is the first thing that comes to mind when thinking about Wallace.

That echoes what Aramovich and Pritchett both said they’ll remember Wallace for her caring and compassionate ways.

“She’ll be remembered for a beautiful heart, a compassionate heart and for an enormous amount of empathy for folks that had been challenged in life, whether it be by way of mental illness, economic challenges or racial inequity,” Aramovich said.

Shortly after Wallace’s death in January, the city of Merriam hosted a warm clothing drive to collect items like gloves for Crestview students. A fitting tribute, the city thought, to a woman who had dedicated her life to helping others.

Additionally, Pritchett, the Crestview volunteer, is working with the school to turn what was once the “Comfort Closet,” where kids could go if they needed clothing or toiletry items, into “Ada’s Closet.”

Pritchett had worked with Wallace to create the space and wants its purpose as a place of help and comfort for kids to carry on.

A commemorative plaque will be purchased and the closet will be renamed as yet another way to keep Wallace’s name and memory alive, Pritchett said.

Lackey says students, staff and family can also continue to honor Wallace in the way they choose to speak to one another and lift each other up on a daily basis — by putting others first, just like Wallace did.

“She was kind of the last person on her list, if you will, she just always put others first,” Lackey said. “I think our community and our students and our staff can continue that by just choosing kindness each day, the way she would.”