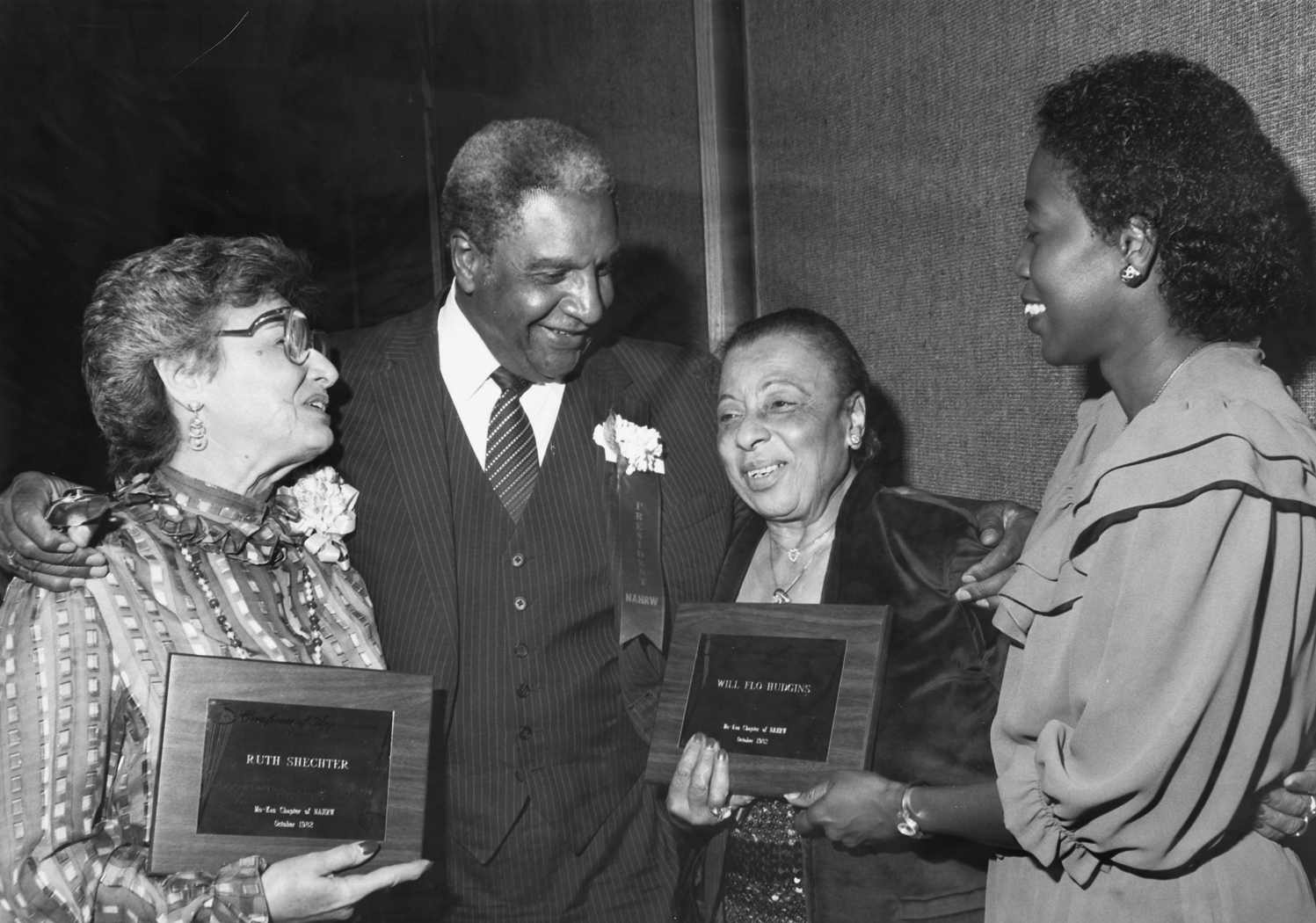 In 1982, the National Association of Human Rights Workers honored Ruth Shechter for her lifetime of work. She is shown here with other honorees.

March is Women’s History Month, and at the end of the month is the Jewish Passover celebration. Both intersect in the life of a Johnson County history maker named Ruth Shechter, a Jewish woman who tirelessly worked to make the county more just and equitable. Shechter and her husband, Nathan, moved to Fairway from Chicago in 1958. Over the course of 60 years living in Johnson County, Mrs. Shechter galvanized her community in support of civil rights, equal and affordable housing, women’s rights, and more.

Within a few short years of moving to Johnson County, Shechter had become a powerful advocate for civil and human rights both locally and nationally. She was involved in the Greater Kansas City Council on Race and Religion, was a frequent speaker and advisor for the Johnson County Human Relations Commission (HMRC), served as the president of the National Association of Human Rights, a Commissioner on the Kansas Commission on Civil Rights, and was the first woman to serve as chair of the Plains State Region of the Anti-Defamation League (covering Nebraska, Iowa, Kansas, and Missouri).

Shechter focused much of her time and energy on fair housing. She served as the president of the Shawnee Mission Housing Council, an organization that worked to discourage discrimination and create affordable housing for low-income residents of Johnson County. Part of her work with the council involved calling home sellers and asking them to pledge to sell to any interested party, regardless of race, ethnicity, or religion. From 1960 to 1972, Shechter also served on the Kansas Advocacy Council on Civil Rights, an organization that was instrumental in passing the 1970 Kansas Fair Housing Act.

In 1967, Olathe began an Urban Renewal Project. The city demolished much of the historic downtown in order to pave the way for more modern buildings. Fairview, the historic Black community near Olathe’s downtown, was also targeted for modernization. The Urban Renewal plan called for homes that did not meet code to be demolished, rebuilt, and sold to the original owners with new mortgages. This plan, created without input or support from the Fairview community, would render many homes too expensive for residents to afford after modernization efforts were complete.

The home of Fairview residents Joseph and Mary Person, for example, was valued at $8,000. The new, modern house proposed to be put in its place would have cost $70,000. Although the planners intended for Fairview residents like the Persons to be able to purchase the new, more modern home, residents’ income had not changed. The Persons simply would not be able to afford a house that was nearly ten times more expensive than their original home.

When she learned this, Ruth Shechter became an ally to those living in Fairview. She began by listening. Joe Person, who was serving on the Fairview Neighborhood Council, shared his story, as well as those of other Fairview residents. Shechter empathized with the Fairview residents and began advocating for those who were being priced out of their neighborhood.

Shechter and others began Homes Evaluation & Rehabilitation (H.E.R.E.). This organization bought Fairview homes deemed “sub-standard” by the Olathe Urban Renewal Project and made repairs to the structures rather than demolishing and rebuilding them. H.E.R.E. then sold the repaired homes back to the original owners with low-interest, long-term FHA loans. Shechter’s program helped many Fairview residents continue to live in their homes in the historically Black neighborhood.

Despite Shechter’s efforts, the Olathe Urban Renewal Project displaced 33 Black families from the Fairview neighborhood. They were pushed out by homes they could not afford, built by an urban renewal project that they did not originally agree to. One of those 33 families were the Joe and Mary Person’s family. The Persons were not eligible for the H.E.R.E. program because of Mr. Person’s role on the neighborhood council.

Shechter was not deterred, however. In 1969, she joined the Shawnee Mission Fair Housing Council and began working on behalf of the entire community. “There is a great deal of work to be accomplished to promote equal opportunities for everyone in Johnson County,” she said, “and we believe that as an incorporated body we’ll have a little more weight to help.”

Shechter worked on behalf of civil and human rights all of her life, leading many efforts, and being active in Beth Shalom synagogue. Despite the losses experienced by those in Fairview, Shechter’s career as a community advocate had a positive impact not just on Johnson Countians, but the KC Metro and the state of Kansas. “I’ve been involved in civil rights-that’s been my life,” she said.

Shechter died in 2018 at the age of 96. She is remembered as a compassionate, optimistic, and dynamic trailblazer who spent her life working to provide equal opportunities, support fair housing, and advocate on behalf of all Johnson Countians.

Johnson County Museum will host a special exhibition inside and outside of the 1950s All-Electric House for the Passover season. Starting on March 26, objects from the Congregation B’nai Jehudah’s Klein Collection will be on display at the Johnson County Museum. The table inside the All-Electric House will be set for Seder. Both will be on exhibit through May 1. On March 31, the museum will offer a free virtual program in collaboration with the Klein Collection CuratorAbby Magariel, and the congregation’s Rabbi. Register here: https://anc.apm.activecommunities.com/jcprd/activity/search/detail/4088?onlineSiteId=0&from_original_cui=true&locale=en-US.

To learn more about Urban Renewal in Olathe: https://jocohistory.org/digital/collection/alb/id/406/rec/1 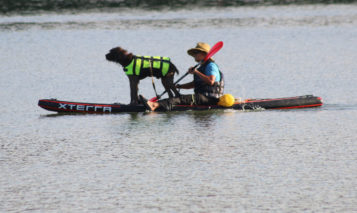 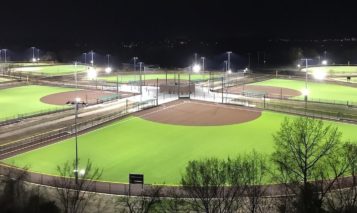 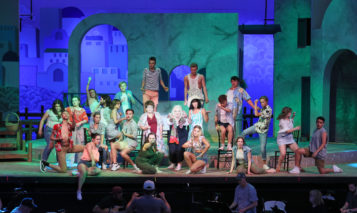 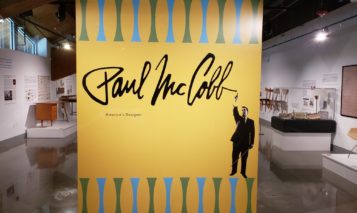 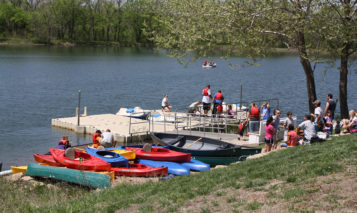