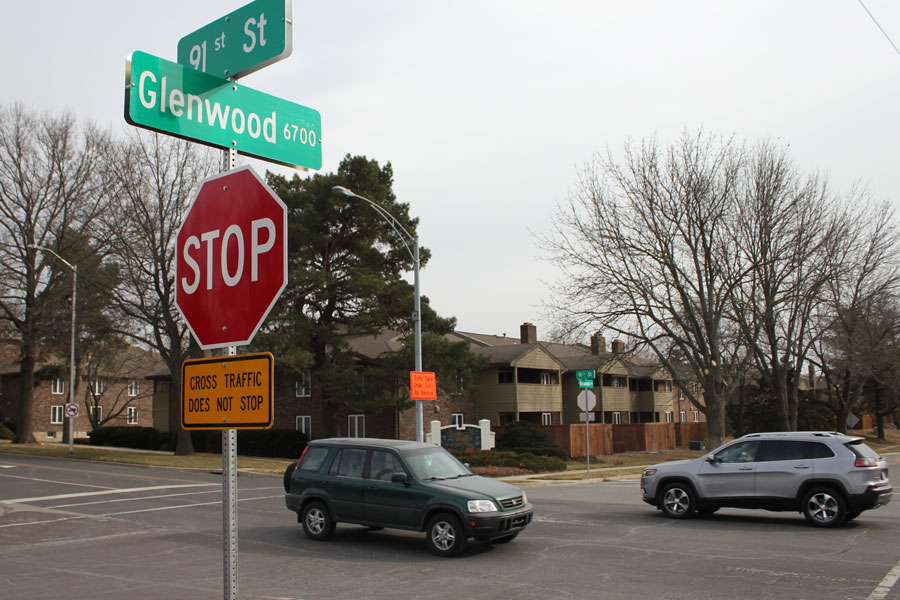 Overland Park will permanently remove traffic lights at Glenwood Street and Lamar Avenue. The city began testing the removal in October 2020 and traffic engineers have since signed off on the change. Photo credit Kyle Palmer.

The Overland Park City Council has decided that the two traffic signals with low volume along 91st Street will be removed, despite objections from some in the neighborhood concerned about pedestrian safety.

Councilmembers voted 10-2 to remove the traffic lights that have been contested by nearby residents for four months after being assured that the intersections at Glenwood Street and Lamar Avenue would be safe. Residents had been concerned about crashes that occurred while the lights were in a flashing transition mode prior to removal.

Traffic engineers recommended removing the lights because the volume of traffic does not warrant them. The signals are near the end of their lives at 30 and 40 years old, and would have to be moved to accommodate a new bike-pedestrian trail that will be built on that street. Moving them would likely damage them, engineers said.

But neighbors have not been on board. They organized a petition drive on Change.org that had over 290 signers by Monday. Organizer Donna Palatas said during public comment time that neighbors are concerned about children crossing to schools in the area, and about fast-flowing traffic with no breaks for pedestrians. In the past, she and other neighbors have also questioned the wisdom of removing the signals when there were five non-weather-related crashes at the Glenwood intersection recently while the lights went into flashing mode.

But the prevailing view on the council was to agree with the engineers’ recommendation that the intersections don’t meet standards to have stoplights. Councilmember Jim Kite said the city needs to stick to its own rules on when they’re allowed.

“We can’t make laws about traffic based on mob rule. We can’t have a city of fiefdoms where one neighborhood prefers four-way stops and another prefers stoplights – we have one set of rules,” Kite said.

During the discussion, councilmembers received reassurance from engineering staff that the crashes were anomalies likely caused by the change to flashing and confusion about what a flashing yellow means.

Neighbors have also been concerned because of development in the area, including the Promontory apartment complex nearby. But traffic engineer Bruce Wacker said even at that, there would still need to be significantly more growth of traffic on Glenwood to justify the signals. Signals were installed when a Hy-Vee grocery store was in the neighborhood years ago, but it has since moved out and the neighborhood has aged and now has fewer children and teenage drivers, he said.

Wacker also said there are other sign options to protect pedestrians and that the city would continue to monitor activity at the intersections.

Councilmembers Faris Farassati and Scott Hamblin, who voted against the idea, held a virtual meeting with neighbors opposed to the idea on Saturday.

As the discussion entered its second hour, some civility began to evaporate. Kite said some people were trying to create division on the issue. Spears openly criticized Farassati, saying he was dismissive of the engineer’s scientific data while “he constantly reminds us he bases his opinions on facts and science.”

Mayor Carl Gerlach warned that he would begin enforcing the council’s rules on speaking limits, an apparent reference to Farassati’s sometimes lengthy questions of staff.

Farassati said other councilmembers were trying to “suffocate the conversation.” From there, a debate ensued on parliamentary procedures for calling the question, which if approved cuts off discussion and ends in a vote. 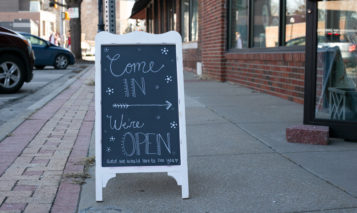