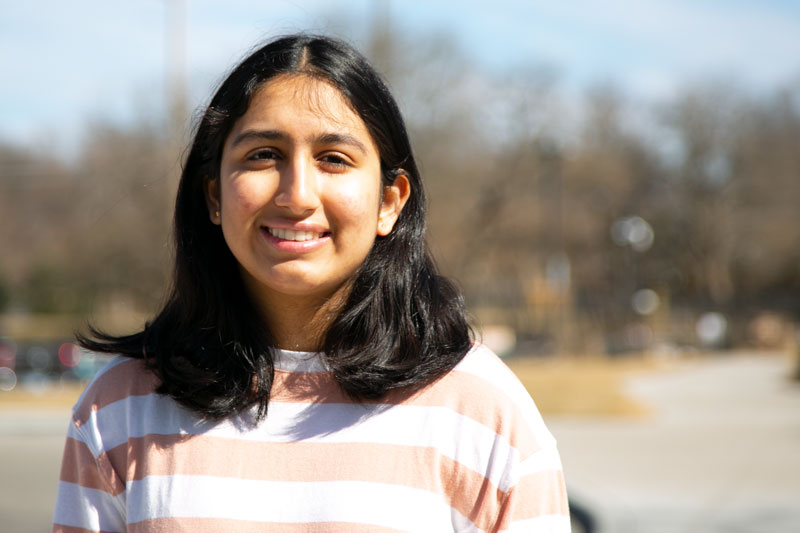 Ishya Bhavsar, an eighth grader at Indian Hills Middle School, won the Johnson County Spelling Bee in late January — for the second year in a row.

Bhavsar won the 2021 spelling bee with the word “onomatopoeia,” which can be defined as the creation of a word from a sound associated with its name such as tick tock or sizzle. Last year, Bhavsar’s winning word was “legerdemain,” or “sleight of hand” according to the Merriam-Webster Dictionary.

The county’s spelling bee looked slightly different this year due to COVID-19, Bhavsar said, and the process included a virtual spelling test, nine competitors going to an in-person competition and a smaller crowd.

Bhavsar said although the spelling bee was adjusted, she was glad it still happened — and the changes, in her mind, made the process slightly easier.

“There were a lot less people there, and honestly, it felt a bit easier because you couldn’t really see their faces,” Bhavsar said.

Now, Bhavsar is preparing for the statewide competition that will be held in March. The details of the competition’s format are unknown at this time, though there will likely be an online component, she said.

Amber Jackson, the Sunflower State Spelling Bee coordinator for the Kansas Press Association, confirmed others have won multiple years in a row, but KPA has only hosted for three years — so records of those who won back-to-back like Bhavsar aren’t available.

While winning the Johnson County bee two years in a row is exciting, Bhavsar said she’s looking forward to actually competing at the state spelling bee this year after the 2020 bee was canceled due to COVID-19.

“I’m excited because last year, I didn’t actually get to compete at state because of the pandemic so I’m excited that I get to this year,” Bhavsar said.