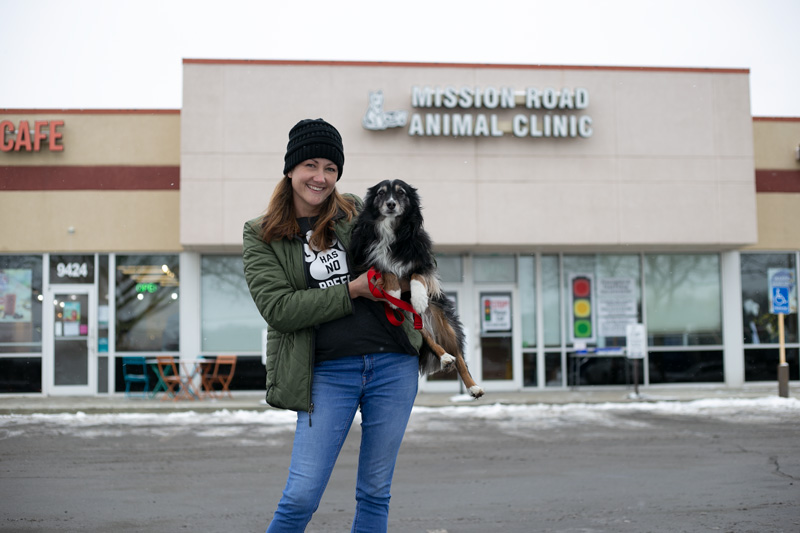 Several weeks into the vaccination rollout, most of the veterinary technicians at Mission Road Animal Clinic have received their first dose. As manager of the clinic, Melissa Geffert observed firsthand the tenacity of their vet staff, who pushed aside fear and anxiety of the coronavirus to offer essential services from the start of the pandemic in March 2020.

For now, the clinic offers “no contact” services and occasionally virtual appointments for new pet owners to meet the large influx of puppies and dogs adopted during the pandemic.

Although she has no formal veterinary degree, Geffert has always been around animals and spent most of her career in an animal hospital or veterinary clinic. A lifelong native of Prairie Village, Geffert originally pursued veterinary studies in K-State’s program. But her passion for music took her back to the Kansas City area, where she studied vocals and earned her music degree from the University of Missouri-Kansas City Conservatory.

She sings in a local classic rock band called My Oh My! — she’s in the band’s two albums, Wouldn’t Have It Any Other Way and The War Outside — and she has taught singing lessons. Geffert also spent much of her singing career at the Unity Temple on the Plaza.

In her spare time, she loves to bake (especially cupcakes), experiment with new cooking recipes in the kitchen, walking her dogs, reading a good mystery novel and entertaining company on their back patio. She lives in her hometown with her husband, Adam Geffert, their two daughters, Hannah and Sydney, and dogs Walter and Scarlett.

When the world started to shut down, we really weren’t sure what was going to happen. Shortly after things started closing, we did get notification that veterinary hospitals were considered essential. We were unclear as to what that really meant, particularly, or what that meant for us, but we knew that meant that we were going to be open.

When the notice came that the next Monday, the city — and when I say city, I mean the metro — would be on lockdown, and the kids weren’t going to school, and you weren’t able to go do anything that wasn’t essential, we were inundated with more phone calls of panicking pet owners than I have ever heard in my entire life: Wanting to up-order medication for months, and dog food, and things that they were sure that we were going to be closed and their pet was going to need things and we wouldn’t be able to help them.

We were trying to assure people that we were going to be open and we can fill your meds but calm down, we’re essential, we don’t know what that means but we’ll be here.

So shortly after that, we locked our doors and we started handling everything curbside, which was kind of what I saw on a lot of the forums that I’m on across the country with managers of hospitals.

Those girls were there every single day. They left their kids at home when they didn’t have school. And they found family members to watch their kids, they came in, and we were still able to offer exceptional veterinary care and fill the meds, all of the things that people were worried that they weren’t going to be able to do, they were still able to do.

I do think it speaks volumes for the culture that my boss has really made in the clinic. I know there are other clinics, maybe not here, but just from forums and things, I know that there are clinics with cultures that are not as positive and not as family-like as ours is.

I’ve always known that the girls are essential. The place can’t run without the girls who are there treating every single pet like it’s their own. But you don’t really necessarily always think of that until it’s something like this where people are worried that they won’t be able to get that care and then they start to panic.

We found out maybe not quite as firsthand as we would have expected that the veterinary community was in phase 1B of the vaccination rollout. But we had to verify with Johnson County, because I know Johnson County is woefully behind in their vaccination, just because they don’t have enough.

Nobody wanted to skip the line by any means, but we did get confirmation from the county that veterinary employees were indeed on the list in phase 1B.

As soon as we got that confirmation, we have been nonstop trying to get scheduled for vaccines ever since. It was basically a refresh-the-page-and-wait-for-things-to-show-up kind of a situation all the time.

There haven’t been any available until Friday (Feb. 5), when a whole bunch of them opened up. We’ve been waiting three weeks and finally, we were able to get signed up and most of the staff is getting their first dose this week.

I do really think that being able to get that vaccine this week has been a really validating thing for the girls who have maybe put aside the anxiety or the fear they had and came to work anyway.

There is something about this entire rollout of vaccinations for something we’ve never seen before that’s kind of an interestingly historic situation to be a part of. And I’m hopeful that everyone who was considered essential is getting one sooner rather than later because we are not the only ones who had our doors open or were there all the time worrying about what might be coming in or going out by any means.

I think the biggest thing, especially to understand, is that even though the doors have been closed, we have been no less busy than we were before, and we’re just doing our very best. And while everybody is in this weird situation together, everyone’s journey on it is different.

I just hope that everybody who is going through any of these things is really, really treating everybody as kindly as they can. Because everybody’s day is hard. It’s hard no matter what you’re doing. Being nice goes a really, really long way.