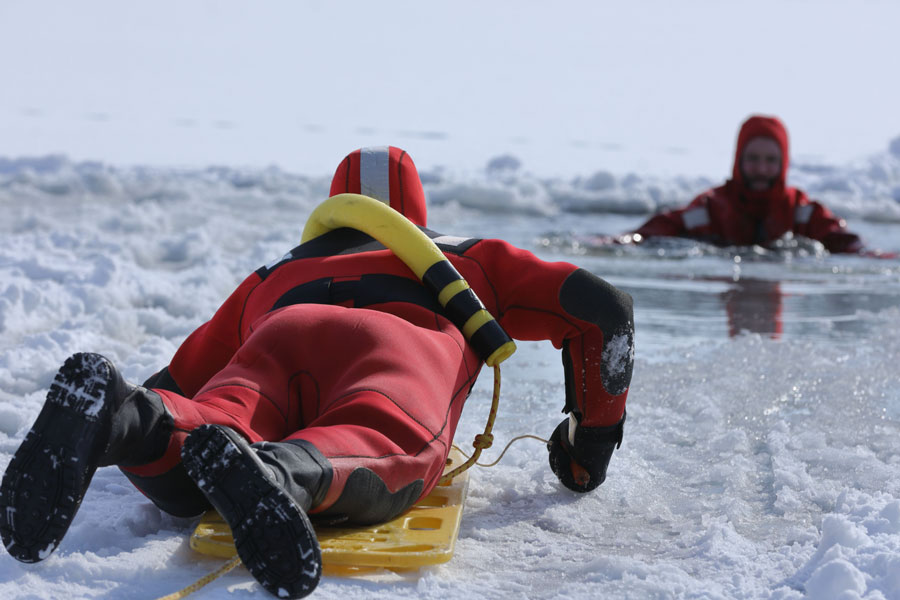 It's been three years since it had been cold enough for a local pond to freeze over enough for the Overland Park Fire Department to practice ice water rescues. Above, a firefighter using a backboard as a sled pulls himself towards a hole in the ice where another firefighter playing a victim is floating. Photo credit Mike Frizzell.

With the help of the recent arctic blast, the Overland Park Fire Department practiced their ice water rescue skills. A snow-covered South Lake Park and its ice-covered lake became the department’s training site on Friday afternoon, when temperatures still hovered below freezing.

Firefighters estimate the ice was about six to eight inches thick but cautioned that it would quickly thin and become very dangerous for humans and pets with the forecasted temperatures expected to reach into the 60s this week.

Tyler Carey, one of the firefighters who helped put on the training, described ice water rescue calls as being very high risk and very low frequency.

Ice water rescues are an event that Carey says all firefighters in Overland Park are trained to respond to effectively but hope they will never have to use.

“We don’t run these types of calls very often, and obviously, time is of the essence when getting to these people that are trapped out on the ice, out in the water,” Carey said.

The Overland Park Fire Department says they have a response time to most areas of under six minutes. According to Carey, even with a quick response, it doesn’t take long for freezing water’s dangers to have a severe impact after someone falls through.

Overland Park firefighters are trained in different rescue techniques, from coaching victims through a self-rescue to firefighters entering the frigid waters themselves to effect the rescue of a potentially unresponsive person.

Carey says the department takes advantage of ponds when they ice over in order to practice these scenarios and techniques whenever it is cold enough to do so, but it has been about three years since the ice has been safe enough to use for this kind of training.

“You can’t really say one way or the other exactly when these types of calls take place or they are going to happen,” Carey said. “We highly suggest that no matter the temperature, no matter the situation, if it isn’t a regulated area to be out on the ice, we highly suggest don’t go out on it; it’s not worth the risk.”

The department says that if you see a person or a pet fall through the ice, call 911 immediately and never go out on the ice and attempt to rescue them.