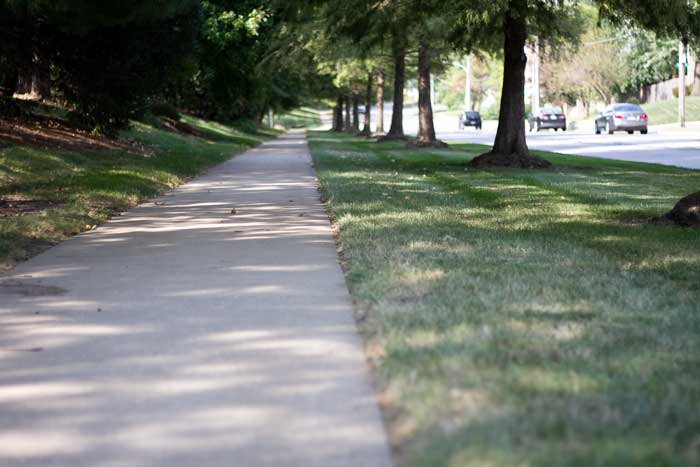 Lenexa's city code changes would require wider sidewalks and trails, and intermittent trail connections between homes in residential subdivisions. Above, a file photo of a section of trail along Lackman Road in Lenexa.

After more than an hour of discussion, the Lenexa City Council last week unanimously approved city code changes that call for wider sidewalks as well as trail connections between homes every 800 feet.

The changes are a prompt from city staff to improve connectivity, ease of access and safety issues for bicyclists and pedestrians, as recommended by the city’s Complete Streets plan.

The plan, which the city accepted in December 2019, is intended to guide development of pedestrian and cycling transportation channels through the city.

In a letter to the city, the Home Builders Association of Greater Kansas City argued that additional construction costs to make residential areas more walkable and bikeable will ultimately be passed on to home buyers.

That could be an issue, the group said, at a time when there are concerns about a growing lack of attainable housing — defined by some as unsubsidized housing that can be afforded by those making at least 80% of an area’s median income.

Another code change will require developers to build trail connections between residential homes for every 800 feet in a block.

“As we talked about this, the one thing that really stuck out to me is very few people want this cut-through in their back yard,” said Councilmember Joe Karlin. “So why are we putting them in here if nobody wants this in their back yard?”

City staff and some councilmembers said connectivity created by the plan will help pedestrians have more ease of access to neighboring streets, especially those who live in a cul-de-sac.

“I think that’s the goal, is just to prevent dead ends,” said Councilmember Julie Sayers. “There just should be maybe one or two opportunities to create less dead ends, and that’s the way I view this.”

When developers propose new projects in undeveloped parts of Lenexa, the city will consider these new city code requirements for public transportation channels. Councilmembers expressed the desire for the city to work with developers to address concerns moving forward, especially surrounding development costs and safety issues against pedestrians.