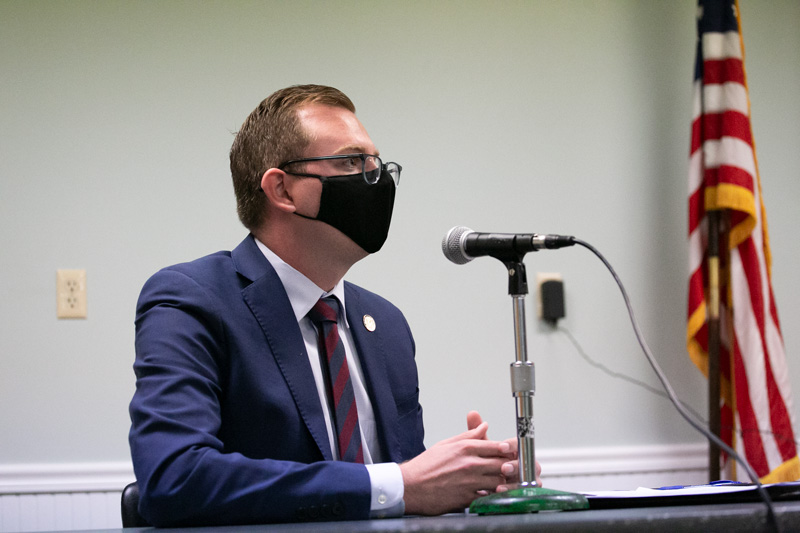 "Under current law, Kansans can be denied housing or refused business because of who they are or who they love," said State Rep. Brandon Woodard, a Democrat representing District 30. Above, Woodard at the Post's 2020 candidate forum.

Each week, we provide Shawnee Mission area legislators the opportunity to share their thoughts about what’s happening in the state capitol. Rep. Brandon Woodard, Rep. Mari-Lynn Poskin and Sen. Pat Pettey are scheduled to send updates this week.

Below is the submission from Democratic State Rep. Brandon Woodard who represents District 30.

As I have written about before, Kansas’ top exports include transportation equipment, food and agricultural products, and college-educated young people. This concerning trend of working-age adults leaving the state outpaces our population gain by birth.

If you’re wondering why this trend is occurring, look no further than the Kansas Statehouse. In the first six weeks of the legislative session, the ultra-conservative leadership has fast-tracked bills that would strip away the constitutional right to personal bodily autonomy, give tax breaks to giant, multinational corporations, divert funding away from our public schools, require genital inspections for women’s athletics, and those are just the biggest bills they’re pushing.

While we do not have mountains or oceans to attract people to the Sunflower State, we can end the extreme agenda coming from Topeka and instead work on policy that resonates with young people.

Here are a few of the issues we should work on to make Kansas an attractive, inclusive destination.

In recent years, several cities throughout the state have passed LGBTQ anti-discrimination protections for their residents; however, we must modernize our Kansas Act Against Discrimination to extend these protections statewide. Under current law, Kansans can be denied housing or refused business because of who they are or who they love.

Kansas is one of three states that has not legalized medical marijuana, putting us at the bottom of the list of making progress on this issue. Making medical marijuana legal in Kansas is common-sense policy for an agricultural state, and it’s overwhelmingly supported by the people. While I will support medical marijuana when it comes to the floor of the House of Representatives, I believe we must begin the conversation about fully legalizing marijuana in Kansas, regulating it, and using the revenue it would generate to fund state services. Last week, I authored a full marijuana legalization bill with Representatives Haswood, Vaughn, Xu, and Parker and will be asking for a hearing for the bill.

The average university graduate in Kansas has around $28,000 in student loans. Kansas should provide an incentive to businesses that include student debt relief in the benefit packages they offer their employees. Additionally, we should consider student debt forgiveness to keep an educated workforce in Kansas. According to the National Conference of State Legislatures, 18 states created or modified loan forgiveness programs to provide borrowers with debt relief or payment support in exchange for work or service in specific fields.

One of the top issues that came up with constituents while campaigning in 2020 was the desire to legalize sports wagering, especially during the Chiefs’ football season. States with similar models to what Kansas is considering could generate between $5 million and $10 million in tax revenue annually.

As we work to rebuild the post-COVID economy in Kansas, we must increase the minimum wage. Right now, a full-time, minimum wage worker makes $15,080 a year, or $1,257 each month. I’ve co-sponsored a bill that would implement a phased-in adoption for a $15 minimum wage by 2027. A livable wage for a full-time job should be a right in Kansas, not just a privilege.

These policies are supported by a bipartisan majority of voters in Kansas, and would restore our national image of being a state that is open, inclusive, and inviting to all. We know that expanding access to healthcare, relieving student debt, adopting a living wage, and making Kansas fun will have a positive impact on reversing the trend of college-educated young people leaving our state.

If you have ideas for policy that we could be working on in Topeka, please reach out at brandon.woodard@house.ks.gov or (785) 296-5593. It is an honor to represent District 30 in the Kansas House of Representatives.