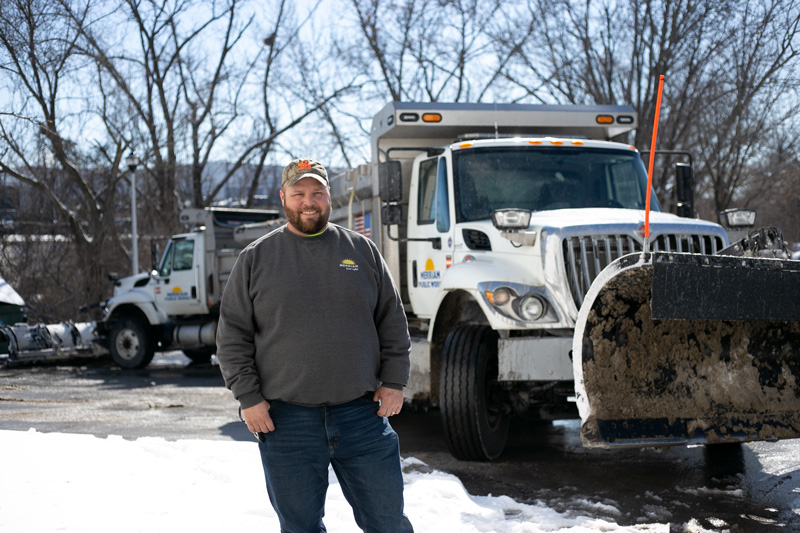 With all the snowy, frigid weather the past couple of weeks, Roby Bielak and his snow plowing crews in Merriam have been hard at work treating and clearing the city roads.

In fact, the entire Shawnee Mission area has seen days of dangerously cold temperatures and regular flurries, which hinders all snow plowers’ progress. But they keep at it, and it will get easier as the temperature rises above freezing this weekend.

An Arizona native who spent the first part of his childhood in Saudi Arabia (his father was in the airline industry), Bielak came to the Kansas City area to finish his high school degree in Kansas City, Kansas. His first job out of high school was summer work in Merriam, and he’s never looked back, rising the ranks to his current role as foreman. He oversees snow plowing and all traffic-related efforts.

A self-admitting workaholic, Bielak regularly clocks in 70 hours because he also runs his own lawn care company. He lives in Shawnee with his wife of 17 years, Kimberly Bielak, their three sons, a parrot and some cats.

In 24 years, I don’t remember it being this cold for this long and having these kinds of issues.

Usually, it’s treated, you come back later, push it off, and you’re good. As you’re plowing, pushing the stuff off the street, you’re dropping material behind you to melt it so you can slush it up on your next pass.

A typical storm, usually above 20 degrees, you can put the salt material down and it’ll melt it. It’ll slush it up, you can push it off, and you’ll get pavement.

There’s a lot of monotony in it. I don’t know how many times you’ll see the same street in the same storm. You’re going around in circles and you’ll do the whole area, I went through there three times, it just adds up. You go home to sleep, get up the next day, you go do it again till everything’s what we call running water.

We kind of take pride in our, what you call it leaving it in running water. Wet pavement. You get it down to melt down to where the pavement’s wet, the ice is melting off and running down the curb line.

It takes an hour or two for the material to start working. So by the time you get through your whole area, you can circle back to where started and it should be slushing up by then, and you can push more off. I would say the plows are probably in the neighborhood of 25,000 pounds because you’re carrying 9 tons of salt in your hopper.

This particular storm has not been fun at all. I say that because it seems like we’re chasing our tail. It seems like we can’t get it to go away. It’s stubborn ice, it’s like an ice pack. Once you go over snow enough times, it melts, it freezes, it melts, freezes, it turns into ice. It’s been an ongoing issue. We love above freezing around here (laughs).

The sun coming out is kind of the missing ingredient. Now, the sun is actually working in our favor today (Tuesday), so we’re living it up right now.

The material is working with the sun to kind of slush up the ice pack so they can push it off the road. Now we want it to freeze dry, because otherwise these wet roads are going to freeze tonight, causing more of an issue. So we have to lay more material, keeping it from turning to black ice or any more ice pack.

The game plan for tonight would be to push off what we can, utilize the sun as long as possible. We’ll probably end up staying past rush hour because as soon as that sun goes down, everything stops. I mean, the material’s not working. We’ll put down more material to give the residents’ traction, and that’ll at least get them through till the sun’ll come back out tomorrow.

Now, believe it or not, even though yesterday when it was cloudy, the sun was up, it was light, that actually still helps, having daylight. So we gotta keep pushing, pushing and stay on it, eventually it scrapes off.

Our normal work hours are 7 in the morning to 3:30 p.m. If you came in at 7, you’re still going to be working till midnight. So basically that 12-hour shift turned into a 17-hour day.

We’ve been working till midnight the past two nights. We go home, you can’t get to sleep till 2 o’clock. By the time you shower, your body is just all wound up. You’re wound up, kinda hyped up from going, going, going. And the strobes (flashing lights), they kinda give you the strobe effect.

Then you gotta get up at 6 a.m. to show up at 7 a.m., so you’re getting three hours of sleep. So basically in the last three days I’ve gotten six hours of sleep. I require eight hours… at least.

Currently, a full storm for us is five trucks. We’re at max right now because we want all hands on deck. We have a hype to live up to. But when you have these frigid conditions going on a week and a half, two weeks, it’s hard to get this stuff to melt. So we just gotta stay on it.

Just ‘cause the storm ends doesn’t mean my day is done. Those guys are still out there busting their tails trying to get that stuff off the street. When you have the running water, there’s no slick spots, it’s safer for everybody.

I personally — and I’ve heard this numerous times — that we have the best streets in Johnson County because of that standard. It makes us feel good, just a pat on the back.