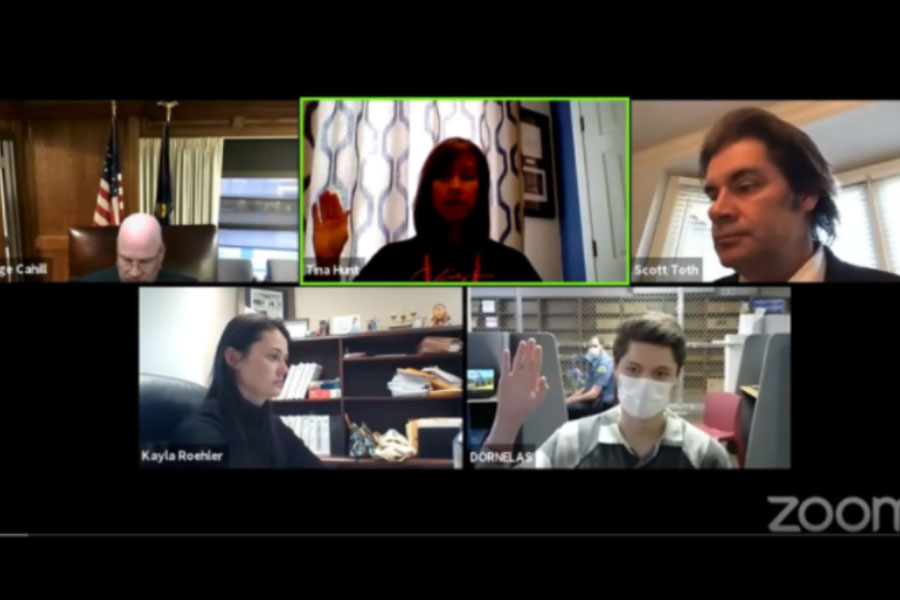 Andrew Manakul, then 19, pleaded guilty to two felony counts of voluntary manslaughter in Wyandotte County Court and received probation. Above, Manakul (at bottom right) being sworn in to his hearing on Zoom. Image courtesy Division 8, 29th Judicial District Of Kansas, Wyandotte County.

The plea deal had been arranged and was playing out on a Zoom in five boxes: judge, court reporter, prosecutor, defense attorney, defendant.

Andrew Ray Manakul appeared in the small square on the bottom of the screen during the call last October, the slight 19-year-old wearing the gray-striped uniform of the Wyandotte County jail, a mask across his face and a sheriff’s officer across his right shoulder.

Manakul, from Shawnee, had been involved in a March 2, 2020, drug deal in Kansas City, Kan., that ended in the murders of two young Wyandotte County men, according to prosecutors. He could have received the maximum of more than 25 years. But on January 6, 2021, the judge Cahill gave him probation.

The family of one of their victims, 19-year-old Julian Frank, fears that the second person charged in his murder will also go free. Frank’s aunt, Jenessa Frank, said she understands that her nephew was killed while engaging in a criminal act, but she said the price each participant is paying is patently unfair.

“You mean to tell me that these kids that did it have no consequences to pay for their actions, but Julian is laying six feet under right now?” Frank said. “He paid the ultimate consequence and we’re going to smack them on their hands, like, ‘Oh, shame on you.’”

Roehler said Manakul had a Snapchat conversation that day with Frank, who asked Manakul if he had any marijuana. Manakul passed his phone to Ridings, “to help facilitate a drug transaction,” she said.

Manakul then drove Ridings to the drug deal, Roehler said, near an apartment complex in the 1000 block of Forest Court in Kansas City, Kan. Frank got into the backseat of the car. Another man, Abdu Wana, also 19 and from Kansas City, Kan., came up to the car and pulled a gun on Manakul and Ridings, Roehler said. But in the end, Ridings shot and killed Wana and Frank.

Although Manakul may have thought that he and Ridings could act in self-defense, Roehler said, in fact “that belief was unreasonable because of the circumstances, that being he engaged in an inherently dangerous felony, that being a drug transaction.”

During the January 6 sentencing in Wyandotte County Court, Jenessa Frank and her family were surprised when the judge, Cahill, began to read from letters Manakul’s friends and family had sent the judge.

Cahill commended Manakul for having a job lined up and starting a program to help the homeless, Frank said, which left the Frank family stunned. Cahill did not return a phone call seeking comment.

Manakul posted about the homeless effort, on Facebook on Feb. 2 of this year, saying he’d started a GoFundMe page to raise $1,500. (As of this week, $5 had been donated to the fundraiser.)

“Please help make a difference if you can,” he wrote. “Let’s hit that goal!”

Jenessa Frank and her cousin, Jackie, Julian’s mother, are planning on attending Ridings’ sentencing this week. Though they didn’t know anything about sending letters to the judge last time, they’d like to tell others what Julian’s loss has meant to them.

Jackie Frank had Julian when she was just 15-years-old, Jenessa Frank said, and he was her whole life.

“This was that family’s man of the house,” Janessa Frank said. “Like, he’s the one who took out the trash and locked the doors at night, make sure everybody was safe.”

“This is a life sentence for Jackie and her family.”

Ridings was set to be sentenced Wednesday in Kansas City, Kan.