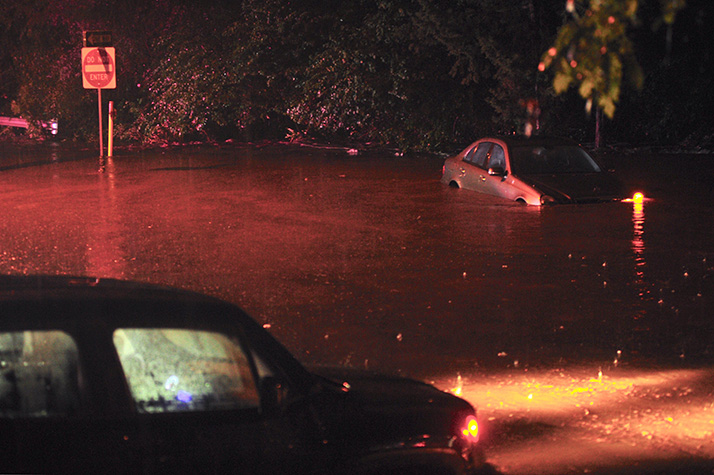 Prairie Village is beginning design work for a flood control project along Mission Road near 68th Street. Affinis Corp will complete the design work for nearly $100,000. Flooding along the stretch of Mission Road just north of the Shops of Prairie Village has caused tens of thousands of dollars worth of damage to property in recent years. File photo credit Don Austin.

Flooding along Mission Road between 67th Street to 69th Street has been a persistent issue in Prairie Village for years. In 2018 for example, torrential rains sent Brush Creek pouring over the section twice, causing hundreds of thousands of dollars in damage to area homes and property.

The city Tuesday continued its efforts to curb the problem, and councilmembers unanimously approved a design contract with Affinis Corp for a flood control project along Mission Road near 68th Street.

Why it matters: Cities throughout Johnson County grapple with stormwater issues, and Prairie Village is no exception. The city is spending nearly $100,000 on the Mission Road and 68th Street flood control project, and secured funding from the Johnson County Stormwater Management Program after a 2018 preliminary engineering study was completed, according to city documents.

The details: The project consists of the design and construction of roadway and stormwater improvements along Mission Road, according to city documents. During this design phase, Affinis will “perform topographic and field data collection,” develop two unique design options and engage with city staff and the public.

What’s next: Design work will begin following initial consultations with city staff. Construction on the Mission Road stormwater improvements will begin in 2022, according to city documents.