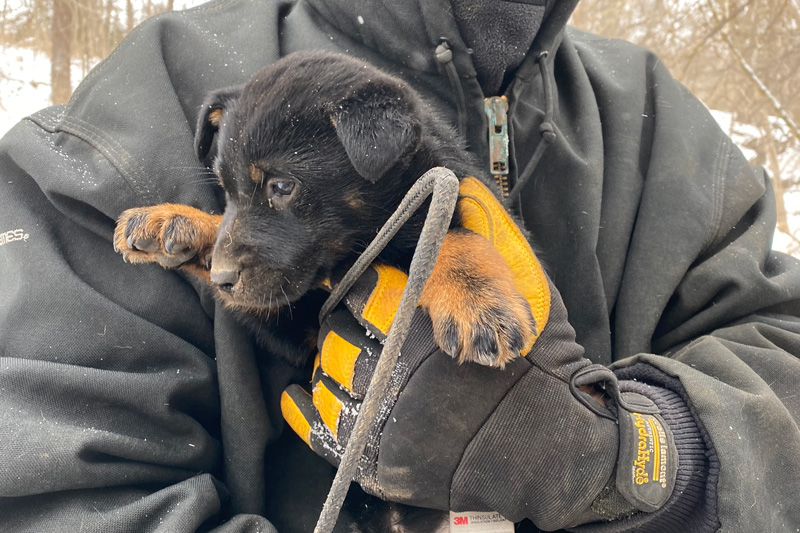 Volunteers and staff with Melissa's Second Chances in Shawnee braved the sub-zero temperatures last weekend to rescue a couple of puppies that were tucked away in a foxhole. Above, Richard Blakeman the homeowner near Cameron, Missouri, who has been caring for the dogs as best he can, clutches one of the puppies Sunday morning in frigid temperatures. Photo courtesy Celia Kistner.

Melissa’s Second Chances is back to the rescue again, this time in frigid temperatures.

The Shawnee-based animal rescue shelter has brought in more than 20 dogs rescued from the same rural Missouri property over the past two months. The most recent rescue mission took place over two days this past weekend, when temperatures plunged below zero.

Deborah and Bill Griffin of Shawnee, volunteers with Melissa’s Second Chances, and one of the shelter’s staff members, Celia Kistner, ventured out in the unusually cold weather to retrieve the dogs, which had been sheltering outdoors in Cameron, Mo., northeast of Kansas City.

In terms of climactic conditions, it was the complete opposite from the mission the shelter’s volunteers went on for a puppy rescue last summer.

Richard Blakeman lives near Cameron with his family and has offered his farmland as an informal shelter for stray dogs for years. But recently, it’s gotten to be a bit too much to handle.

Around Christmas, more than 50 dogs were living on the property, and Blakeman was having trouble caring for them, including trying to spay and neuter them.

“The homeowners [Blakemans] are super nice, and they’ve been looking for help for so long, almost five years, to get some of the dogs off the property,” Kistner said. “They were taking them in to make sure they were safe, because they were strays. But you can only fit so many dogs in a house, and they just didn’t have the means to take care of all of them anymore.”

In December, Melissa’s Menagerie — an animal grooming and care center affiliated with Melissa’s Second Chances — brought back seven dogs from the Blakeman property, three of which were pregnant and ended up delivering a combined 25 puppies.

Then, the Blakemans asked the volunteers with Melissa’s Second Chances to return this past weekend to rescue a few more dogs.

On Saturday, the Griffins returned to the Blakemans’ to pick up 11 additional dogs.

However, one dog was left behind that day because she had recently delivered her own litter of puppies in an old fox den on the property and the volunteers were not able to reach them.

So, the Griffins returned with Kistner on Sunday —Valentine’s Day — in bitterly cold weather trying to fetch the puppies in the old fox den.

The temperature outside was -2 degrees that day with wind chills of more than -20 degrees. And it had recently snowed, too.

“I just could not get them off my mind,” Kistner said. “I was like, these poor puppies are going to freeze to death if they’re out there. I definitely need to go back and get those puppies.”

Kistner and the Grifins crossed a frozen creek to get to the old fox den.

They then used a hammer, chisel, axe and shovel to break away frozen mud, a large root from a tree, some brush and a deer carcass the mother dog had dragged inside to feed her puppies.

The puppies were probably a foot or two underground, the rescuers surmised.

After the digging and chopping of brush, Kistner crawled into the foxhole to snare the two puppies. The whole process took about four hours.

The two puppies rescued from the fox den have been named after Blakeman’s late wife, Shelia, and stepdaughter, Krystal.

Being prepared for adoption

All told, Melissa’s Second Chances took 20 dogs from the Blakeman property. That, plus the 25 puppies that have been born since make for quite a winter time influx of new potential adoptees.

“It’s pretty incredible, actually, that we even managed to get them,” said Deborah Griffin. “It’s almost impossible to believe.”

The Shawnee shelter and the Griffins have already raised about $4,000 combined to help fund efforts to give the dogs shots and get them fixed, including some of the dogs that remain on the property in Cameron.

“We’ve had such a great response from the community from that, which was really awesome,” Kistner said.

Some of those dogs and puppies have already been adopted, while others are now ready for a new home.