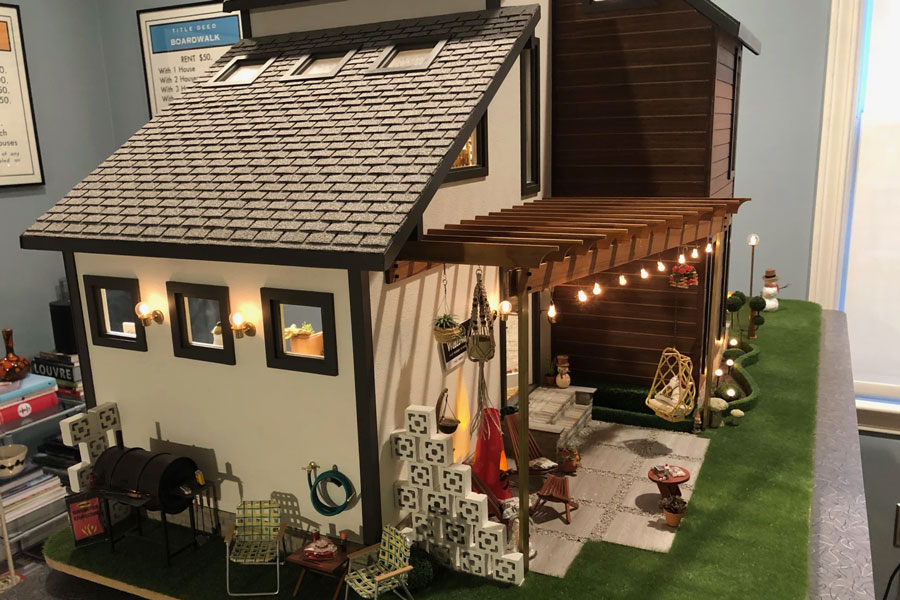 Credit Scott Miller for getting the word out about his parents’ unusual pandemic project.

“It is, quite literally, a miniature marvel,” he bragged on Twitter, “and the world needs to see it.”

Miller, the editor of a sports betting network, shared photos late last month of what his mother and step-father have been creating: the Mini Modern House. That first tweet, followed by a flurry of additional tweets with photos and details, went viral — and now has nearly 228,000 likes.

Functioning electricity, a high-ceilinged master bedroom, two children’s bedrooms, a garage, a boiler room, and a laundry room — plus a man cave.

Four fireplaces lit with glowing logs, and a front walk lined with luminaries. Teak wood installed on outdoor decks and the pergola. And, of course, Kansas City barbecue ribs on the grill. No detail has been overlooked.

“I endlessly made fun of my mom when this project started,” Miller tweeted, “but I’ll be damned, this is one of the coolest things I’ve ever seen.”

Annie Kampfe got the idea for the project back in 2018. She and her husband, Cliff Donnelly, are both retired, and he had just returned from an annual golf trip.

They started with a brick-and-mortar dollhouse kit, bought for about $300 from a store in New Hampshire, and altered it to make it even more mid-century.

“We ended up re-cutting quite a bit of the kit and adding windows, adding more skylights. So that was the initial challenge,” Kampfe said. “You know, how do you cut out a little window that’s three by six? And there’s a big difference between normal tools and miniature tools.”

Donnelly served as construction manager, and Kampfe drew on her background as an interior designer — and as a parent.

“I have five daughters and two sons,” she says, “and all my girls will tell you, they had some form of a miniature house, you know, that they played with, all five of them.”

She didn’t work on the project every day at first. But the pandemic changed that.

‘Things I remember from my childhood.’

Like most people, safety measures caused Kampfe to curtail activities to stick close to home, except for daily visits to her 91-year-old mom, who has Alzheimer’s disease. With less going on, she was able to work on the miniature home seven days a week.

A lifelong needle pointer, she created a variety of objects in the house, such as the rugs, and purchased or commissioned others, like the mid-century light fixtures and furniture.

“Everybody in my whole family is represented in the house,” Kampfe says. “Definitely things I remember from my childhood, but certainly my kids’ childhoods too.”

A pipe stand as a nod to a grandfather who smoked a pipe. A set of Mickey Mouse ears on the basement stairs, a favorite of a granddaughter. Dinosaurs, a Monopoly board game, and puzzles — some of her kids’ favorite toys.

“There’s a really cool vintage little copper newspaper holder, a mailbox right outside the front door,” Kampfe describes. “And there’s the Wall Street Journal tucked in there. My dad read the Wall Street cover to cover for as long as I can remember.”

For now, she says, she and her husband plan to take a break. Although her kids are curious about what she’s working on next.

KCUR 89.3 is Kansas City’s NPR affiliate public radio station. You can read more of their reporting at kcur.org.