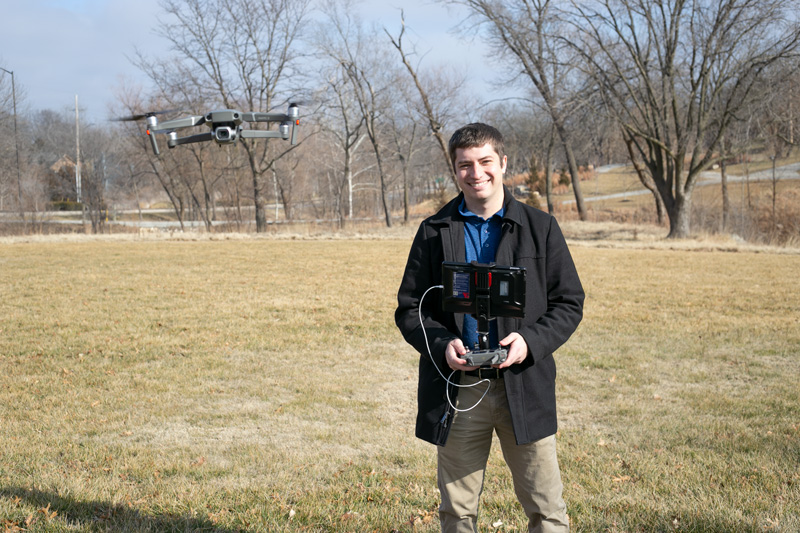 When the COVID-19 pandemic brought nearly everything to a sudden halt, airline pilots like Matt Clark were grounded due to the economic challenges. A professional pilot for the past nine years, Clark is still employed with a major commercial airline. For now, he’s taking a pause as the airline industry recovers.

So, with more spare time than usual on his hands, Clark started up a business as a commercial drone operator. He takes sky-high pictures and videos for his customers. A member of Blue Nose Aerial Imaging, a network of professional pilots getting into the drone industry, Clark has been in business since November 2020.

Born and raised in Des Moines, Iowa, Clark earned his aviation degree at the University of Nebraska-Omaha. An up-and-coming member of the Libertarian Party, Clark was recently named the political director for the Libertarian Party of Kansas. In 2020, he unsuccessfully ran for House District 23. He also serves at Lord of Life Lutheran Church in Leawood and volunteers for homeless services.

He lives in Overland Park with his wife, Rachel Clark, their young daughter and the family dog.

It’s fun to get something in the air, even if it’s not me.

You need waivers to go above 400 feet, but I’m pretty sure this thing can go up to like 19,000 feet. The drone I fly has a really high-quality camera on it, I believe a 20 megapixel camera. It can produce 4K video and go up to 44 mph.

My interest in aviation started with, really, my first flight. It was just down to Disney World in middle school, getting to go up and see the cockpit and the flight deck. That hooked my interest. Just the chance to operate such a large piece of machinery, all the bells and whistles, the entire flight deck full of instruments just looked like it was a challenging, fun role.

As I went through high school and teachers and counselors were suggesting different careers, they all involved sitting at a desk all day. It really didn’t interest me. Aviation just kept pulling me back.

So I went to college for aviation and started flying. And once you took that first flight, there was really no turning back.

I flew one day from Council Bluffs to Des Moines in the clouds the entire way, and popping out of the clouds after an hour flight, at night with the runway lit up and downtown Des Moines in sight on the other end of the runway, that was just such a fun feeling of accomplishment.

The airline industry was absolutely booming in the winter of 2020, and COVID just decimated revenue for the airlines. I was aware, being a relatively new pilot at my current airline, that I was probably on the furlough block.

I was just trying to figure out how am I going to pay the bills and make sure that I can keep my family at the house we’re at, and still make sure I have time at home with the family too, and have the quality of life that I was enjoying at the time, or as close to it as possible.

So as the picture became more clear that I wasn’t going to lose my entire income, it seemed like a great opportunity to go into business for myself.

In August, I saw the Blue Nose founder on a podcast for a pilot interview prep company, and he was talking about wanting to open up a franchise network of professional pilots getting into drone operations. He saw that there’s a lot of inconsistency in the quality of drone products across the country, so he wanted to start a network of franchise owners across the country who could bring that airline and military level of professionalism and consistency into the drone field.

I’d thought of drones before but I didn’t really know how to get into it. We’re just starting to unleash the potential of drones, so that’s what attracted me to a network of other professionals from a similar background.

That’s just what attracted me to the network, so that I wouldn’t just be starting this alone, that we’d have a network of support. We’re aviation experts but we have a photographer there to teach us all how to become a photographer in addition to a good pilot.

It’s just been a lot of fun because of the potential in the drone industry. My initial impression was just a lot of photography and videography, but that is really just scratching the surface of the potentials of drones.

There’s so much potential uses of drones besides just basic pictures. Doing roof damage inspections. For example, railroads are using drones for bridge inspections and safety compliance. There’s all sorts of mapping potentials as well. There’s all sorts of agricultural uses for drone mapping. You can get a lot of plant health data from drones. And we’ve also partnered with a company providing software to do turf management for golf courses.

One of the things that has disappointed me in my time as an airline pilot is not being allowed to take pictures from the flight deck. And we also can’t have family members in the flight deck to see what we do, like they used to allow before 9/11.

So the drone photography has been enjoyable because I’m starting to be able to capture some of that beauty from the air that I’ve tried to describe before.

But the other part of getting into the drone stuff is, while I miss flying, I was gone at least half the month before as a full-time airline pilot. So, I’ve really enjoyed getting to work from home and spend a lot more time with the family than I would have been able to otherwise if COVID had not hit. That’s some of the silver lining, if you will, of this.