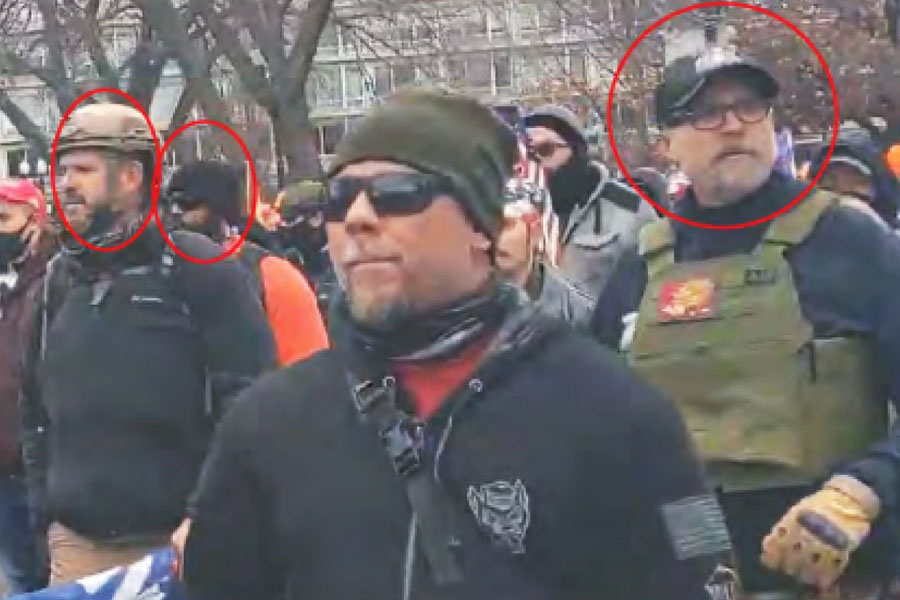 William Chrestman of Olathe, circled at right in glasses, Christopher Kuehne of Olathe (left in tan helmet) and Louis Colon of Blue Springs, (on left in orange jacket) in a photo released Thursday as part of a federal criminal complaint charging them in the Jan. 6 raid on the U.S. Capitol. Image courtesy FBI.

Dressed for battle in camouflage pants, a green tactical vest, black boots and a black baseball cap, William Norman Chrestman of Olathe was at the front of the line of rioters who faced down U.S. Capitol Police on Jan. 6.

A rolled-up Trump flag was in his hand which would later be unwound to reveal a wooden club or ax handle. Orange fluorescent tape marked his helmet, which he carried at his hip.

As U.S. Capitol Police moved to arrest one of the rioters, Chrestman threatened that he’d shoot them. Then Chrestman turned to the crowd and shouted:

“Whose house is this?”

The crowd roared back: “Our house!”

“Do you want your house back?” Chrestman yelled.

Chrestman, along with Christopher Charles Kuehn of Olathe and Louis Enrique Colon, of Blue Springs, Mo., were arrested by the FBI Thursday, charged with coordinating their efforts to storm the Capitol on the day Congress was set to certify the Electoral College vote.

A federal criminal complaint unsealed Thursday says the three, along with two others from Arizona, are alleged to be part of the Kansas City Proud Boys, a division of the larger white supremacist group.

Through gestures and other communication, including the orange tape which marked them all, the five worked together to thwart the police and enter the Capitol. Chrestman is also charged with threatening a law enforcement officer.

Video found on social networks, along with surveillance tape, showed the three working together and consulting other known members of the Proud Boys, the complaint said.

They were along the first line of rioters who pushed back on police, grabbing the waist-high metal barriers meant to hold them back and then obstructing metal gates meant to keep crowds from tunnels underneath the Capitol.

More than 200 people have been charged in the insurrection at the U.S. Capitol after a rally with then-President Trump, who urged the crowd to “fight like hell.” Among those charged, approximately 17 are said to be members of the Proud Boys.

Chrestman was arrested on federal charges of conspiracy, civil disorder, obstruction of an official proceeding, threatening to assault a federal law enforcement officer, knowingly entering or remaining in any restricted building or grounds without lawful authority and disorderly conduct on Capitol grounds.

Kuehn and Colon were arrested on federal charges of conspiracy, civil disorder, obstruction of an official proceeding, knowingly entering or remaining in any restricted building or grounds without lawful authority, and disorderly conduct on Capitol grounds.