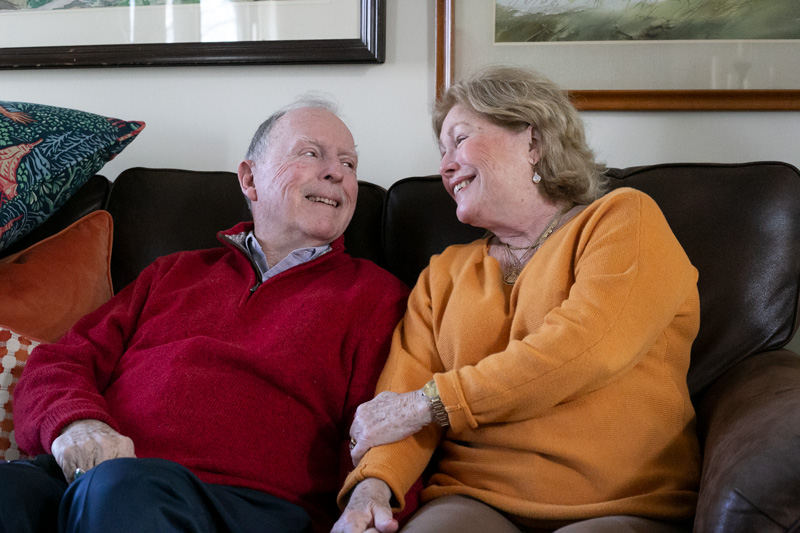 Bob and Dianne O'Connor have been happily married for 53 years. Bob was diagnosed with Alzheimer's disease a few years ago. While he forgets things, their love and affection for each other is strong.

Every morning, Bob and Dianne O’Connor go on a date.

It starts with some of their favorite records, mostly by Italian singers like Luciano Pavarotti and Andrea Bocelli. With cane in hand, Bob dances around the room with his wife of 53 years. Later on, they flip through their photo albums, recalling long-ago memories from travels, holidays and their wedding.

“All the time while they’re doing this, their hands are locked,” said Kathleen O’Connor-Hoover, their daughter. “My dad never lets go of my mom. Their hands are always intertwined. They’re always right next to each other. It’s just beautiful, hearing all their memories and the stories that they have.”

Bob gets entranced a bit when he looks at those old photographs, and he smiles when those memories come back. It’s unclear what he remembers, but he has a smile on his face nonetheless. He’s with the love of his life.

Bob lives with Alzheimer’s, a progressive disease that results in memory loss and confusion. Every day is a new and hopeful day for the O’Connors, even if Bob forgets things. He has moments where he forgets who Dianne is, where he grew up, how many children they have.

It’s taken a few years to adjust to this new life, but Dianne has learned patience and to not take it personally. After all, Bob has been a loving husband. And Bob maintains his sense of humor.

Over the years, he showered Dianne with gifts and flowers, mostly red roses. He took care of things for her and gave her warmth and affection. He even wrote her love poems.

Throughout their marriage, they’ve also enjoyed once-in-a-lifetime adventures all around the world. They would go to Puerto Vallarta, Mexico, nearly every Thanksgiving. The O’Connors rode camels in Egypt and traveled to China and all over Europe.

“I’ll tell you one thing that has dawned on me: How very much he did help me,” Dianne said. “Now, it’s very obvious. I’m truly grateful. As the kids tell everyone, I was spoiled rotten.

“To tell you the truth, we’re very, very blessed,” she added. “ I have the most wonderful children in the whole world, and I have the best grandkids. And I have been extremely blessed in my husband.”

The start of Alzheimer’s

Before his diagnosis, Bob enjoyed 50 years of working in litigation. He retired about 10 years ago, when they moved from their hometown of Wichita to Leawood. For some time, Bob volunteered at Operation Breakthrough in Kansas City, Mo., helping adults earn a high school education. The O’Connors also got involved at Leawood’s Church of the Nativity.

After their move to Leawood, Dianne gradually noticed that some things weren’t quite right. Bob was getting forgetful. It was especially a tough time because she went through a tough bout of colon cancer herself.

At first they diagnosed him with dementia, then later Alzheimer’s. It took a turn for the worse when a good friend of Bob’s died a few years ago. The change took place overnight.

“At first, it wasn’t so bad; he’s a very good faker, to be perfectly honest,” Dianne said. “Since then, it’s been a steady slope. He doesn’t have a present memory at all.”

So Dianne tries every day to bring him back to their life together, sometimes starting with their wedding day.

He had just won a big jury trial, and it was also his birthday. Better yet, it was the perfect time for him to propose to his girlfriend, Dianne DeCoursey. So, he poured some champagne in a glass and hid the ring at the bottom of it.

That’s not the only thing she was thinking. Dianne had only known Bob for three months. They weren’t spring chickens. In those days, many couples got married at 19 or 20. Dianne was almost 25, and Bob was nearly 30 — but still, she felt like maybe they were rushing into things.

“Do you really want to know the truth? I thought, ‘Oh my God, I don’t know you well enough to get married,’” she laughed. “I kept saying, ‘Oh, this just is crazy.’ But I knew he was the one, and we went ahead and did it anyway.”

It was a warm, breezy day at Church of the Magdalen in Wichita, a wonderful day for a big, Irish Catholic wedding. It had rained that morning — a sign of good luck for a fruitful marriage with many children. (That turned out to be true: they have six children and seven grandchildren.)

They were married at high noon. Stepping out of the church for pictures with family, Bob leaned in to kiss his bride. A gust of wind came up and sent her veil flying high.

As Dianne shared their love story and reflected on the past 53 years of marriage, Bob sat quietly next to her, smiling as Dianne chuckled over memories and gently squeezed Bob’s knee.

For Bob, memories come and go. But their family remains optimistic.

“He used to always tell us: God writes straight with crooked lines,” O’Connor-Hoover, their daughter, said.

And every day, they still show their affection for each other. O’Connor-Hoover said that when she goes over to visit, she sees her parents stealing little kisses here and there.

“You can just see the love from my mom taking care of my dad,” she added. “And my dad, he knows in the back of his head what’s happening. He knows my mom is the love of his life and taking care of him through this, and not leaving his side. It’s every minute of the day, and I think that is pretty powerful.”

They still hold hands a lot, and enjoy snuggles with their cat, Kevin Oprah Schlitz.

As his primary caregiver, Dianne also takes quiet time for herself every morning before Bob wakes up. In her reflections, she says she believes she’s become a better person because of Alzheimer’s. Through their journey together, she has learned patience.

“I just feel good; I’m at peace with me and Bob and everything else, but I do believe that if you’re going to get through it, you just have to do that,” Dianne said. “You do change, and I honestly think you become a better person.”

Dianne has many pearls of wisdom for marriages and relationships, but her favorite ones are forgiveness, love and faith. She would encourage couples to bring out the best in each other, love and forgive one another, and remain hopeful and faithful each day.

“It’s not about you,” Dianne said. “It’s about the other person that has the Alzheimer’s. I would say that’s the biggest takeaway for everyone, and patience.”

Editor’s note: If you or a loved one could be affected by Alzheimer’s disease, connect with the Alzheimer’s Association in Prairie Village. The association’s 24/7 hotline is (800) 272-3900.