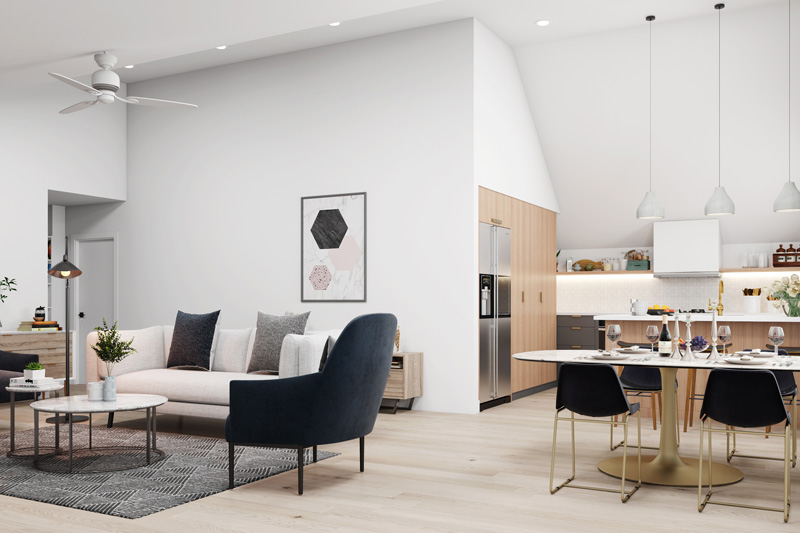 The developer of Blume Shawnee, a new mixed-use project coming to the downtown area along Nieman Road, has finalized interior design plans for the project’s apartment complex.

Russell Pearson with Box Real Estate Development released a handful of images to the Post for our readers to get a sneak peek.

“These provide a good overview of the quality level that these units will be at, which is considerably above what most people have in their mind as an apartment unit,” Pearson said. “These are more similar to what you’d find in a traditional custom home of equivalent size and square footage and amenities.”

Located on about 2 acres in the 6100 block of Nieman Road, on the southeast corner of Roger and Nieman, the roughly $8 million project features residential apartment units with the following items:

The residential project will feature a variety of amenities including a dog skills park, raised garden beds and community garden plots, a courtyard, and a small plaza with a permanent pedestal for rotating public art exhibits.

Pearson said the units will feature design components comparable to new custom homes. You can check out some design photos below:

Blume Shawnee is one of the latest projects in the works in the downtown area, which has seen a noteworthy uptick in revitalization efforts. Pearson’s company is also working on another project: Repurposing the Hartman Hardware building, which it purchased a few months ago.

The city recently completed a years-long infrastructure project along the Nieman Road corridor. Meanwhile, the neighboring Sixty16 Apartments are under construction, and a handful of new businesses have opened, most recently Aztec Theater.

A groundbreaking ceremony for Blume Shawnee is slated for Feb. 25. Team members involved in the development include Cardinal Crest Commercial, Clockwork Architects and McClure Engineering.

“We’re very excited about this,” Pearson added. “The city has been great to work with, and I think this is going to be a welcome project for the area. We’ll bring some really unique opportunities and amenities to the downtown Shawnee market.”

The development is slated for completion in spring 2022.