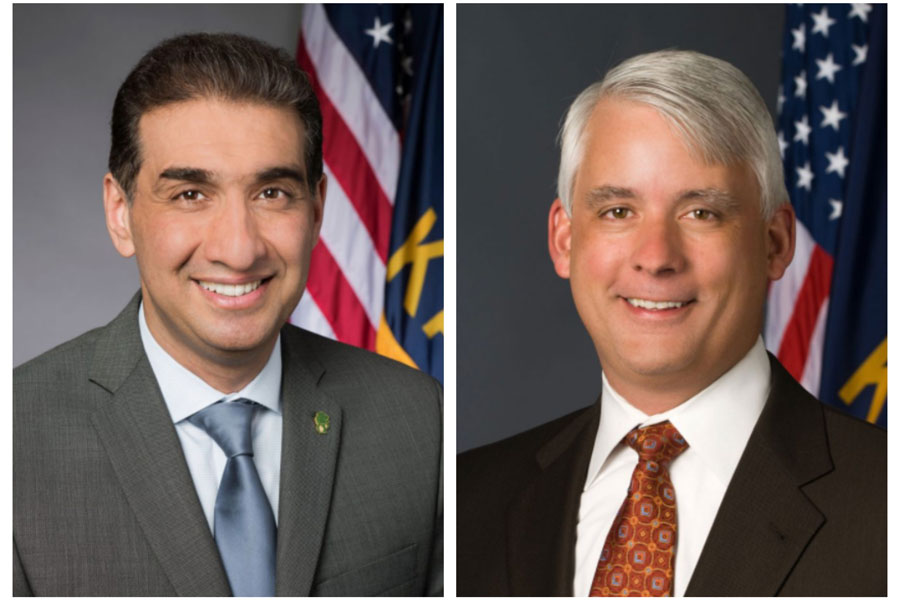 Both Ward 5 Overland Park City Councilmembrer Faris Farassati (left) and council President Curt Skoog have confirmed their intentions to run for mayor in 2021. They aim to succeed Carl Gerlach, who has said he will not seek a fifth term in office. Images courtesy Overland Park city website.

It appears there will be a contested election this fall to determine who will succeed long-serving Overland Park Mayor Carl Gerlach, who announced Tuesday he would not run for reelection.

At least two current city coucilmembers say they intend to run for the job of leading the second-largest city in Kansas. Ward 2 Councilmember and current Council President Curt Skoog confirmed to the Shawnee Mission Post he would like the job. He joins Ward 5 Councilmember Faris Farassati, who announced more than a year ago that he intended to run for the seat and has fashioned himself as a reform candidate.

Skoog said he plans to officially announce his candidacy later this week.

“I think I’m uniquely qualified to help lead the city,” he said Tuesday.

Running for mayor means Skoog will have to give up his spot as a Ward 2 councilmember. His term ends in January 2022. Melissa Cheatham, a Trailwood Elementary parent who is active in local civic issues, has filed as a candidate in that ward.

Skoog and Farassati represent factions of the current city council that have frequently been at odds in recent years, particularly on the subject of tax incentives for developers.

Farassati has often questioned tax increment financing and other incentives at length during meetings, and has been openly critical of Gerlach and the city’s handling of the 2018 police shooting of teenager John Albers.

At times, the friction between Farassati and other members of the council has become openly confrontational.

Some other councilmembers have questioned the fairness of a new Facebook page Farassati created that aims to publicly list how members voted on certain questions. Farassati has said he is doing it for the sake of transparency, but some critics suggest there is not enough explanation or context of the issues given on the page.

On Wednesday, Farassati said his criticisms have never been personal and that he wishes Gerlach the best in retirement. But he wants the city’s attitude toward public financing of development — which he often calls “tax giveaways” — to change.

More money should be invested in city services and infrastructure, and less should go towards big apartment complexes, he said.

“There are no teams here. We are all in the team of the people of Overland Park,” he said.

Skoog said this week that he will focus on keeping Overland Park a premier place to live, building on successes of the past, echoing points made in Gerlach’s own announcement signaling the end of his time in office.

Gerlach said he hopes to use his final 10 months in office getting some priorities accomplished, such as the widening of U.S. Highway 69 and continued redevelopment of downtown.

Gerlach said Tuesday he had not expected to serve in city government as long as he did when he first ran for city council 26 years ago. He served on the council for a decade before winning his first term as mayor in 2005.

But having retired from his job as vice president of marketing for a Lenexa printing studio a couple of years ago, Gerlach said it’s now time to spend more time with his grandkids in town and perhaps travel to see his mother in Florida.

His announcement comes after a challenging year that featured controversies over the city’s severance payment to the police officer who shot and killed teenager John Albers in 2018, along with debates over pandemic pay for first responders.

He did not offer an endorsements for a potential replacement but said he would consider everybody who decides to run.

“I want someone who cares about the entire city and continues to bring jobs into the city,” he said. “Someone who works as a team, not to please their own ego.”