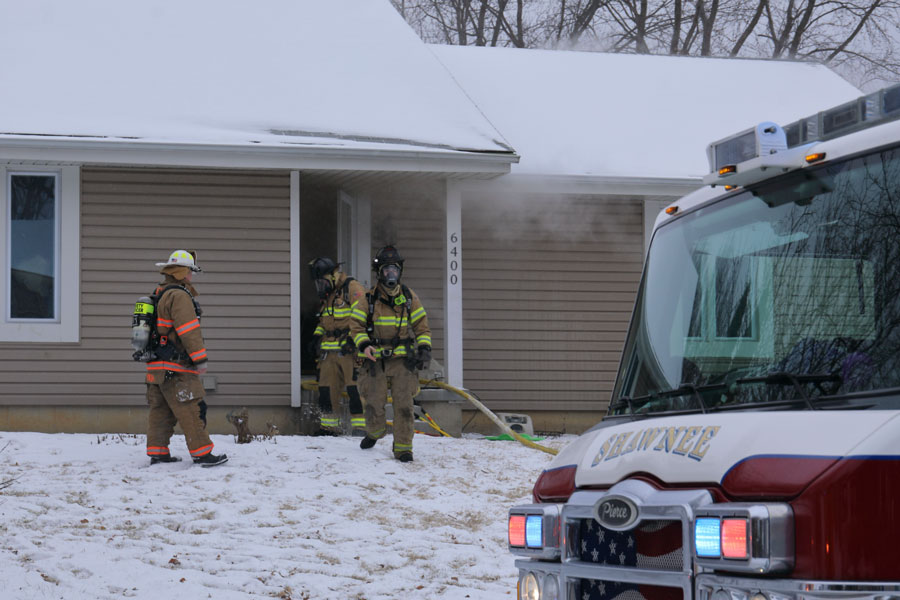 Smoke seeps out from the front door of the house on Charlotte Street as two Shawnee firefighters exit the home. A Lenexa Fire Battalion Chief is also in the front yard, serving as the safety officer on the scene. Photo credit Mike Frizzell.

Three people were transported to an area hospital following a house fire Sunday afternoon in Shawnee.

Firefighters from Shawnee, Lenexa, and Overland Park were called to the home at 6400 Charlotte Street just after 3 p.m.

Shawnee Deputy Fire Chief Corey Sands said a man on oxygen for a breathing condition had taken off his oxygen tube to go into the next room. When he laid down the tubing, he accidentally laid it next to a burning cigarette.

“They then noticed smoke coming out of the room and tried to fight the fire,” Sands said.

Sands said Johnson County Med-Act transported all three people to the University of Kansas Hospital to be treated for smoke inhalation. They include the senior man, his adult son and a teenage grandson.

Sands said a fourth person, the grandmother, was able to escape the home without injuries.

“The man who is on oxygen was in critical condition due to his breathing condition,” Sands said. “The others are in stable condition.”