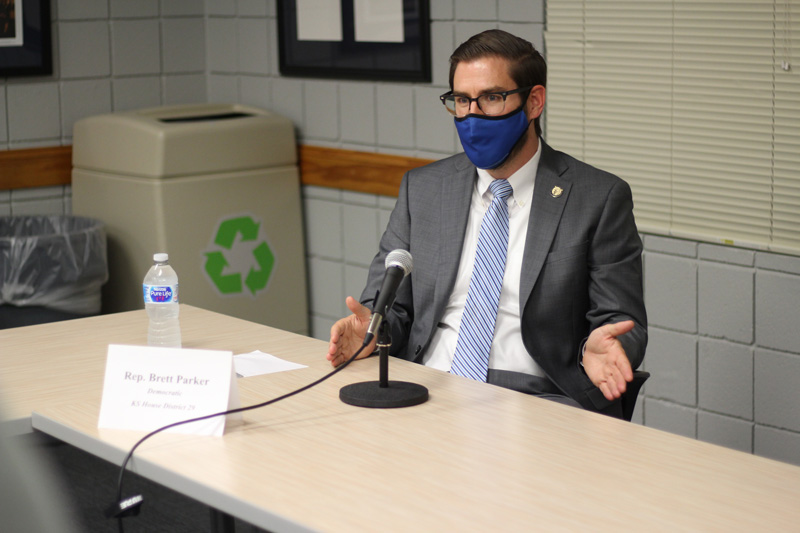 "Having supermajorities means that these GOP leaders can force through unpopular policies over Governor Kelly’s veto with a party line vote," said Democratic Rep. Brett Parker in his Capitol Update column. Above, Parker at the Post's 2020 candidate forum.

Each week, we provide Shawnee Mission area legislators the opportunity to share their thoughts about what’s happening in the state capitol. Rep. Brett Parker, Rep. Cindy Neighbor and Sen. Dinah Sykes are scheduled to send updates this week.

Below is the submission from Democratic Rep. Brett Parker, who represents District 29.

When a bipartisan supermajority overturned the failed Brownback experiment in 2017, an embarrassing chapter Kansas political and economic history came to a close.

Governor Brownback fleeing the state for an obscure Trump administration post months later only reinforced the failure of governing by ideology rather than facts and the need for a return to common sense. The eagerness of so many elected Republicans to distance themselves from the Brownback brand provided a sign of hope for the future. Unfortunately, the actions and rhetoric of GOP leaders in Topeka prove that the lessons of the disastrous Brownback years did not sink in.

In the midst of a global health and economic emergency, the Republican led legislature has prioritized stoking culture wars, restricting the rights of women, diverting funds from public schools, attacking voting rights, and, their all time favorite, unaffordable tax giveaways to giant multinational corporations. It takes a truly impressive amount of gall for these leaders to pretend we didn’t see this very approach fail miserably only a few years ago.

The hard truth is that many of these destructive policies will pass this year or next. Some already have. Having supermajorities means that these GOP leaders can force through unpopular policies over Governor Kelly’s veto with a party line vote.

While those of us who remember the devastation of the Brownback years will speak against this ill advised rush to make Kansas a national embarrassment once more, it will be up to the voters of Kansas to make their voices heard.

If you too have not forgotten what we once had to survive, let your State Representative and State Senator know now and make a plan to hold them accountable in every election.

Kansans must decide if they want the repackaged policies of a failed governor or if they want to learn from those mistakes and chart a better path. You can find your legislators using www.ksleglookup.org.