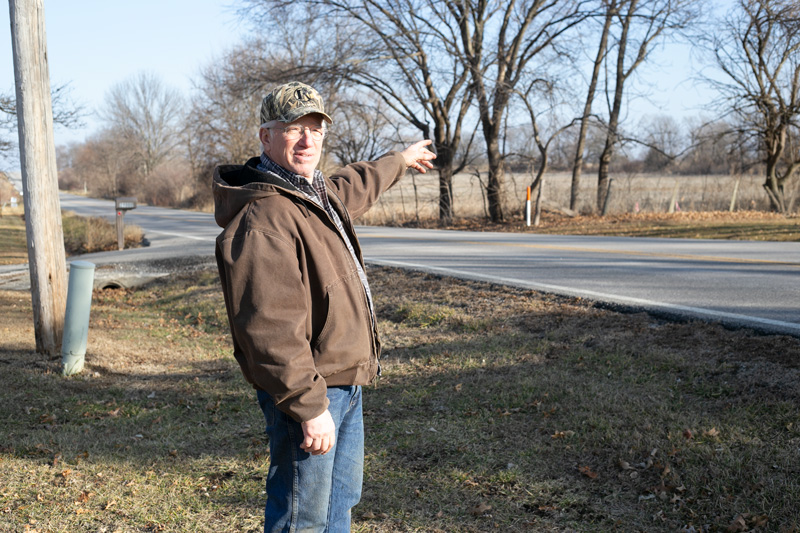 Wayne Davis, a retired truck driver, moved out to rural southern Johnson County from Mission more than 20 years ago to get closer to nature and have more space for his grandchildren to run around. He worries a 636-acre warehouse project across the street from his property (towards where he's pointing in the above picture) would threaten that. Photo credit Leah Wankum.

For Wayne Davis, a truck driver for Associated Wholesale Grocers, the move down Interstate 35 from Mission to rural Edgerton in 1998 was a dream come true.

Only a 30-minute drive from his job in Kansas City, Kan., the house in Edgerton on 14 acres gave Davis and his wife more room to enjoy the country and, eventually, have grandkids visit.

Like many suburbanites who have migrated to the exurban edge of the metro, Davis was enthralled with nature and the open space.

“You could see the lights and stars at night and it was quiet and peaceful,” he said. “It’s not like we’re packed in like we were in Mission. You just feel like you have a little more freedom.”

Now 67, Davis had hoped to pass his retirement on a quiet tract far from the backup beeps and air brakes that had marked his life as a truck driver.

But Davis’ hopes and those of his neighbors may be brought up short because of a developer’s plan to turn more than 600 acres nearby into a massive tract of warehouses that would border their homes.

Davis and some 80 neighbors are now fighting the warehouse plan, which they fear will flatten the rural landscape they treasure while also potentially creating more adverse consequences across Johnson County.

Millions of square feet of warehouse

The transformation of farm land around Edgerton has been well underway since the BNSF intermodal freight facility opened in 2013 just northeast of town.

Existing warehouses are already clustered just north of I-35, along 191st Street and South Gardner Road, including Kubota Tractor Corp. and Amazon facilities.

What rural neighbors like Davis said they didn’t see coming was a massive new plan by NorthPoint Development that would bring more warehouses southward for miles, hopping over I-35 to run mostly down the east side of Gardner Road, going from 199th Street all the way to 215th Street at the Miami County line.

Although the master plan is a rough sketch and not a set of final building specs, neighbors say if the plan comes fully to fruition, it would result in a nightmare of construction and truck traffic and would ruin the natural area for which many of them moved here to far southern Johnson County.

What’s more, they say they have been effectively cut out of the debate over the project because of the procedure NorthPoint used to put the plan in motion.

The neighbors have scrambled together a Facebook page called Warehouse Warriors — Citizens Against NorthPoint and are working on getting a protest petition together.

They got enough of a turnout at the Jan. 12 meeting of the Edgerton Planning Commission on rezoning for the project that an overflow crowd had to be moved to a second building. The meeting ended with planners agreeing to continue their discussion to Feb. 9, with a second look on financial repercussions to nearby homeowners, said Jennifer Williams, who organized the effort.

Officials at NorthPoint, based in Riverside, Mo., have not responded to the Post’s repeated requests for comment by voicemail or email over the past week. But material in the planning documents indicates the company promises berms and landscaping in order to to minimize the impact.

South Gardner Road, currently a two-lane byway with no shoulder, has a mix of just about every kind of residential building, from long-time homesteads to newer upscale homes. In this area smack dab in the middle of the proposed warehouse project, home lot sizes range from 20 acres or less to over a hundred for families who have farmed there for generations.

Some, like Jennifer Williams, are families who wanted to trade their suburban lifestyle for something with a little more connection to the land.

Williams and her husband Brian both grew up in small towns, and eventually found themselves an acre in downtown Overland Park. But they moved to this area outside Edgerton about seven years ago because of a wish to raise their children on more land and to have animals and chickens, which are not allowed in Overland Park without a special permit.

Although they liked their setup in Overland Park, they’ve never looked back, Williams said. They’re still close enough to get the cultural benefits of the city, with open skies to return to.

“You can see for miles, you can see beautiful storms rolling in and the sunset. Really, it’s paradise,” Williams said. “People go on vacation to get the feeling that we get out here.”

Jerot Pearson is developing a residential subdivision called Hidden Prairie made up of three-acre lots in nearby Miami County. He thinks recreation at Hillsdale Lake and the new Big Bull Creek Park, could be a big draw for future residents here. He said he’s also set aside 3o% of his development as an undisturbed conservation area.

There’s a market for families moving to the metro’s furthest outskirts, who want a little more land for their kids to run on, he said.

Pearson concedes that development will continue to happen on Kansas City’s exurban fringe, but like Williams, he thinks NorthPoint’s warehouse expansion is too much.

“That’s just the way progress works. That being said, it’s a shame,” he said. “If they allow it to be zoned industrial it’s just going to ruin the region.”

Some fear the warehouse proposal could pose problems for the broader region, too.

If the area gets rezoned and is built out according to NorthPoint’s master plan, the warehouse acreage will come within ten miles of Hillsdale Lake.

That much new impervious surface — miles of concrete and asphalt — has the potential to affect the lake’s watershed area, which is an important source of drinking water and recreation, said Lesley Rigney, Miami County Conservation District manager.

Although the warehouses will not likely contribute more algae-promoting nutrients into the lake, Rigney said the addition of buildings and parking lots could have a significant impact.

Surface runoff can carry other pollutants, including heavy metals and salts, she said. The faster-running water also could contribute toward erosion and silt.

The area is benefitting from Big Bull Creek Park, a natural area maintained by the Johnson County Parks and Recreation District that filters some runoff, she said. But losing surface area 100 acres at a time as warehouses are built is bound to have an effect.

No numbers on the amount of impervious surface already in the watershed were immediately available, but even paving a quarter of the available land results in heavy impact to a watershed, Rigney said.

In planning documents, the city said NorthPoint will follow the National Pollutant Discharge Elimination System requirements but does not spell out what mitigation would be included.

Kristi Zears, communications director of the Kansas Department of Health and Environment, said the state regulates discharge of pollutants but not the placement of impervious surfaces.

“The potential increase in runoff from Edgerton because of a development expanding the extent of impervious surface would not be something KDHE or EPA would regulate nor prohibit,” she said in an email.

More than anything, neighbors have objected to the process that has brought the development to this point.

NorthPoint used a part of Kansas law that allows “consent annexation” when the land to be annexed shares part of a border with a city. That type of annexation can happen comparatively easily in this case because only one landowner is involved.

Edgerton City Council approved the annexation of the NorthPoint land at a special meeting Dec. 17, 2020. The company had already bought the land in question.

Neighbors, though, said they were blindsided because NorthPoint bought the land under several different names, including Wellsville Farms, Hillsdale Land and Cattle, East Kansas Land and Cattle and South JOCO Farms.

Now they feel they’ve been cut out of the process, Williams said.

The rezoning from a rural residential designation to logistics park is all being handled by the city of Edgerton, but even though their houses will in some cases be right across the street from new warehouses, they are not voting city residents.

Williams said people with smaller acreages are also vulnerable because of the amount they’ve invested in homes and outbuildings that the developer may not want to pay for. Being next to a row of warehouses will make it difficult to find another residential buyer, she said.

“Basically at this point what NorthPoint wants, NorthPoint gets,” she said.

Although NorthPoint did not respond to requests for comment for this story, the company’s web site lays out the positive effect officials believe it will bring to the area.

The development will bring 13,000 jobs to the area in the next 10 to 20 years, according to the website. The company also touts its career training programs and links to the BNSF site and says that locating near the existing industrial hub can reduce the number of truck miles driven and lower a company’s overall carbon emissions.

Edgerton Mayor Donald Roberts declined to comment ahead of any vote on the issue.

Meanwhile, neighbors plan to fight on. In the first week of February, they began putting out signs against the rezoning.

Wayne Davis, who retired out here more than 20 years ago, said he thinks the city has been fair so far in hearing his and other neighbors’ complaints. If nothing else, he hopes their resistance will make the city negotiate harder for landscaping and other measures protecting the neighborhood.

Still, the idea of losing his dream saddens him.

“For the next 20 years I was hoping I could enjoy this place and it just looks like that’s not going to be,” he said. “That’s very disappointing.”