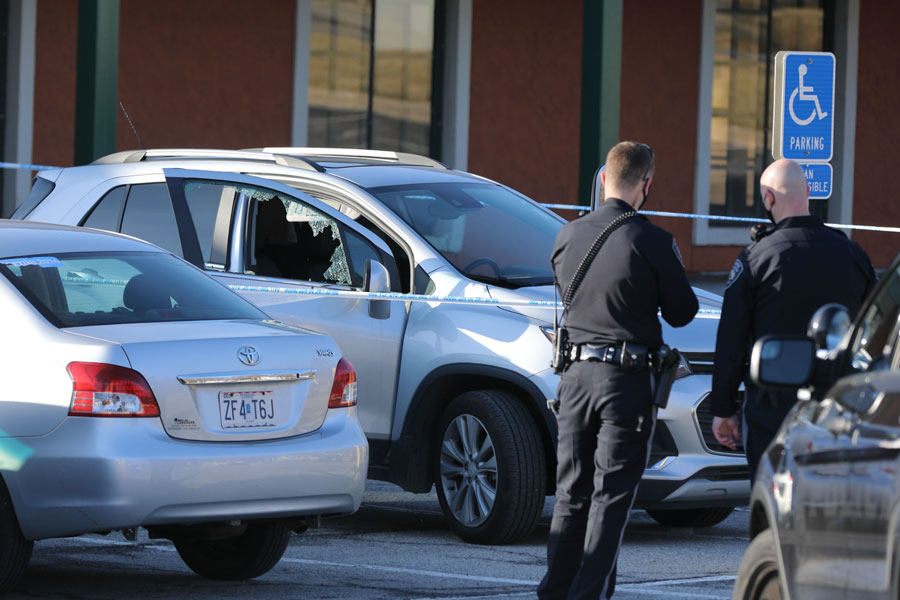 Prairie Village Police responded after reports of gunfire shot from one vehicle to another along State Line Road Tuesday afternoon. Above, the victim's vehicle with its passenger side window shattered, sits in the parking lot of a shopping center in Prairie Village near 76th and State Line. Photo credit Mike Frizzell.

A man suffered a “minor grazing wound” after shots were fired, reportedly from one vehicle to another, along State Line Road near Prairie Village Tuesday afternoon.

Prairie Village police received a 911 call about 3:20 p.m. from a person reporting that their vehicle had been shot at on the Kansas City, Mo., side of the border.

“They heard gunshots and glass breaking. Then they heard tires squealing and observed a vehicle drive away,” KCPD Sgt. Jake Becchina wrote in an email. “One victim sustained a minor grazing wound to his left thigh and refused medical treatment at the scene.”

After shots were fired, the victim’s vehicle drove into the State Line Shopping Center in the 7600 block of State Line Road in Prairie Village to call the police.

Johnson County Med-Act responded at the shopping center. Prairie Village Police confirmed that no one was transported from the scene by ambulance.

The victim’s vehicle could be seen in the parking lot with the passenger side window shattered.