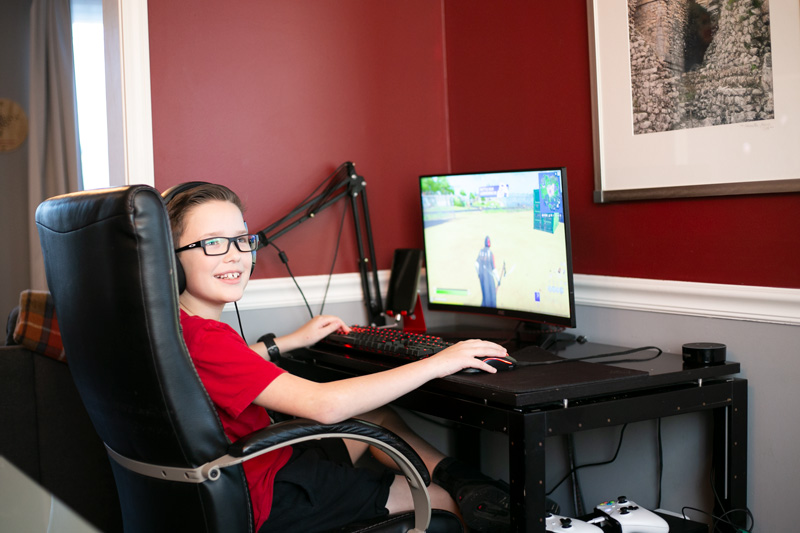 Young gamers like Hudson Whalen stay well connected with their friends despite the pandemic. Through video games — one of Whalen's favorites is Fortnite — gamers can keep in touch and get their mind off things that stress them out. During the pandemic, Shawnee Parks and Recreation partnered with Community Esports League to host tournaments. City staff hope the tournaments bring gamers together to build a sense of community.

The city of Shawnee’s new esports league has given some young gamers a way to stay connected during the pandemic.

With many in-person activities curtailed or brought to a halt completely, parks and recreation departments across Johnson County have had to shift gears. Since last summer, Shawnee city staff has partnered with the Community Esports League to host community esports leagues.

“Esports is something that’s growing; there’s millions of dollars of scholarships for people, and it’s a trending thing in society,” Matt Mann, program coordinator with Shawnee Parks and Recreation. “This has been on the back burner for a while for me, but it really came to the forefront trying to find new and creative ways that we could offer recreational stuff.”

Right now, Shawnee Parks and Recreation is in the middle of the Winter 2021 Community Esports League. All participants play at home to stay safe. Many players are local, but some are also from outside Shawnee.

Mann said he hopes local gamers can use the leagues as an opportunity to connect with one another.

“Once things start to ease up, and we can maybe start having things in person, [we can] actually start to develop an esports culture, esports locally, in-person live events,” Mann said. “It’s also a bonding opportunity for parents and guardians and kids that — man we’ve got nothing else to do and especially now that it’s getting really cold, we can sit around and play. Let’s cheer each other on.”

Gamers were building their own virtual communities long before the COVID-19 pandemic shut down businesses and schools and kept everyone at home. But almost overnight, connecting online became practically the only way to connect safely.

As a result, some young Shawnee gamers say they have thrived despite the pandemic.

Hudson Whalen, a seventh grader at Mill Creek Middle, has been a gamer for years. He enjoys a variety of games, but mostly Minecraft, Fortnite, Rocket League and Call of Duty. A participant in Shawnee’s esports leagues for the past few months, Whalen competes playing Fortnite on a computer he partially built himself.

“It’s fun ‘cause I can just make money off the game,” Whalen said, noting he’s won first or second place in each tournament, earning him cash prizes.

“That’s where his drive is. It takes, what, 30 minutes to do this tournament, and he makes just as much money as mowing yards,” said Jim Whalen, his father. “So he’s so motivated to do well that he focuses on it, he practices and tries to better himself. And he plays outside the league with so many kids in the league. It’s fun for them.”

For two days a week in the league, Whalen plays a few games, then submits his record of how many kills, or eliminations, he gets in a round of Fortnite. Through the league, he’s already connected with a couple of other gamers.

“He’s more relaxed, he’s more himself,” Jim Whalen said of Hudson. “When we see him playing these Fortnite games, or any online gaming, he becomes ultra competitive, and this different side of him comes out. We’ve noticed him really start to think strategically. He takes a leadership-type role, and it’s been really cool to see him come out of his shell, so to speak.”

Outside of video games, Whalen also enjoys soccer and trapshooting. Luckily for him and his friends, they can still connect with each other through video games.

“Even if my friends aren’t here, I can still play with them,” he said. “I can play with them online and talk to them through voice chat. I can just have fun with them without risking COVID.”

Hudson Whalen’s parents, Jim and Tara, have noticed that, despite the limitations on in-person social activities, both he and his little sister, Camille, are doing pretty well, in part because they still see their friends online.

“Whether it be Fortnite or Call of Duty, Minecraft, they’re able to escape what’s going on around here, nothing about it, and be able to talk with their friends and just live life like kids and not worry about the pandemic,” Jim Whalen said.

“You get to talk with them, and you also get to find out all types of games they like,” Catt said of the other players, including some of his friends in the real world.

Tim Catt and his wife, Mary Anne, said they were surprised at how well their son played in the December tournament. He’s already enrolled in the January one.

“The video game machine has been his lifeline to keep connected with his friends since last year, most of the time they weren’t in school together,” Tim Catt said.” They talk more than they play sometimes. It really allowed them to stay connected.”

Registration for February’s league is open through Friday, Jan. 29. Participants can compete for prizes, including cash.