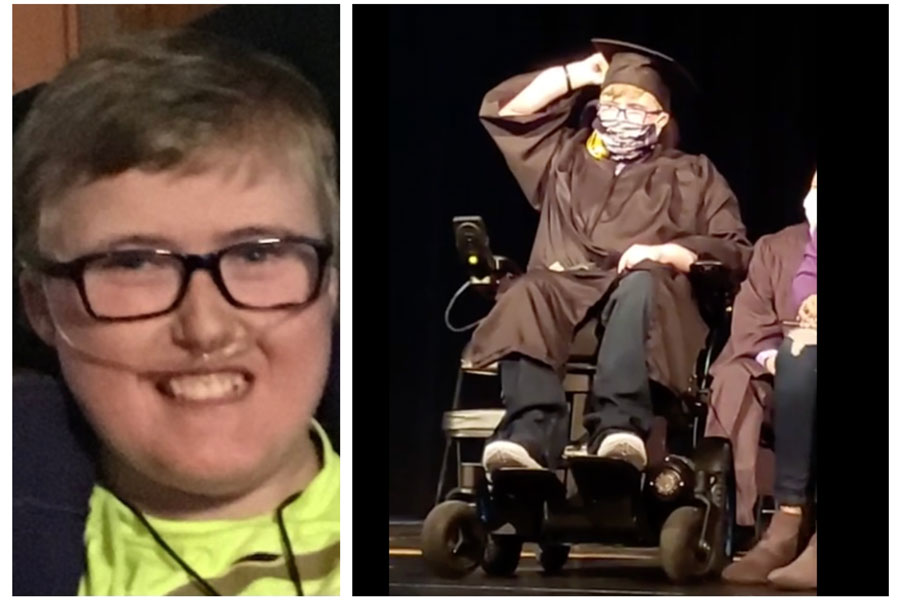 Overland Park's Gunar Reed was born with multiple heart defects and has endured dozens of major medical procedures in his young life, but on Wednesday, he was able to graduate early in a special ceremony at SM West High School. Photos courtesy Shana Reed and Shawnee Mission School District Facebook page.

For Gunar Reed, 17, life has been anything but routine.

The mere thought of an early graduation ceremony Wednesday night for the SM West High School senior had been a “big, big thing” for weeks, according to his mom, Shana Reed of Overland Park.

For Gunar, better known to family and friends as “G-Man,” his late-January graduation — a special circumstance accommodated by SM West administrators — was a big deal.

So far in his young life, he has endured 36 surgeries, including three open-heart procedures. And he’s uncertain about what’s in store for the future.

A special honor from K-State

Gunar was born with four heart defects, and his parents Shana and David knew the youngest of their three kids would be in for some stiff challenges.

“I think the last time we looked at major diagnoses, there were 14 and that’s just the major stuff,” Shana said.

What the Reeds weren’t prepared for was the spirit in which young Gunar has taken it on.

“You talk about somebody that embodies toughness, resiliency, character, integrity, always has a smile on his face,” said Klieman during his Zoom news conference that day. “G-Man’s been through an awful lot.”

Raised in a family crazy about K-State sports, Gunar found himself sharing Facetime calls late last season with Wildcat players like quarterback Skylar Thompson and Taylor Braet, the K-State director of recruiting, on the field before one game’s kickoff.

Except for kindergarten, Gunar Reed has been homebound during the course of his schooling.

The Reed family moved from Salina to the Kansas City area almost 13 years ago to be closer to Children’s Mercy Hospital, where Gunar required frequent medical care.

Through it all Gunar has managed to remain connected with others. His mother says he is a social butterfly who loves making others happy. His attitude, says Shana Reed, has rubbed off on her.

“People are like, ‘How are you so happy, positive and smiling?’ I say because Gunar won’t let me do anything different,” she says.

Another one of Gunar’s passions: the Kansas City Chiefs. He got an opportunity to attend his first game at Arrowhead Stadium during the 2019 preseason. He wore his Patrick Mahomes jersey and was greeted by some Chiefs cheerleaders in the parking lot before the game.

Wednesday’s special ceremony at SM West included not only Gunar receiving his diploma but also an official signing to attend K-State.

Following the moment where Gunar threw his mortarboard into the air, he and his family and the small, masked crowd in attendance watched a video montage of encouraging messages from K-State football players.

“This is a special occasion for a particular young man who’s going through some tough times,” said SM West principal Steve Loe.

“We needed to highlight him when we can. The circumstances called for it.”

The next big thing for Gunar?

He says he plans to watch Super Bowl LV on February 7 from home, with hopes of seeing another Chiefs championship.