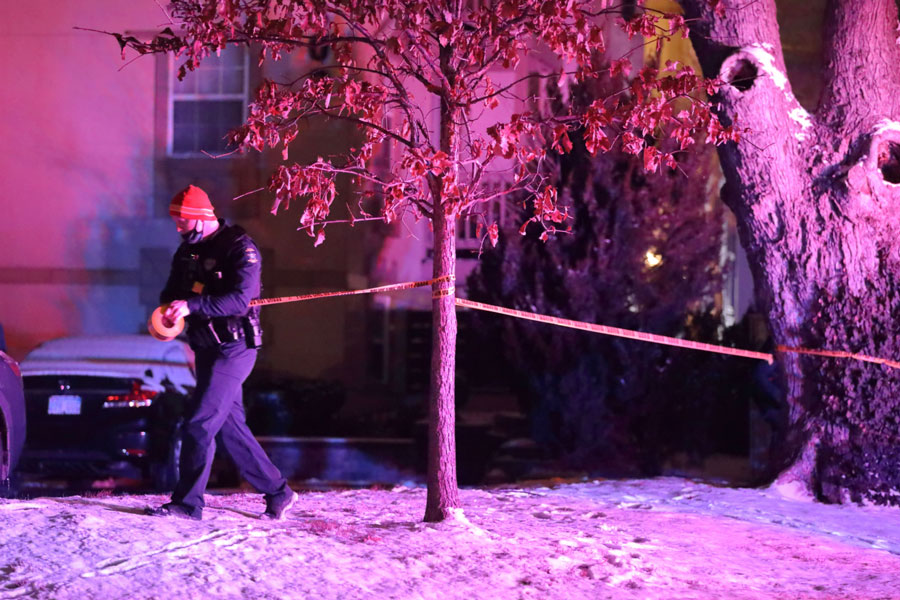 An Overland Park police officer tapes off the east parking lot of the building at 79 Metcalf Apartments after investigators located a blood leading to the parking lot. Photo credit Mike Frizzell.

Police are investigating after a man was shot in a downtown Overland Park apartment complex on Wednesday evening.

Officer John Lacy, the spokesperson for the Overland Park Police Department, says officers were dispatched to the 79 Metcalf Apartment Homes following reports of an armed disturbance.

Recorded radio traffic indicates officers were called to the 7800 block of Marty Street at 7:22 p.m.

“Several citizens advised they heard one gunshot and heard a male screaming, stating “he had been shot,”” Officer Lacy said in an emailed response to questions. “A victim was not located upon arrival, but officers found a blood trail leading to the apartment.”

Shortly after officers arrived at the apartment complex, dispatchers received a call from security at AdventHealth Shawnee Mission in Merriam, who reported a man with a gunshot wound to the leg had been dropped off at the Emergency Room entrance.

“The victim has a non-life-threatening injury,” Officer Lacy said. “At this time, the victim says he does not know who shot him.”

Officers taped off the east parking lot of the building as they searched for evidence Wednesday.

That parking lot was the same parking lot that was taped-off as part of a January 25, 2020 crime scene where a teenager was shot and killed in a breezeway between buildings.