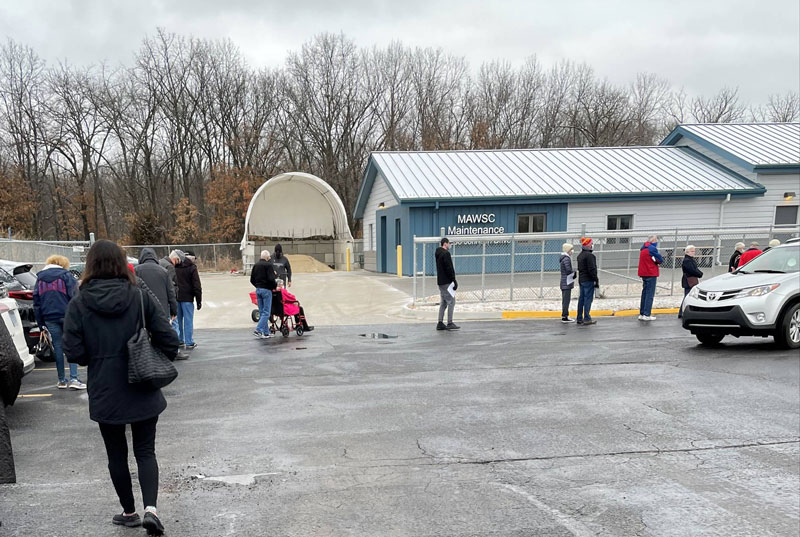 People who showed up on the first day of Phase 2 vaccinations at the county's clinic in Shawnee said they had to wait in the freezing cold for 20 minutes or more and navigate an icy parking lot. Photo courtesy Laura Ovington.

The Johnson County Department of Health and Environment says it is making changes to its COVID-19 mass-vaccination clinic after the first day of distribution Tuesday saw seniors lined up outside in freezing weather as they waited to get shots.

“I, first, want to start by apologizing for the logistics — how it was implemented was not what our county expects or deserves, and it will be different tomorrow [Wednesday] and going forward,” County Manager Penny Postoak Ferguson said in a virtual press conference on Facebook Tuesday night.

“We need to make improvements, and for that, I apologize.”

During Tuesday’s Phase 2 vaccination rollout at Okun Fieldhouse in Shawnee, people who signed up to be vaccinated — nearly all individuals 80 years and older — found themselves waiting outside in the winter weather, shuffling along in line in an icy parking.

Some people who were there say the county’s clinic was set up poorly.

Laura Ovington, who accompanied her 81-year-old mother to the Shawnee clinic told the Post it was like “a complete zoo.”

“These are our most vulnerable citizens” Ovington said. “There was no reason people should have been waiting outside. It was cold, it was icy and nobody was assisting people.”

The goal of the clinic was “to get as many of our residents vaccinated as possible,” county health director Sanmi Areola, Ph.D., said Tuesday evening.

That goal didn’t go completely unrealized — 1,778 people received vaccines on Tuesday — but it didn’t go off without issues, Areola admitted.

Part of the problem, Areola said is that people without appointments showed up to receive the vaccine and others showed up hours before their appointment, but other variables will be corrected going forward.

“We are making adjustments to ensure that that doesn’t happen again,” Areola said.

Starting Wednesday, Areola said people will be allowed to wait in their cars before their appointments to avoid crowding outside in the cold weather.

Wednesday and Thursday are expected to be cold and windy.

Additionally, more health department workers will be stationed outside and inside the facility to guide people and direct traffic, Areola said.

People with appointments will be asked to show up no more than 15 to 20 minutes before their scheduled slot to avoid traffic problems and crowding around. Those who don’t have an appointment should not simply come to the county’s clinic when they want, Areola said, but arrive at their specified date and time.

However, currently there are no open slots available. The county says more than 7,800 people have signed up for open slots this week, the first week of Phase 2 vaccinations. 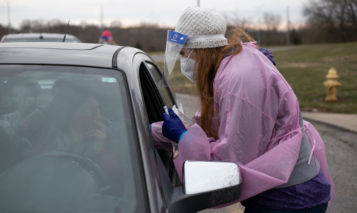