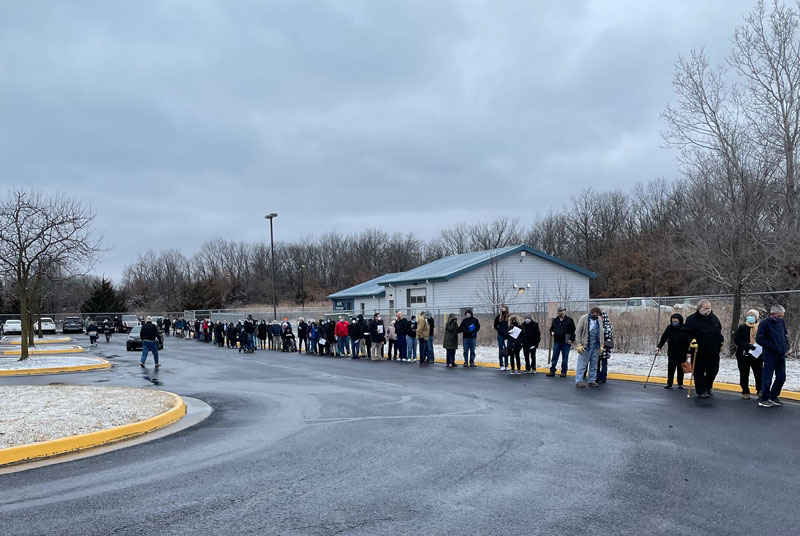 Laura Ovington said she waited outside in freezing temperatures for at least 20 minutes Tuesday with her 81-year-old mother in order to receive a COVID-19 vaccine on the first day of Phase 2 vaccine administration in Johnson County. "My mom is in very good shape," Ovington said. "But if you had problems walking or in a cane, that is a long time wait." Photo courtesy Laura Ovington.

Laura Ovington took her 81-year-old mother to get her COVID-19 vaccine Tuesday and said the scene at Okun Fieldhouse in Shawnee was “a complete zoo.”

Tuesday was the first day the Johnson County Department of Health and Environment offered vaccinations to individuals in Phase 2 of the county’s vaccine rollout plan.

The county announced this week that Phase 2 vaccinations would start with people 80 years and older.

‘They should have been more prepared’

But Ovington said what she and her mother experienced Tuesday morning suggested the county was not totally prepared.

She said they waited outside in freezing weather for about 20 minutes, in the fieldhouse’s icy parking lot, along with other people, most of them elderly. Ovington said some people were there with walkers and canes or in wheelchairs.

“It was icy,” Ovington said. “Nobody, no volunteers, were assisting people.”

Once they finally got inside the fieldhouse, 20200 Johnson Drive, she said the building was nearly empty, with volunteers milling around talking with each other.

“There was no reason people should have been waiting outside,” she said.

Ultimately, she said her mother received her first vaccine dose, saying the EMT who administered the shot was “awesome.”

But she said she hopes the county shores up its procedures after Tuesday. More seniors will be coming Wednesday to get vaccinated as part of Phase 2 and it is expected to be below freezing again.

“They need a lot more help and volunteers. They knew it was going to be icy. They should have been more prepared,” Ovington said.

Courtney Craig, a Roeland Park resident, also emailed Johnson County commissioners her concerns, saying she was worried for her 93-year-old friend who is set to be vaccinated Wednesday.

“When we have an age group of 80+ and leave them in the parking lot with no accommodations for those with low mobility what does that say,” Craig wrote in her email.

“I understand we are in strange times and the uncertainty of planning but are we really doing our best when our most vulnerable to this virus and these weather conditions are being forced to wait out in the cold,” Craig said. “Do better.”

Commissioner Shirley Allenbrand responded to Craig’s email, saying that “staff had been notified.”

“Special thanks for letting us know,” Allenbrand wrote.

Commissioner Becky Fast responded to Craig and said she went to the testing site to see Craig’s concerns in-person. Fast agreed that “Johnson County must do better” and said she had a meeting set up today with Johnson County Department of Health and Environment director Sanmi Areola.

“I found it heartbreaking this morning to see seniors in wheelchairs, in walkers, and in canes on icy pavement and then have to walk a long distance to the building and then stand out in the cold,” Fast said. “You can be assured that I will be strong voice for improvements.”

The Johnson County Department of Health and Environment did not immediately respond to requests for comment Tuesday morning.

This story will be updated with JCDHE’s comments when we receive them.