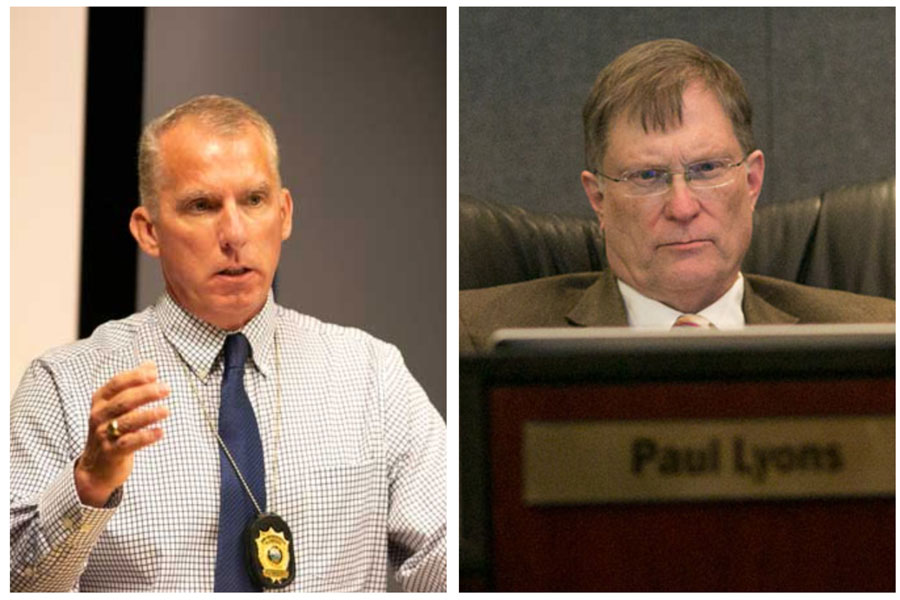 A local NAACP chapter is recognizing two Overland Park leaders for their contributions to racial equity, but some racial justice activists are questioning the choice to honor the pair.

The committee also honored Overland Park Police Chief Frank Donchez as the Diversity Advocate in Law Enforcement for this year.

Henry E. Lyons (no relation to Paul Lyons), the lead member of that local NAACP chapter, noted Donchez’s “activities in law enforcement in promoting equality and justice for all, and protecting the community in times of crisis.”

“History shows, he’s even terminated officers when it’s been found and proved that they are biased in their policing efforts,” Lyons added. “He stood up for righteousness in the law enforcement community.”

Citing their response to “difficult situations” related to escalating tensions over protests last summer, the committee also named Overland Park, Leawood and Prairie Village as recipients of the Diversity Advocate in Government Award.

The committee recognized the recipients as part of the NAACP chapter of Olathe, Overland Park and Leawood’s 17th Annual Martin Luther King, Jr. Legacy and Scholarship Virtual Awards Dinner on Jan. 18. More details are available on the invitation here.

In an interview with the Post, Henry Lyons said the records of both Lyons and Donchez “speak for themselves” in terms of their efforts to make Overland Park a safer, more welcoming and diverse community.

“There were some people who wished to make this a violent situation,” said Lyons, referring to a protest last July in Overland Park that resulted in four arrests. “Through his (Paul Lyons’) efforts, he was able to diffuse that and keep it the way it should be: a peaceful protest.”

Councilmember Lyons, who serves as chair of the Overland Park’s public safety committee, said he was “flattered” to receive the award.

“I couldn’t believe it,” he said. “I’ve tried as best I could to work with a lot of different advocacy groups, and we’ve got some pretty decent people that are interested in what we’re doing in Johnson County and Overland Park, and how we can make the community more welcoming.”

Some civil rights advocates in Johnson County took issue with the recognition of the police chief and city councilmember by the local NAACP.

Patrick Wotruba, founder and chief executive officer of The Miller Dream LLC, an Overland Park-based advocacy group, said he was disappointed and unhappy to see Lyons and Donchez recognized this year.

Wotruba said he believes the two men have done little to help the fight for racial equity and, in some ways, have acted in ways that are counterproductive.

He thinks giving them awards will “encourage their behavior.” Wotruba also said he thinks “it’s all talk” with Overland Park city officials, and no genuine action is happening.

“It was kind of praising them for the way they handled those situations [the protests last summer],” Wotruba said. “That, to me, is not right.”

Wotruba said the Overland Park Police Department has lacked transparency in some high-profile instances, including the fatal police shooting of teen John Albers in 2018. Officers went to the Albers home to do a welfare check on the 17-year-old, after receiving a call from Albers’ friends saying he was in distress and potentially suicidal.

The city later paid Officer Clayton Jenison $70,000 as part of a severance agreement. In September, the FBI announced it had opened a civil rights investigation into Albers’ killing.

Paul Lyons said he appreciates Wotruba’s perspective, and it’s just a matter of finding the right tools to provide solutions. Paul Lyons also pointed out that not all the protests last summer in Overland Park ended up being confrontational. Police, he said, escorted protesters who marched to Mayor Carl Gerlach’s home in August, and Donchez also gave remarks at one of the protests early on.

“I have a lot of respect for Patrick, I respect his perspective on this,” said Paul Lyons. “I tell him all the time, I’m on your side, it’s just a matter of approach.”

On the other hand, Lyons said Overland Park has had a close relationship with the Johnson County NAACP for years working on racial equity.

“Certainly, I understand the passion from everybody, and I understand the reaction of course on some of the terrible situations that happened this summer, from George Floyd to others who were in the news for their treatment by police,” Paul Lyons said. “Our goal was to try to start a communication with them. And I think we’re making some progress to get there, but there’s still a long way to go.”

For instance, one of the next steps for Lyons is to funnel more resources toward crisis intervention and mental health response. For now, the dollars to support some of those efforts are on hold because of a budgetary shortfall caused by the ongoing COVID-19 pandemic. Meanwhile, the city’s new Mental Health Task Force is shaping the city’s response to mental health needs and crisis intervention.

“I think we’ve got a long way to go,” Paul Lyons added. “We’re just getting started.”

Donchez did not immediately return the Post’s request for comment. This story will be updated if he does.

The local NAACP and the Miller Dream both seek to address racial inequities in Johnson County, but the leaders of each organization admit they have different approaches, especially where law enforcement is concerned.

The Miller Dream has made explicit calls to “defund the police” in order to reallocate money that go towards law enforcement to other programs, like mental health response efforts. In contrast, the NAACP of Olathe, Overland Park and Leawood chapter has been more open about its desire to work directly with law enforcement.

Henry Lyons has also taken issue with some of the tactics used by protesters, including The Miller Dream, in local protests over the past year.

“Our success over 112 years has been the fact that we do not condone violence and rioting and disrespecting of others, tearing up neighborhoods, things of that nature,” said Henry Lyons. “We cannot support the way that they operate. It’s contrary to progress. When you ask them what they want, they have no answer.”

Wotruba disagrees. The way he sees it, his group “brings more swagger” and a proactive approach to the racial equity movement in Johnson County. Their primary goal these days, he said, is putting more of a spotlight on mental health resources. His group has frequently met with Paul Lyons to discuss such initiatives.

Wotruba said he believes Donchez is open to exploring ways to relieve his officers from the duty of responding to mental health calls.

“For me, it’s more an issue of putting the money in the right places in terms of public safety, and I think we’re doing that in Overland Park,” Paul Lyons said.