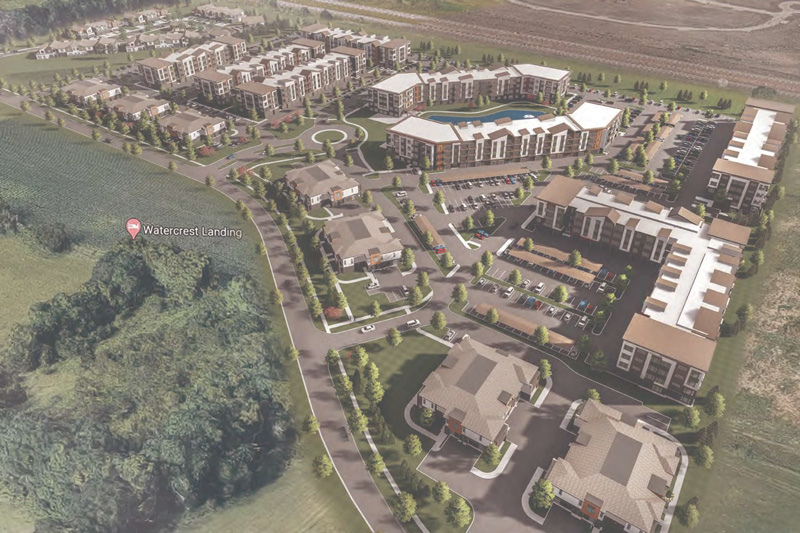 The developers of Watercrest South, a controversial sprawling residential project in western Lenexa, has withdrawn its application for the time being. Q.C. Development, P and L Development LLC and Watercrest South LLC plan to submit new applications for rezoning and site plans at a later date.

The developers of Watercrest South and Copper Creek Apartments, a controversial sprawling residential project in western Lenexa, has withdrawn its application for the time being.

“As previously discussed, we hereby formally withdraw the above-referenced applications, on behalf of the respective owners of the subject properties,” wrote Curtis Holland, an attorney at Polsinelli representing the developers, in a letter to the city dated Jan. 13.

“As mentioned, we intend to submit new applications for rezoning and related site plans for these properties on or before the next filing date of January 25. Please let us know your availability early next week to discuss the new applications.”

Located on 187 acres of farmland at the southwest corner of Monticello Road and 90th Street, the proposed Watercrest South and Copper Creek project consists of a mix of high-rise multi-family apartment and townhomes, single-family homes, and conceptual plans for a multi-family apartment, senior housing and commercial development.

The Copper Creek Apartments — the most contentious piece of the sprawling development plan, which many neighbors opposed due to its high level of density — would be located on the northern end of the site, near a tract of single-family homes already built or under construction in the Watercrest Landing subdivision.

The Lenexa City Council was slated to consider multiple rezoning requests and development plans for Copper Creek Apartments and Townhomes and Watercrest South residential subdivision during the council’s Tuesday meeting.

This project has already been before the city council at least twice for consideration.

In August 2020, the city council considered and remanded the proposal to the planning commission for reconsideration of several items, particularly the apartments’ high density, architectural design and location next to the Watercrest Landing homes.

The planning commission then met in October and again recommended approval of the project after it underwent some revisions.

Later that month, Lenexa city leaders again delayed plans for Watercrest South, citing the same concerns with the higher-density of apartments next to the single-family homes already in the neighborhood.