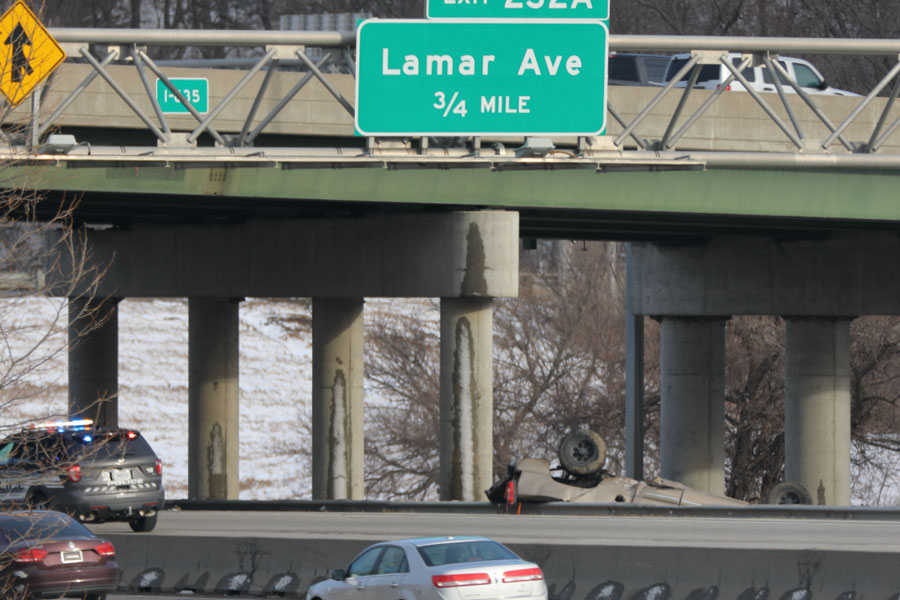 The upturned tires of a car involved in a rollover wreck Saturday can be seen over the guardrails along northbound I-35 near I-635 in Overland Park. A passenger in the car was killed and the driver remains hospitalized in serious condition. Photo credit Mike Frizzell.

A rollover crash along I-35 in Overland Park Saturday left one person dead and another seriously injured.

Overland Park Police say they were called to the scene in the northbound lanes of I-35 at I-635 at about 2:30 p.m. on Saturday.

“Witnesses stated the vehicle swerved off the roadway striking the guardrail and flipping before coming to rest,” Officer John Lacy said in a news release Tuesday. “The driver and passenger were ejected.”

Lacy said the driver was transported to an area hospital with serious injuries; the passenger was pronounced dead at the scene.

Police have identified the deceased as Ronald J. Smith of Sugar Creek, Mo.

Two lanes of northbound I-35 were closed all of Saturday afternoon as officers investigated the crash.