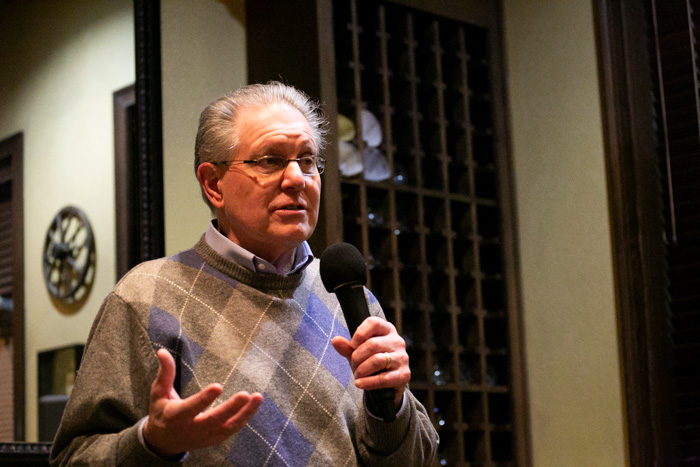 Kansas state Sen. Mike Thompson says he is more assured about the integrity of Kansas’ election system after hearing from Secretary of State Scott Schwab in the first days of the 2021 legislative session in Topeka.

That’s a different message than what Thompson sent in a Facebook post last week in the aftermath of the attack on the U.S. Capitol, carried out by a mob of pro-Trump extremists who tried to disrupt Congress’s certification of President-elect Joe Biden’s victory.

In his post, Thompson, a Republican from Shawnee elected to his first full term in November, condemned the violence of the mob but also cast doubt on the 2020 election, particularly results in other states.

“Like them (the protesters), I was appalled at the lack of concern for fraud and abuse in how the elections were conducted in some states,” Thompson wrote. “I also felt the courts, including the Supreme Court, abdicated their responsibility to uphold the Constitution, and in the process undermined confidence in the integrity of the elections.”

Yesterday’s events in Washington D.C. were very troubling for everyone. I believe most of the people there had no…

Fears ‘allayed’ after talking with Schwab

In the face of no evidence of widespread electoral fraud, dozens of legal challenges to several states’ results were rejected, and Congress ultimately certified Biden’s victory.

Still, Thompson suggested in his post that, given his “concerns” over fraud in other states, he would support and sponsor legislation this session related to election security in Kansas. But he now appears to be backing off that priority.

On Wednesday, Schwab updated Thompson and other Kansas lawmakers on the Transparency and Ethics Committee about methods of ballot collections and counting used in Kansas elections.

“We asked a lot of questions, and I feel much better after talking to him (Schwab), certainly about Kansas,” Thompson said. “I want people in Kansas to be certain that their vote counts, that their voice is being heard, and that’s my big concern. Any fears that I had were allayed today.”

Thompson added that he trusts the results in Kansas, including his own election victory.

He also gave “a guarded yes” when asked whether he accepts Biden’s presidential victory. Three Republican Congressmen from Kansas, along with Republican Sen. Roger Marshall, all voted against certifying some states’ Electoral College results last week.

No election issues in JoCo or Kansas in 2020

Meanwhile, interim Johnson County Election Commissioner Connie Schmidt said the county had no issues this election cycle in following their security procedures and in counting votes.

“We had no major issues with the additional mail-in ballots, except for the need to modify our internal operations to provide additional secure rooms for ballot processing along with the need for additional temporary employees for data-entry of mail ballot applications,” Schmidt said. “But again, these are all internal administrative procedures that had to be modified to manage the large increase in numbers.”

In fact, the primary cause of stress and statewide voter confusion was something out of the hands of election officials: third-party mailers from out of state that encouraged voters to register to vote by mail. The mailers were legitimate but confused many voters. Ultimately, the mailers appeared to have no effect on the integrity of the final vote election.

“We’re going to continue to say the same thing we’ve said the last two years, and the same thing we campaigned on, is we don’t need any drastic change in our election law,” Schwab told the committee. “It’s very diversified. We have enough latitude to adjust to things like a pandemic, but we also have it tight enough that we can verify that our results are in fact true results and you can trust them.”

Here’s a copy of Schwab’s testimony on Kansas elections.

Katie Koupal, a spokesperson for the Kansas Secretary of State’s office, also provided the following statement regarding election security: “The 2020 elections in Kansas went very well. Kansas did not experience any widespread instances of voter fraud, voter suppression or voter intimidation.”

As well as casting doubts on national electoral results in his Facebook post, Thompson also called the attack at the U.S. Capitol “a false flag event to undermine confidence in our system.”

Some right-wing pundits have spread now-debunked reports that militant left-wing protesters, often generically referred to as “Antifa,” started the violence on Jan. 6.

Thompson did not name “Antifa” in his post but said “bad actors” in the crowd were there to “hijack the protest and turn them violent.”

Now, he says he is “undecided” about who truly caused the mayhem at the Capitol, which ultimately led to the deaths of five people, including a Capitol Police officer.

“When I said ‘bad actors,’ it could have been from any bunch, you just never know,” Thompson said. “I cannot condone violence from any faction.”

Thompson stressed that he believes the vast majority of the protesters at the U.S. Capitol were there to peacefully protest, a First Amendment right which he fully supports.

“Some people who wanted to get things stirred up did, and that’s a shame because I think it gives the wrong impression about a lot of those people who were there who really intended to do their civic duty — to show up and show their displeasure — and they certainly have that right,” he added.