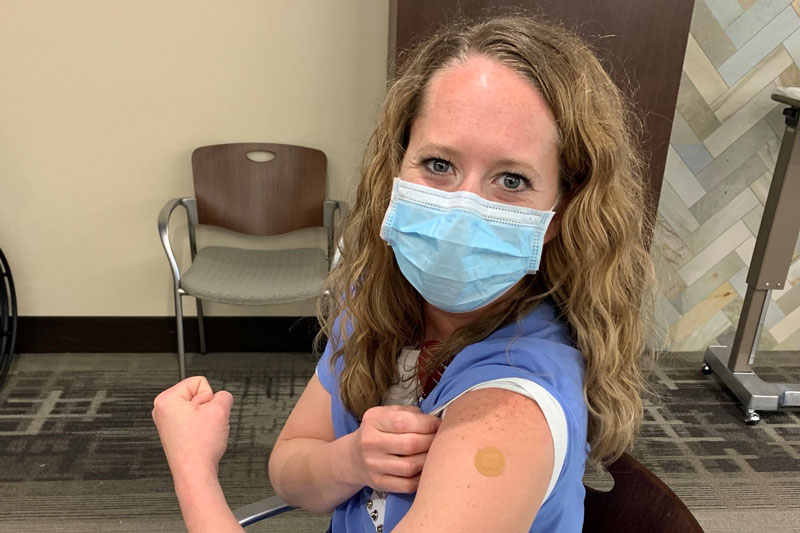 Alice Cline, an AdventHealth Shawnee Mission clinical nursing associate and informational associate, is encouraging the public to "trust science" and get the COVID-19 vaccine. Cline received her first dose three weeks ago, and her second dose on Jan. 7. Photo courtesy of Morgan Shandler.

As someone who works with COVID-19 patients daily in the hospital’s progressive care unit, Cline said she and her colleagues’ chief concern is spreading COVID-19 to their loved ones.

When word of a potential vaccine arriving at AdventHealth first started circulating last year, Cline said she didn’t want to get her hopes up. The number of deaths and the amount of sadness she says the AdventHealth staff have experienced treating COVID-19 patients weighed heavily on her.

But there was a renewed sense of hope when vaccines actually started arriving in December, Cline said.

She didn’t hesitate to get the vaccination, she said, because “anything has to be better” than what the last nine months had to offer.

“I think at this point we’ve been through so much and we have seen so many horrific things that our kind of mentality is, anything has to be better than what we’re dealing with now,” Cline said. “We have a long road ahead of us and this isn’t going away tomorrow, but it’s a good thing to help us push forward with the fight knowing there’s a light at the end of the tunnel.”

There is concern among health care leaders that the general public may be hesitant to get vaccinated.

A new survey of Missourians released by the Missouri Hospital Association, for instance, shows nearly a quarter of adults surveyed in that state say they will “definitely not” get the vaccine when their time comes.

For her part, Cline said she believes in the science behind the the vaccines’ rapid development.

Pfizer and Moderna both say their COVID-19 vaccines are roughly 95% effective, meaning they effectively fend off the disease 95% of the time. (By comparison, some annual flu vaccines in recent years have had efficacy rates of between 40-50%.)

Following state guidelines, Cline was part of the group of front-line health care workers who were the first in the county to receive the vaccine, along with residents and workers in long-term care facilities.

Essential workers and those who are 75 years or older will be in the next round of vaccinations, which is not expected to begin until at least February.

The Johnson County Department of Health and Environment says it has exhausted its initial round of roughly 4,000 vaccine doses and is expecting another round of about 5,900 doses to arrive this week, which will continue to be distributed to health care workers.

The county says there is waiting list of at least 25,000 health care workers who have said they want to get vaccinated.

County health director Sanmi Areola said feedback from those who have received the vaccine so far has been favorable and that people are grateful for the opportunity.

“The vaccine is safe and effective,” Areola said. “It has gone through the necessary steps to ensure it is effective and safe. JCDHE recommends that when the vaccine becomes available, the public should take the vaccine.”

‘We need to come together’

Despite the tragedies the hospital staff has faced, Cline said nurse, doctor and other teams have come together to continue to fight COVID-19. Now, she’s encouraging the public to do the same and get vaccinated when they can to potentially stop the pandemic.

“We need to come together to help take care of this pandemic and stop the spread so we can potentially move on with our lives,” Cline said. “I don’t think normal will ever be normal again, I think it’s more just a plea for the public to — I mean, everybody can make their own decisions — but I feel like we have to trust science.”

The vaccine will likely not become available to most Johnson Countians until spring or summer 2021, according to the current statewide timeline.