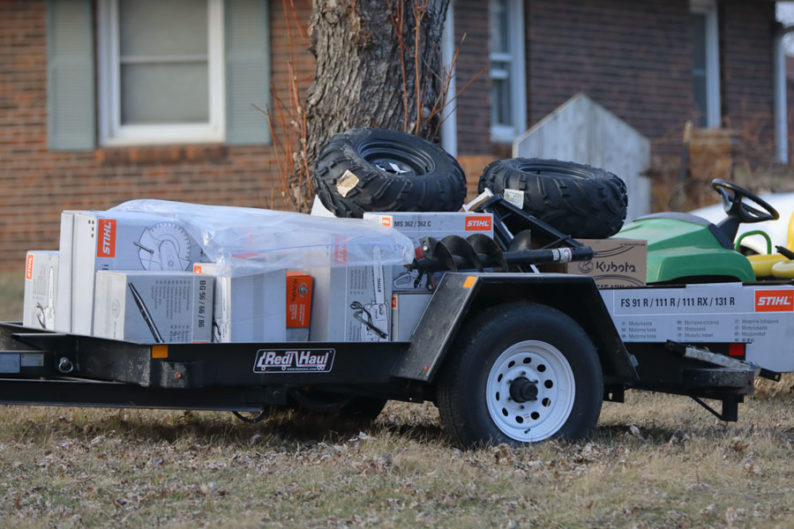 Law enforcement from across the Kansas City metro continue to sort through the large stash of stolen property discovered during a search on Saturday morning at a home in western Shawnee.

Master Police Officer Danny Chavez of the Lenexa Police Department says the investigation includes connected cases from cities across Johnson and Wyandotte Counties in Kansas, as well as in Jackson County, Mo.

Chavez said the warrant served Saturday was part of an “ongoing investigation into illegal narcotics” as well as stolen property.

Over the weekend, Lenexa Police confirmed two people were arrested in connection with Saturday’s search warrant.

On Monday, police identified one of those arrested as Kyle Jeffrey Davey of Shawnee. Court records show Davey is 35 years old and resides at the property where the search warrant was served. County property records list Davey as the property owner.

“Officers and detectives are continuing the work of processing the stolen property,” Officer Chavez said in the release. “Numerous agencies are assisting with the investigation, including the Shawnee Police Department, Johnson County Sheriff’s Office, and Missouri State Highway Patrol.”

Officer Chavez says that after all of the stolen property is cataloged, information of what was recovered will be shared with area police agencies to review open cases in those jurisdictions.

“Estimated value of recovered property will be in the hundreds of thousands of dollars,” Officer Chavez said in an emailed response to questions.

The second man arrested at the address on Saturday morning remains in custody on an unrelated probation violation. He has not been charged in connection with the stolen property.