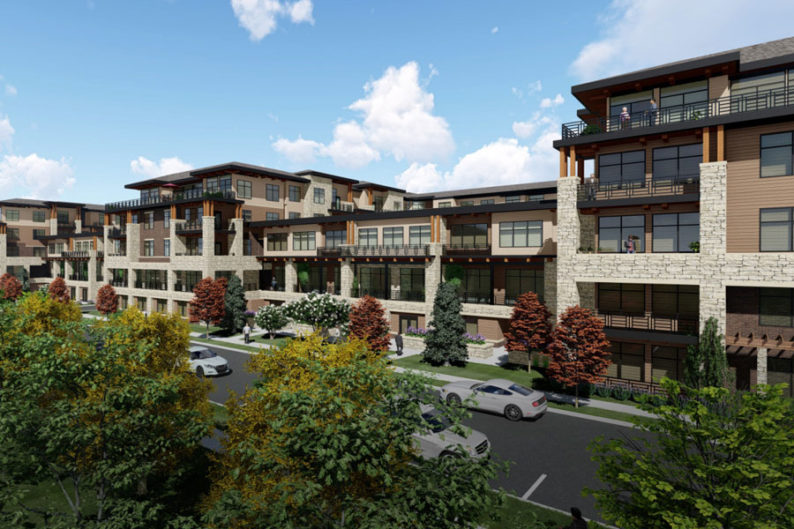 The view of the south facade of the proposed apartment complex at the Ranch Mart South shopping complex, closest to neighboring homes. The project was defeated by the Overland Park City Council Monday night. Image credit Klover Architects.

A $55 million multi-story apartment building intended to complement the Ranch Mart South shopping center in Overland Park went down in defeat Monday night after persistent opposition from its neighbors.

The Overland Park City Council voted 9-2 to deny rezoning for the project that would have put 190 apartment units on the south side of the shopping center, over an existing parking structure. Councilmembers Logan Heley and Jim Kite voted against denial. Councilmember Curt Skoog abstained due to a conflict of interest.

The vote is a major setback for Overland Park-based developer EPC Real Estate Group in its plans to revitalize the 60-year-old shopping area at 95th Street and Mission Road. The developer had proposed to market the apartments to independently living seniors 55 and older as a way to help retailers who have been hard hit by online shopping trends and as a way to serve an underserved housing niche.

Redevelopment plans for the 11.5-acre spot have been on the city radar since the proposal began its journey through the planning department in September. The proposal voted down on Monday was scaled back from the original, which called for 230 units.

‘A mountain of a building’

Residents of the neighborhood immediately to the south of the proposed development have adamantly opposed the project from its outset and organized a protest petition that would have required a 10-vote majority to approve the rezoning.

Homeowners in the neighborhood of mostly one-story houses have opposed the development primarily because of its height and proximity to their houses, which would also be downhill from the multi-story structure.

The original plan would have had a maximum height of 77 feet, but developers dropped that to 61 feet and enlarged some setbacks after meeting with neighborhood leaders. Still, neighbors argued that the windows overlooking their backyards would rob them of their privacy and hurt home values, and they said the transition from apartments to single-family homes was too abrupt.

Councilmembers had hoped the developer and neighbors could come to a compromise agreement. But neighbors told the council Monday that the changes were not enough and the buildings were still too high and too close for the tree-lined buffer zone to make much difference.

“This is a mountain of a building located directly behind our one-story ranch homes,” said Eric Hernandez, who spoke for the neighborhood. “We should not have to sacrifice our quality of life or our privacy for this apartment complex.”

The majority on the council agreed.

Mayor Carl Gerlach said the project would have been a better fit for somewhere in the Vision Metcalf corridor.

“If it was in the Vision Metcalf area, I think it would be a totally different discussion,” he said.

Councilmember Faris Farassati called the project “just a mini-Brookridge, and the pain and suffering that we heard from the people around Brookridge is being duplicated here at a smaller scale.” (Farassati opposed the use of tax incentives for the Brookridge project and announced his intention to run for mayor in 2021 following the vote by the council in late 2019 to approve that project.)

Other councilmembers, like Stacie Gram, said they wished the homeowners would have been more willing to compromise so some form of the plan could go ahead. As it was, the developer’s representatives said they could not cut more out of the plan and still have a financially viable project.

“If people care about the future of our planet, we can’t keep building single-family homes out near Miami County,” he said, noting that denser development shouldn’t only go in poorer neighborhoods.

Councilmember Jim Kite, who voted against denying the project, said the proposal seemed more attractive than the mostly vacant duplexes adjacent to the neighborhood that it would have replaced.

Although the rezoning failed, the council did go on to approve a special use permit for the storage space planned for the basement of the shopping center’s main building.