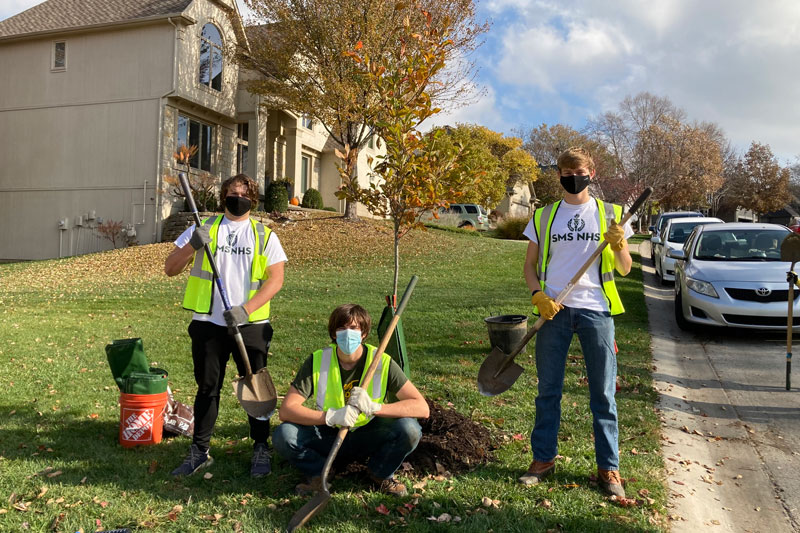 Two Shawnee Mission South seniors, Chase Horner (left) and Harley Witbrod (right), are behind an initiative to plant 215 across Johnson County. The pair have called the initiative SMSD For Trees, and are seeking community tree sponsors to reach their $16,000 goal. Photo courtesy of Harley Witbrod.

Originally intended to have happened on Global Youth Service Day and Earth Day’s 50th anniversary in April 2020, the coronavirus pandemic postponed the initiative.

While a disappointment, that gave Horner and Witbrod a chance to expand their original plan of planting 50 trees throughout Johnson County to a more ambitious goal of planting 215 trees. The got the help of National Honors Society volunteers from SM South, SM East and SM Northwest.

While it seemed like a setback at first, Horner said postponing the event last year was for the best.

“We realized we were totally unprepared last year, and it’s almost like a blessing in disguise that we weren’t able to hold it,” Horner said. “There’s a good chance that it would have failed because we didn’t have the time to plan, and I don’t think we would’ve raised enough money or gotten enough volunteers.”

Not their first project

This isn’t the first time the pair organized a large event.

Back in 2018, Horner and Witbrod raised $4,500 for a drought-stricken school in South Africa. They have also put in a combined total of 150 planning hours into SMSD For Trees since November. That’s included communicating with several cities, the school district, volunteer students and a St. Louis-based tree nursery where they got their trees.

Trees will be planted at various locations throughout Johnson County such as parks in Merriam, Lenexa, Mission Hills, Westwood and Overland Park.

More than 35 SMSD locations will also be receiving trees, including the Center for Academic Achievement at 8200 W. 71st Street.

Horner and Witbrod have asked for $15 fees from each high school volunteer, and have applied to several grants to cover the $16,000 it’ll take to plant the trees. Still, SMSD For Trees is seeking community tree sponsors willing to donate to the cause.

Those interested can email Horner and Witbrod at smsd4trees@gmail.com. Any donations are welcome, but $75 will make the donor an official tree sponsor which includes a certificate of recognition and a preference for where the tree will be planted, Witbrod said.