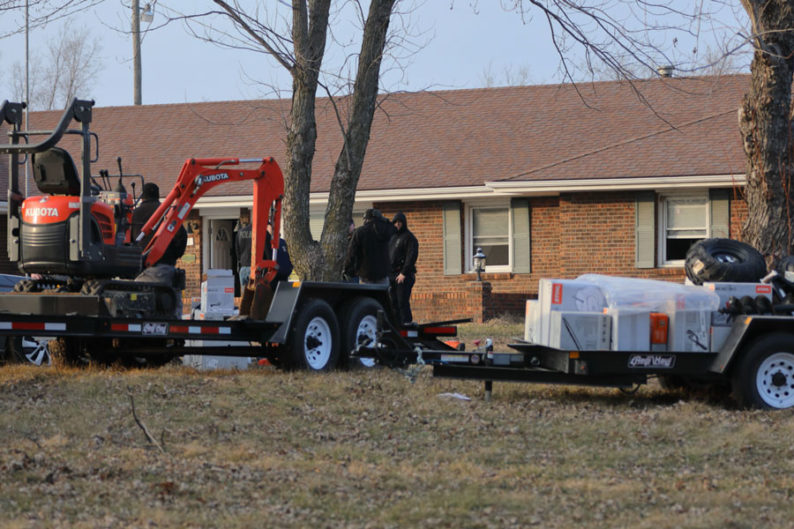 A mini-excavator (on left) and a trailer full of boxed tools were taken from the Shawnee home searched Saturday as part of an ongoing criminal investigation. Photo credit Mike Frizzell.

Police from at least three different local police departments searched a property in western Shawnee after serving a warrant there Saturday morning.

Neighbors say they first noticed police on the property at 20500 West 47th Street before 9 a.m.

Officers from the Shawnee, Lenexa and Bonner Springs police departments could all be seen on the property.

“We served a search warrant this morning related to a large quantity of stolen property at that location,” Master Police Officer Danny Chavez of the Lenexa Police Department said in an emailed response to questions.

Johnson County property records show the property, which includes a house and a large barn on seven-and-a-half acres of land, is appraised at $538,000.

Officers could be seen using a utility vehicle and a pickup truck to remove several trailers from the barn.

One of the trailers was loaded with boxes of Stihl brand tools. Officers also removed at least two UTVs (or utility terrain vehicles), a mini excavator and a mini track loader from the barn.

The Shawnee Fire Department responded to assist officers inside the home starting at about 3:30 p.m.

Firefighters could be seen carrying in a rescue saw and various hand tools. They remained on the scene with the police for about 90 minutes.

Officer Chavez with Lenexa PD said this is part of an ongoing investigation with the Shawnee Police Department.

Booking logs at the Johnson County Jail show the two men who were arrested reside at the 47th Street address, and one is the property owner. Both men are in their mid-30s.

A 50-year-old Shawnee man was also arrested shortly before 3 p.m. at a home near 61st Terrace and Bradshaw Street in Shawnee. Neighbors around the 47th Street address confirmed they have seen him at the western Shawnee property.

That man, who has an extensive criminal history in Johnson County, is being held on a probation violation with a $40,000 bond.