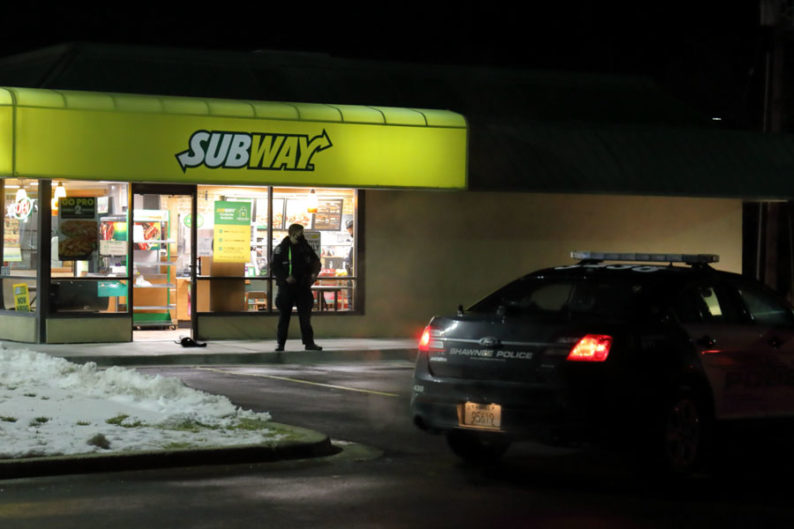 Police investigate an alleged robbery at a Subway shop on Shawnee Mission Parkway in Shawnee Monday night, one of several crimes alleged to have been carried out by three suspects who were later arrested in Kansas City, Mo. Photo credit Mike Frizzell.

Three men were arrested following a string of crimes that started near Oak Park Mall in Overland Park on Monday evening.

Officer John Lacy with the Overland Park Police Department says three men attempted to rob a woman at an ATM near 95th Street and Nieman Road, near the northeast corner of the shopping complex.

“A gun was pointed at the female, and she drove off without the suspects getting anything from her,” Lacy said.

The suspects then approached a male walking through the east parking garage of Nordstrom nearby.

“Another victim was walking in the northeast parking lot and was robbed at gunpoint of several items, including cash and his phone,” Lacy said.

According to recorded radio traffic, both victims returned to their homes before calling police between 7:40 and 7:50 p.m.

Less than a week ago, a woman reported being carjacked at gunpoint in the parking garage just to the south of Nordstrom at Oak Park Mall. One man was later arrested in connection with that incident.

Spree continued into Shawnee and KCMO

Lacy said the suspects went on to allegedly commit robberies in Shawnee and Kansas City, Mo.

Recorded radio traffic from Shawnee indicates the robbery in that city occurred sometime before 9 p.m. at a Subway sandwich shop, 11210 Shawnee Mission Parkway.

Shawnee Police have not released any information about that incident.

She said two victims reported being robbed at gunpoint while walking to their vehicle in the parking garage near 47th and Pennsylvania.

“A dark color vehicle pulled up,” Drake said, “and two male suspects got out. The two suspects pointed guns at them while the driver stayed inside the car.”

Drake said the suspects took two iPhones, a wallet and a purse before leaving the scene in the car.

KCPD officers were then called to another location on the Plaza, this time along Ward Parkway just before 9 p.m.

Drake says more victims reported that they were walking to their vehicle in a parking garage near Rally House when a car approached.

Two male suspects pointed guns at the victims. The suspects left in a dark-colored car with these victims’ iPhone, Samsung Galaxy phone, wallet, credit cards, car keys and a purse.

KCPD was then were called to Casino KC, formerly the Isle of Capri, at 1800 East Front Street at 10:21 p.m. following yet another armed robbery.

Officer Drake says the victims reported walking to their vehicle in the north parking lot when they were approached by two males who pointed guns and demanded their property.

“One of the victims complied, while another victim ran,” Drake said. “One suspect fired multiple shots at the victim. No injuries occurred.”

KCPD officers ultimately spotted a vehicle matching the description from all of these incidents in the area of 46th Street and Paseo.

“Officers attempted to stop the vehicle, the driver did not stop, and a pursuit was initiated,” Drake said. “The pursuit continued to Woodsweather and Liberty, and parties inside the vehicle fled on foot.”

Police have not released any additional information about the three people they arrested.