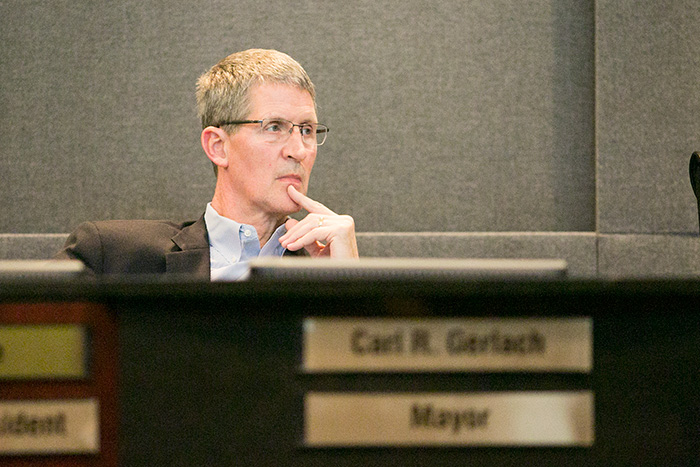 In an August 2020 press conference, Overland Park Mayor Carl Gerlach said the city negotiated a severance agreement with former police officer Clayton Jenison, in part, because they worried he couldn't be fired with cause. File photo.

Remarks made by Overland Park Mayor Carl Gerlach regarding the severance agreement with former police officer Clayton Jenison have prompted a response from a member of the city’s Civil Service Commission.

The commission is a body made up of seven members appointed by the mayor that helps oversee human resources matters in Overland Park’s police department, including reviewing decisions to fire or suspend officers.

In a new letter, commissioner Mindy Manes says Gerlach’s statements about Jenison’s severance could create an “inaccurate impression” of the commission’s integrity. Gerlach’s remarks were made months ago, but the response from Manes was sent to the mayor and dated Dec. 15.

It comes as the city awaits a decision by a Johnson County judge on whether a lawsuit filed by The Kansas City Star newspaper for full disclosure of Jenison’s severance agreement will go forward.

Statements at heart of lawsuit

The Star’s lawsuit concerns the details of an agreement in which the city paid Jenison $70,000 and Jenison left the police force after the shooting death of 17-year-old John Albers in January 2018.

Jenison had been called to Albers’ home to do a welfare check on the teenager, who was battling depression. But the call ended in Albers’ death after Jenison fired repeatedly into the family car as Albers slowly maneuvered it out of the driveway.

In the nearly two years since, Albers’ parents have sought more information from the city, particularly about the severance agreement, which didn’t come to light until last summer.

The lawsuit points to conflicting statements made by city officials about the agreement as a reason for fuller disclosure.

The city has argued that the details of Jenison’s departure are confidential personnel records that are not subject to disclosure under Kansas open records law.

Manes’ December letter was in response to Gerlach’s remarks during a press conference on August 21, 2020, regarding the severance agreement.

At the time, Gerlach said the city negotiated the agreement in order to get Jenison to resign. The city didn’t want Jenison on the force but didn’t have legal cause to fire him outright, he said, and if it did, the Civil Service Commission would likely reinstate him.

“If we didn’t have cause, he could sue us. He could also go before our Civil Service Board and be reinstated,” Gerlach said during the press conference.

But Manes, who was Civil Service Commission chair during the time in question, took issue with Gerlach’s remarks. A reinstatement should not have been a foregone conclusion, she said in her letter.

“Just like in actual court, no one knows ahead of time how an appeal will be decided — not Civil Service Commissioners, not attorneys, not the mayor,” she wrote.

Manes added that one commissioner is a lawyer, plus the commission has its own attorney, and that appeals follow strict guidelines of the commission’s by-laws.

“A more accurate comment which could have been made in the (August 21) press conference would be that the city was concerned that the Civil Service Commission’s hands might be tied by the city having inadequate policies to address incidents such as the officer shooting of John Albers,” the letter said.

The letter gives no indication that it represents the views of the entire commission, although Manes wrote that the subject was discussed at the previous night’s commission meeting.

In a written response, Gerlach disputed Manes’ assertion that there were not appropriate policies in place to deal with the situation.

City policies exist, but Jenison didn’t violate them, according to the police internal investigators, Gerlach said in a letter to Manes dated Dec. 22.

He said he trusted City Manager Bill Ebel’s assessment that there was not cause to fire Jenison, and that he did not intend to portray the commission in a negative light.

But given past experience, Gerlach wrote, “I think logic dictates that if we believe we do not have cause to terminate an employee and we do so, there is a high likelihood that decision will be overturned by either the Commission or by a court.”

Albers’ shooting was a tragedy, Gerlach said, but getting Jenison off the department roster provided a chance to move forward.

“I am saddened you have interpreted my statements as an indictment of the Civil Service Commission,” Gerlach wrote. “That was certainly not my intent.”