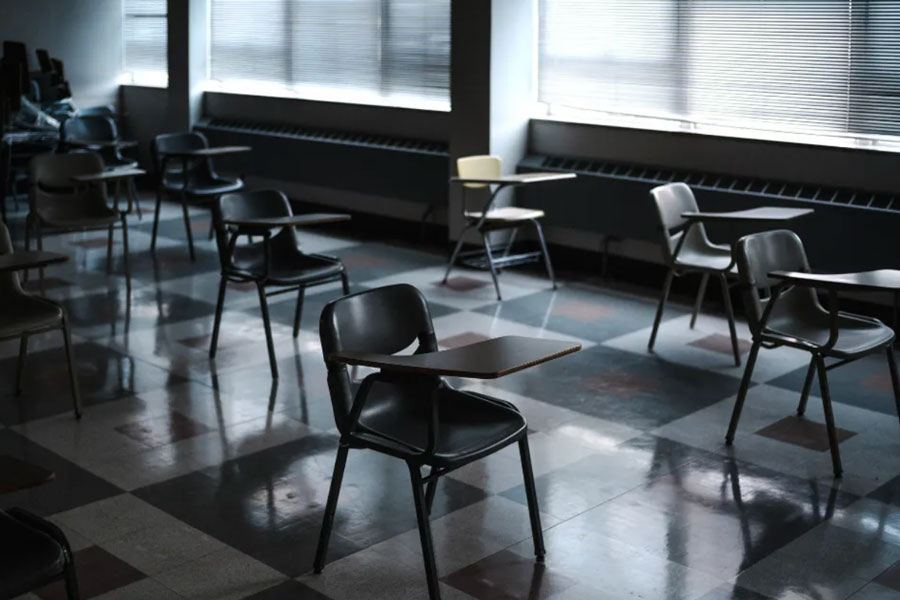 Empty chairs in a classroom at the University of Missouri campus in November. Photo credit Jacob Moscovitch/The Beacon

The pandemic has presented a two-sided coin to the four big public universities in Kansas and Missouri. On one side, the dire enrollment predictions of the summer turned out better — in one case, much better — than expected.

But on the flip side, falling revenues are still a problem administrators will have to deal with for the foreseeable future, due largely to the loss of money coming in from big events, student-facing services and state funding.

Last spring, university officials fresh from the spring break shutdowns were warily predicting major enrollment drops for fall semester. As summer began, most were still assessing whether students would be willing to attend in person in the fall and devising ways to make campus safe if they did.

The University of Kansas and Kansas State University officials said during a May Board of Regents meeting that enrollment could be off as much as 8-10%, perhaps even more. Some national surveys estimated even bigger declines.

“We are pleased that enrollment was stronger than expected,” said Jeff Morris, vice president of communications and marketing at K-State. “Our projections were very conservative going into the fall, as we did not know what to expect from the pandemic.”

K-State reported 20,377 students enrolled, a 4.1% decline from last year, while KU’s was off by about 2.8%, with 23,964 students. KU Chancellor Doug Girod said most of the decrease at that school was due to fewer international students and first-time freshmen.

Still, Girod was upbeat about the enrollment in a message to faculty earlier this fall.

“Given the hardships the pandemic has presented students and families — and the uncertainty it has created in the higher education market — we are pleased to have experienced such a modest enrollment decline,” he said in a message posted on the school website, noting that the college exceeded expectations and outperformed many of its peers.

In Missouri, UMKC counted 16,156 students for an enrollment that was down just 1.5% from this time last year.

Mizzou proved the outlier, with an enrollment that was actually up by 4%, giving it 30,849 students for the fall semester.

MU spokesperson Christian Basi attributed the enrollment increase to the quality of the school’s education and the fact that MU made it a priority to offer in-person and hybrid classes.

About half of the classes there were in person during the fall semester, and 16-20% were some hybrid of in person and online, he said.

“This past spring, parents and students were very clear that they wanted to be back on campus, so we put together a team of more than 130 people who worked on a plan to have as many classes in person or hybrid as possible,” he said.

The outcomes at the four universities reflect the national trend. According to a survey by the National Student Clearinghouse Research Center, enrollment nationwide was down about 3% in October from the same time a year ago, with Midwestern schools faring the worst. Freshmen were by far the biggest reason for the undergraduate decline, accounting for about 69% of that group, the study said. However, the poll didn’t go into reasons for the drop in enrollment.

But even with better-than-expected enrollment numbers, all four area schools face punishing revenue shortfalls that will necessitate budget cuts, furloughs and other cost-cutting measures in the months and possibly years to come.

KU projected a $120 million shortfall that Girod called “unprecedented.” That number may be revised downward to reflect the improved enrollment picture, he said. But even so, the drop in freshmen and international students will have long-lasting consequences.

“When freshmen enrollment falls, that isn’t a one-year tuition hit; rather, we lose tuition we would have received for multiple years,” he wrote in a letter to faculty. A smaller international student enrollment also hurts the school’s bottom line because they pay higher tuition than in-state students.

At K-State, Morris said any revenue drop will also depend on how many classes end up being online and how many students return in the spring — usually a semester with lower enrollment than the fall.

Less tuition money from decreased enrollment is only part of the reason for K-State’s budget problems, Morris said. The school is also taking in less money from revenue-generating events like athletics, which have seen smaller crowds because of the pandemic. The K-State Student Union and McCain Performance Series also have seen less money coming in, he said.

Fewer people on campus also has meant less money from services that rely on student fees like parking, he said, and the school has had to spend more on pandemic-related measures.

Meanwhile, a 2.5% decrease has been projected for all schools in the University of Missouri System, mainly because of a drop in state appropriations, Basi said. There were a number of cuts made by state lawmakers and Gov. Mike Parson last spring. Overall, the MU campus saw $27 million less in state revenue. In response, the school cut 185 jobs through layoffs and unfilled vacancies.

With that bleak picture ahead, all four schools have already started layoffs and other cost-saving measures.

UMKC projected a drop of $10 million to $15 million for the past fiscal year, prompting the elimination of 33 administrative staff positions, not counting unfilled spots due to retirements. There were furloughs and reduced hours for some employees, and cutbacks in major purchases and travel, said Stacy Downs, UMKC spokesperson. The administration made across-the-board salary cuts in the first quarter for employees making more than $50,000 a year, but it has been able to end those, she said.

“The budget and the pandemic are closely connected, so we will continue to monitor and make changes as necessary as the situation evolves,” she said.

Even an enrollment increase does not save MU from some of the same types of actions. Mizzou had a $27.1 million budget hole for the previous fiscal year caused by a loss in state funds, and officials there were told to expect revenue to be down 12.5% for the current year, which began July 1. The school is also attempting to make up for millions in refunds to students when the university went to remote learning last March.

Already, the school has laid off 200 people, furloughed 3,667 and made salary reductions worth $5.6 million on more than 2,000 employees, according to the most recent information available on the school’s website. Reductions also reached the athletics department, which saw salary cuts.

Students at UMKC and Mizzou also saw tuition rise. The 2.3% increase at all four UM System schools was approved in June as a way of generating $14.8 million, although officials said at the time that they would look at other tuition models for future years.

The tuition increase won’t come close to filling the budget shortfall for MU but is meant to cover inflation, Basi said.

Uncertainties abound, and they make budget planning for the next months and years fraught with difficulties, officials said. K-State, like the others, will take a conservative approach, Morris said.

“One thing we remain aware of is that the COVID-19 virus gets a vote as to what happens in the future.” 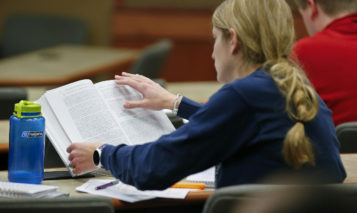 Kansas universities had serious budget problems before coronavirus, now they may have to let more staff go