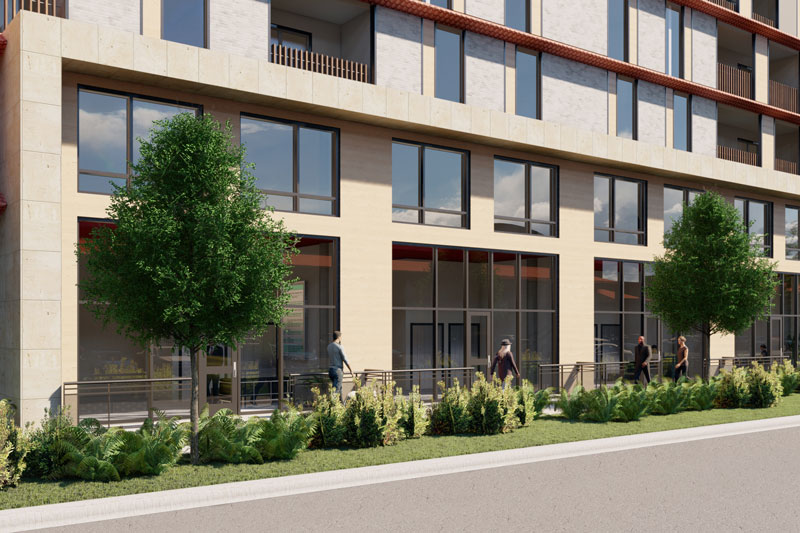 The Mission City Council unanimously approved the Mission Bowl redevelopment project, which will bring a five-story apartment complex to the former bowling alley site. Developers say constituent input about design is leading to some adjustments, including to the color of the building (which will be closer to the above image's color). Image courtesy of Connor Treanor.

Several governing body members expressed their support for the plan, including Councilmember Sollie Flora, who said the affordable housing and sustainability elements are setting a baseline for future city developments.

“I know the Mission Bowl site has been there for a long time, it’s got a lot of sentimental value for a lot of people,” Schlossmacher said. “But again, if we really want to move things forward with the city, if we want to build back better, I think this is a great step in that direction.”

Details of the plan

Following two public hearings — in which no one from the public commented — a slew of items related to the plan were approved, including an ordinance, a resolution and a replat of Mission Mart lots 2, 3 and 4.

Below are the details for the ordinance that accomplished the following, as outlined in city documents:

Additionally, the approved resolution establishes “the intent and authority of the city to issue industrial revenue bonds… to finance the costs of acquiring, constructing and equipping multiple facilities for” the benefit of the project in an amount not to exceed $30 million, according to city documents.

The city is not required in any way to repay the bonds.

The replat of Mission Mart lots 2, 3 and 4 was approved so the developer could purchase one full lot and a portion of a lot from Ridgeview North Associates LLC, the current owner. The city council unanimously approved all items related to the Mission Bowl redevelopment plan, which is projected to be completed by August 2023.