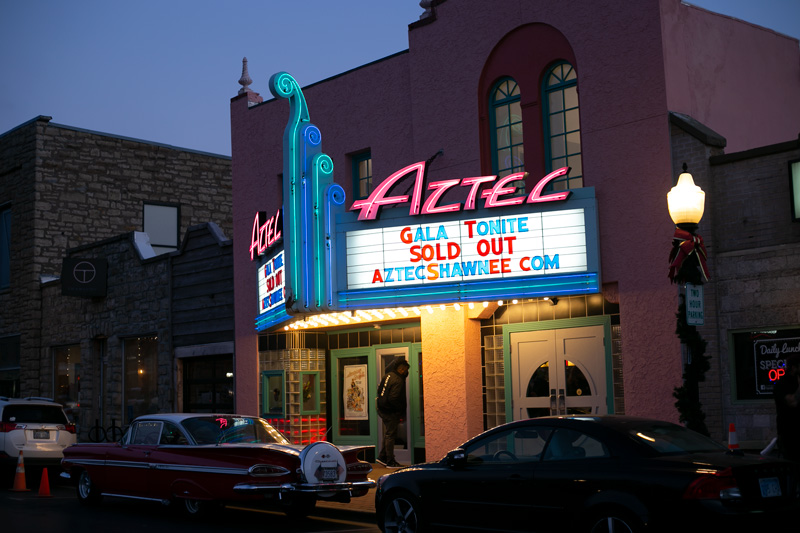 Located at 11119 Johnson Drive, the historic theater closed in 1974. It recently reopened after being restored by three Shawnee natives — brothers Jeff Calkins and Chris Calkins and Bruce Young.

Located at 11119 Johnson Drive, the historic theater closed in 1974. Since then, three Shawnee natives and business owners — brothers Jeff Calkins and Chris Calkins of Calkins Electric and Bruce Young of Young’s Flooring — took over the project to restore the building.

“Being able to open it and give it back to the community, it’s a big step,” said Jeff Calkins. “Lots of people tried before and weren’t able to finish it, and I’m glad we were able to do it.”

The gala on Sunday evening sought to raise $50,000 for a projector and screen. The owners expected to get pretty close to their goal, but they don’t yet have an official tally.

The theater seats roughly 200 guests, although that number will be drastically reduced while the theater rides out the COVID-19 pandemic.

Several neighboring businesses contributed to the gala, practically too many to count, said Jeff Calkins. And the Sabatino Foundation made it so that every dollar from the gala will go straight to the projector and screen.

“It tells you that people want to be involved; they know that this type of project is really needed, something to bring the crowds and go everyplace else,” he said.

A bit of history

The theater first opened in September 1927 as The Mission Theater, playing silent films and talkies later on. Constructed by Boller Brothers, the theater was designed to look like a Spanish mission.

Sometimes in the 1940s — the exact timeframe is uncertain — Glen Wood Dickinson took over ownership of the theater. Dickinson Theaters operated it as the Aztec Theater until the 1970s. When it closed in 1974, the Pflumm family purchased it and the name was changed to the Fine Arts Theater.

It has undergone a few renovations, most recently by Wade Williams in the early 2000s. At one point, the building was used for storage for the nearby Shawnee State Bank.

“At the time, we thought, what have we got ourselves into,” said Chris Calkins.

The new owners purchased the theater from Williams in October 2017. Bob Curry, who retired from BC Engineers Inc., spearheaded engineering for the project, and Bratton Bro. Contracting oversaw construction.

They gutted everything: rewired electrical work, opened up the ceiling, replaced the roof, restored the furnishings and added vintage-style embellishments such as sconces along the walls, four chandeliers and a vintage interior design in the lobby and restrooms. Everything is energy-efficient and LED.

Crews had to start over completely due to requirements to get the building up to code. Major construction started in July 2019. And it took 19 days to install the fabric curtains on the walls.

What kept them going was their vision to bring the community together, a vision inspired by a picture from 1964, which shows the sunset glowing over downtown Shawnee.

“The thing that I focused in on after a while was there wasn’t an empty parking space; there was a car in every slot, and there were people everywhere,” said Jeff Calkins.

The city supported the Aztec with $250,000 of funds; the owners didn’t say how much they’ve invested so far, but the building is now worth millions, thanks to the combined efforts of the owners, donors and the city.

Some parts of the theater are original to the building, while others are antique parts from other theaters:

‘This place used to be full’

Young recalls his first movie-going experiences at the Aztec in 1953. He remembers seeing “The Tingler,” “House on Haunted Hill,” Western films and Jerry Lewis movies. He hopes to show movies to the community that they enjoyed watching in their younger days.

“This place used to be full on the weekends, so I think it got used a lot,” Young said. “This is where you went.”

The first movie is slated to debut in January. The owners haven’t decided which one to play first, but Chris Calkins is lobbying for “American Graffiti.”