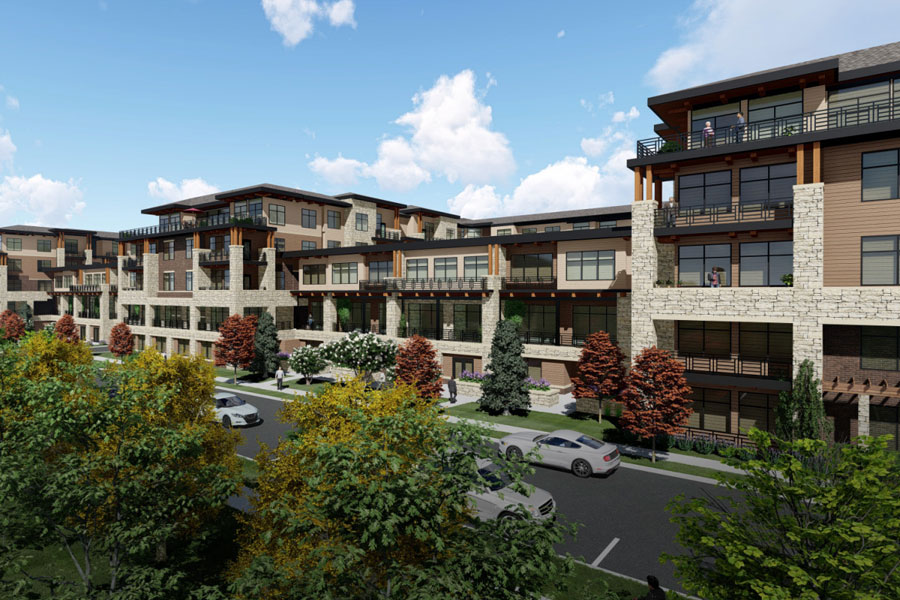 The view of the south facade of a new proposed apartment complex, closest to neighboring homes. Image credit Klover Architects.

A scaled-back version of an apartment complex directly south of the Ranch Mart South shopping center near 95th and Mission was once again approved by the Overland Park Planning Commission Monday night.

The controversial project now heads back to the full city council on Jan. 11.

The revised plan — which, among other things, lowers the overall height of the proposed complex by about 15 feet — passed the commission by a 7-3 voice vote, a wider margin than when the commission okayed the original plan in September by a 6-5 vote. Individual votes were not announced at Monday’s meeting.

Lawyer Bob Johnson, representing the developer, said the revamped version addressed the concerns of the city council when the council sent the matter back to planning commission for a second look at the project’s height and a buffering distance between it and the neighborhood of low-slung single-family homes down a hill just to the south.

The original proposal called for seven stories of apartments for independently living seniors to be built over an existing parking garage. That plan called for the removal of a block of duplexes adjacent to the mostly single-story homes nearby. But the neighbors opposed it, saying the buildings maximum 77 feet was too tall to be so close to them.

The newest plan dropped the maximum height to about 62 feet by removing the top floor and adjusting the height of the other floors. It also put more green space on the neighbors’ side of the street separating them from the development and increased setbacks on the ends of the building.

Johnson, the developer’s lawyer, said those changes were arrived at after a series of three meetings with neighbors.

But three neighborhood representatives who spoke to the commission Monday said the changes are not enough to get them to drop their opposition, which includes a protest petition.

Neighbors Tony Medina and Jason Balk said the homes near the “west wing” of the project will still be only 50 feet away from a three-story apartment block, even with the additional 10 feet of space the developer drew in.

They also said the circulating drive that separates the neighborhood from the project should be kept as is because it keeps the project’s footprint smaller. Neighbor Eric Hernandez said he has trouble believing that the renderings of a border fence with thick trees — which were presented Monday night — would really block much of the view of the apartments from his back yard.

Commissioners differed on whether the changes to the project were significant.

Commissioner Mike Flanagan said the trees and border fence will be an effective shield. “I would love to have it down one lower (level) but at some point you have to look at the viability of the project as a whole,” he said.

Commissioner Tom Robinett said the project would complement the shopping center and neighborhood.

“It’s good infill that fits the way development is going today,” Robinett said. “Things change over 40, years and we just need to accept that.”

Commissioner Steve Troester said Overland Park has been changing from the bedroom community it was in the 1950s and ‘60s.

“We’re reinventing our city and although change is difficult I think these are the ways that we will continue to grow and make our city a better community overall,” he said.

But Commissioner Rob Krewson said that although he likes the changes to the project and worries about the alternative if it fails, “It’s still too much too close,” he said.

“There are simply not enough acres on the site to try to fit it in here.”