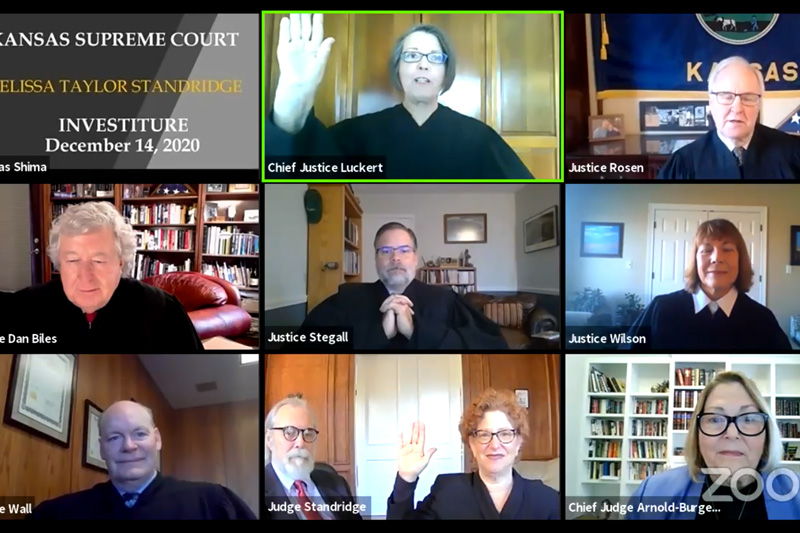 Melissa Taylor Standridge, a Leawood judge, was sworn in as a justice of the Kansas Supreme Court on Monday morning. Standridge is in the middle on the bottom row. Image via YouTube.

Melissa Taylor Standridge, a Leawood judge, was sworn in as a justice of the Kansas Supreme Court on Monday morning.

Chief Justice Marla Luckert presided over the ceremony, which took place by video conference and was broadcast live on YouTube due to the health and safety risks of mass gatherings during the COVID-19 pandemic.

“Today is not only a special day for the court and Judge Standridge, her husband Richard and their family, but for all Kansans,” Luckert said. “It is a special and historic day for the administration of justice in Kansas.”

Gov. Laura Kelly appointed Standridge to fill the vacancy created by Justice Carol Beier’s retirement Sept. 18. Standridge is the 79th Kansas lawyer to take this oath and the sixth woman in Kansas history to hold this office. She was one of three nominees who were all women — a first in Kansas history.

“That accomplishment is even more amazing when you realize that this year is the 100th anniversary of women having their inherent right to vote as citizens of this country recognized by the 19th Amendment to the United States Constitution,” said Karen Arnold-Burger, chief judge of the Kansas Court of Appeals.

‘Her story is the American story’

A lifelong Kansan and foster and adoptive parent, Standridge is a great-granddaughter of Jewish immigrants from Russia.

“Her story is the American story, and she comes to her role with those shared values and life experiences,” Arnold-Burger said. “She has a heart as big as this state and a commitment in her personal life to help those among us who lack power and influence.”

At the conclusion of the swearing-in ceremony, Standridge joined her fellow justices in hearing cases on the court’s Dec. 14–18 docket.

“I wanted to make the world a better place by protecting clients and safeguarding the rule of law,” Standridge said.

“Judicial independence means the judiciary should be independent from private or partisan interests and remain committed to the rule of law and the protection of individual rights and liberties,” Standridge said. “The judicial branch provides everyday Kansans a system in which they can resolve disputes, protect their individual rights, and benefit from checks and balances on the other branches of government.”

Standridge has received numerous awards during her career, including:

Below is the video of Standridge’s swearing-in ceremony.