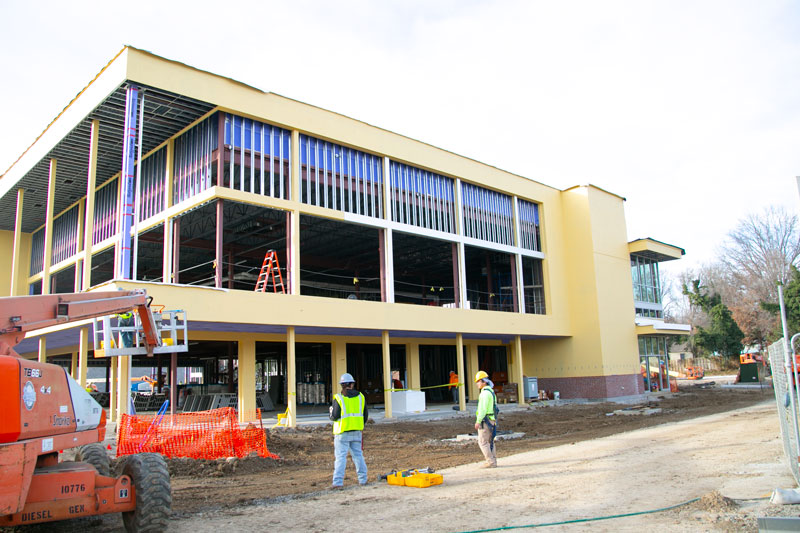 The Ranch Mart North redevelopment is working toward an early summer 2021 completion. The project features a two-story restaurant and office building (above), facade renovations throughout the shopping center and a new restaurant from Kansas City's Char Bar owners.

Ranch Mart North developers say they are making significant headway on modernizing the 60-year old Leawood shopping center — and are projecting a summer of 2021 completion.

The $47 million redevelopment project includes a two-story, multi-use building with first-floor restaurant space and second-floor office space. The development also puts pedestrian and outdoor spaces at the forefront of its plan.

For that reason, Trip Ross with Cadence Commercial Real Estate says the new Ranch Mart North could be unique to the Kansas City metro. As someone who frequented the shopping center as a child and grew up nearby, Ross said the redevelopment is one that means a lot to him personally.

Ranch Mart North’s redevelopment was planned before the pandemic, so its abundance of outdoor spaces are not a response to the crisis, but Ross said they will now be critical. Most notable, he said, is the lawn space located at the back of the development between the new two-story building and Cosentino’s Price Chopper, which will feature a lawn, a custom mural, swings, a ping pong table and outdoor seating.

Meat Mitch, created by the owners of Kansas City’s Char Bar, will be the anchor restaurant next door to Cosentino’s. The restaurant will have nearly as much outdoor patio space as it will an indoor dining room, Ross said.

There are no confirmed tenants for the building’s other office or restaurant spaces yet, though each space could hold up to two or four tenants respectively.

Other new features for the site include multiple pedestrian pathways such as one leading to the backside outdoor space, and updated lighting and parking lots.

“The hope is this is like nothing else in Kansas City,” Ross said. “It’s a neighborhood shopping center, and there’s an expectation there that it’s going to be just the usual dry cleaner and grocery store and hair cutter and some restaurants. We’re trying to go way outside the box with this.”