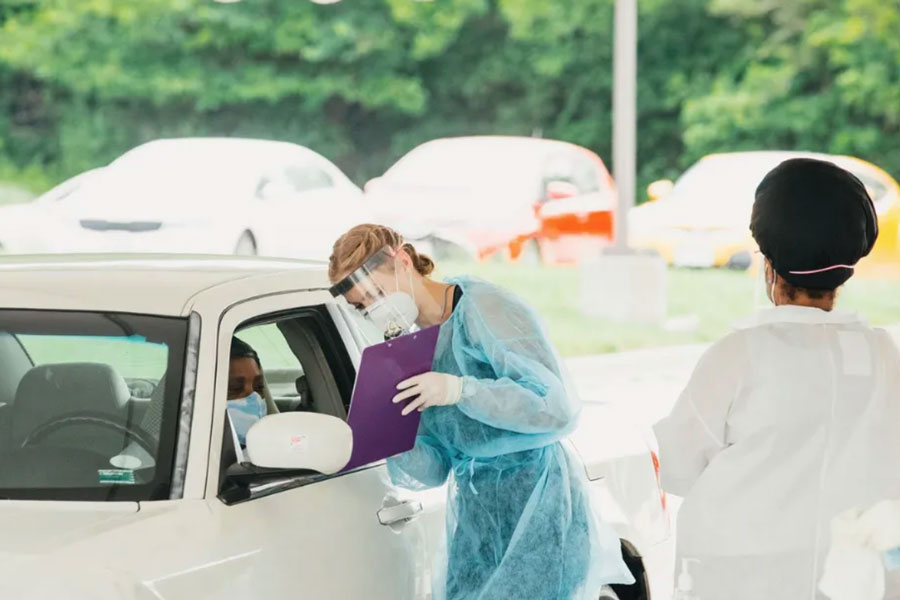 With rapidly rising COVID-19 cases and a shortage of staffed hospital beds, most of the Kansas City metro is tightening COVID-19 restrictions.

But while most area counties are working in coordination like they did earlier in the pandemic, county commissioners in Johnson County, Kansas, have imposed laxer gathering limits and gym restrictions than the rest of the metro.

“State lines, county lines and city lines are nothing more than street names. It takes leadership and all of us — our entire region  — to slow the spread,” said Kansas City, Missouri Mayor Quinton Lucas to The Beacon through a spokesperson.

Lucas has expressed his frustration with the lack of consistency in rules across the metro, thanking Platte County for joining “our metro-wide (except Johnson County, KS) COVID-19 mitigation orders,” and then tweeting that full bars in Johnson County could present a metro challenge.

Johnson County Commission Chairman Ed Eilert told The Beacon that at this point, there are no plans to increase any COVID-19 restrictions in Johnson County despite inconsistency with other local governments.

“If you are in a group, whether it is 10 or less, 50 or less, or more than 50, you need to practice masking, social distancing, protect others and protect yourself,” Eilert said.

While the other counties require gatherings of 10 people or fewer, Johnson County’s gathering limit is a maximum of 50 people. Currently in Johnson County, within a group of 50 people, there is an 82% chance that at least one person in the group will have COVID-19, according to The COVID-19 Event Risk Assessment Tool created by researchers from the Georgia Institute of Technology, the Applied Bioinformatics Laboratory and Stanford University. In a group of 10 people, that risk level drops to 31%.

They also have reduced the maximum restaurant and bar capacity to 50%, and limited groups of patrons to 10 people or fewer (with some counties having a max of eight).

“I think anytime you are congregating inside, especially when you are doing things like eating or drinking inside, you are taking a risk,” said Marc Larsen, emergency physician and director of operations for Saint Luke’s COVID response team.

Because people aren’t wearing masks while eating or drinking, they put themselves at greater risk when someone may cough or sneeze around them, Larsen said. Reducing the capacity of restaurants and bars reduces the risk of catching COVID-19 simply because there are fewer  people around you that could pass on the virus, he said.

But Johnson County chose to push closing time for indoor restaurants and bars to midnight. Larsen said earlier closures help prevent people from getting overly intoxicated, at which point they may stop following mask wearing and social distancing rules. He added that earlier closing times at bars mainly target people in their 20s and 30s who have had the highest COVID-19 positivity rate and have been spreading the virus to family members.

Mike Day, who owns McGuire’s Tavern in Overland Park, which is located in Johnson County, KS, says that he used to do substantial business after midnight.

“It is not very logical, the criteria they are using,” Day said. “The pandemic is horrible, for my business we’re on a slippery slope.”

He hasn’t had to turn anyone away yet due to the capacity restriction, although capacity is a factor for a lot of other businesses.

“We have to get a grip on the growing number (of COVID-19 cases), but we need to stay open.” Day said. “I would like the government to give me more stimulus money.”

‘Do some push-ups and sit-ups in your basement’

While the other counties require masks inside gyms and have reduced the maximum occupancy in gyms to 50%, the only new restriction Johnson County has imposed on gyms is that locker rooms should be closed. In Johnson County, athletes also aren’t required to wear a mask if they are able to maintain 6 feet of distance from each other.

Larsen said fitness and exercising indoors poses a risk for spreading COVID-19, particularly because people breathe more deeply and rapidly while working out.

“That 6 foot general rule we apply to when people are talking normally probably needs to be extended to 10, 15, or maybe even 20 feet out depending on how aggressively some people might be breathing,” he said.

Even with mitigation strategies, Kansas Citians should do everything they can to avoid contact with other people, he said.

“My recommendation is to stay home with your family and do some push-ups and sit-ups in your basement,” he said I think it would be a safer way right now.”

Cases of COVID-19 aren’t just rising in Missouri and Kansas — they have been soaring across the Midwest. When Kansas City’s new COVID-19 restrictions are compared to those in place in other Midwestern areas, Kansas City falls in the middle of the pack.

A recent White House report recommended decreasing indoor dining in Missouri to less than 25% capacity as a mitigation strategy.

St. Louis County has also instructed residents that the only people they should visit outside of their homes are those in their “support bubble,” or members of an outside household who support social and emotional needs. The county said support bubbles should be made up of fewer than 10 people. 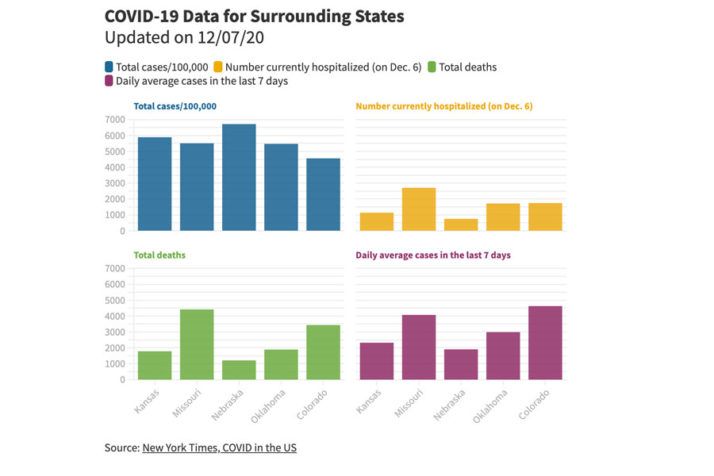 Meanwhile, Denver has the strictest restrictions of nearby cities, which have come from both the city and state level. Denver implemented a 30-day curfew ordinance at the beginning of November, ordering residents to be home by 10 p.m.

However, the order has been replaced with a “Level Red: Severe Risk” order from the state of Colorado, which prohibits public and private gatherings of people who are not members of the same household. The order also bans in-person services at bars and restaurants, and places offering outdoor services must stop serving alcohol by 8 p.m. There also are capacity caps of 10% or less on offices and gyms and a cap of 25% on places of worship and outdoor events.

Missouri Gov. Mike Parson declared and extended executive orders for a state of emergency, but he has stated he does not plan on implementing other orders such as a state-wide mask mandate.

Kansas Gov. Laura Kelly recently released an executive order requiring face coverings in public, or when someone is less than 6 feet away from another person. The order, which went into effect on Nov. 25, gave Kansas counties a week to create their own mask protocol, otherwise the one outlined in the order went into effect. According to the Kansas Department of Emergency Management, 28 counties chose to take no action and now fall under the state’s mask mandate.

Meanwhile, Mayor Lucas has called upon everyone in Kansas City to stay home and help the city get through the pandemic.

“The challenge is that few, if any of us, eat, sleep, shop, play, pray and learn just within our jurisdiction,” said Rex Archer, Kansas City, Missouri director of health, through a spokesperson. “Confusion over different requirements can best be handled by people assuming the highest level of restriction and living by that.”

While the holiday season may be difficult for people who are quarantining, Larsen said the news from vaccine trials in the last few weeks has been promising. Vaccines made by Moderna, Pfizer and AstraZeneca all have been shown to be effective in Phase 3 clinical trials.

“I understand that people are sick and fed up with quarantine and being locked in their homes,” Larsen said. “But if we can hold on a couple more months, that’s a lot of lives we can save.”

Brittany Callan covers health and environment at The Beacon, and is a Report for America corps member. Funding for this reporting was provided in part by the Health Forward Foundation. More by Brittany Callan