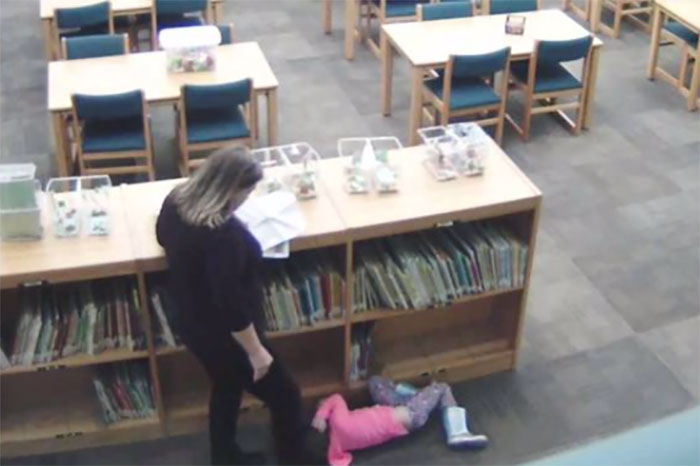 A still image from surveillance video that showed teacher Crystal Smith kicking a kindergarten student in the library at Bluejacket-Flint Elementary in February, 2019.

A former Shawnee Mission teacher will serve one year probation after pleading guilty to one misdemeanor charge of battery for kicking a kindergarten student at Bluejacket-Flint Elementary School in Shawnee last year.

Crystal Smith, 55, pleaded guilty in a hearing conducted by video in Johnson County District Court on Thursday. Smith was initially sentenced to a 30-day stint in jail, but the judge granted Smith one year probation and also ordered her to complete an anger management course.

Smith’s probation is set to end in December, 2021.

In February, 2019, Smith was seen in security camera footage from Bluejacket-Flint’s library kicking one of her kindergarten students as the student huddled near a bookshelf.

In the video, Smith can be seen instructing her other students as they line up to leave the library. The student, who was five years old at the time, refused to join her classmates and crawled into a low library bookshelf.

After the rest of the class had exited the library, Smith walked over to the bookshelf, reached down and pulled the student out from the shelf. The girl continued to lay on the floor. After some time, Smith kicked the student on her back near her shoulder one time.

Court records show that the student’s mother found out about the incident after the student told her after school. The mother later returned and spoke to school administrators, requesting that security camera footage from the incident be reviewed. The mother also confronted Smith, who denied hurting the student, according to court records.

The district put Smith on leave and ultimately fired her two months after the incident.

Proceedings in the civil case had been on hold awaiting a resolution in the criminal case.

The civil suit alleges that Smith’s actions against the student were “intentional, willful and wanton” and “displayed a deliberate and callous indifference” to the student’s well-being.

Dan Zmijewski, a lawyer representing the family in the civil lawsuit, said the girl has since transferred schools but is still traumatized by the incident.

“She’s still struggling,” he told the Post in an interview Monday. “It’s hard for a child to place faith in another teacher after something like this has happened.”

The civil suit also alleges that the Shawnee Mission School District “failed to adequately train employees on the proper handling of events that require de-escalation.”

It also alleges the district was negligent in hiring Smith for the 2018-19 school year, just a few months before the incident in Bluejacket-Flint’s library. The civil suit petition says Smith’s previous principal at a school in North Carolina said “Smith would not have been re-hired” there but that SMSD still hired her.

“The school district needs to be held accountable for hiring her and allowing her to be in the school in the first place,” Zmijewski said. “We want the school to take responsibility so that other kids don’t have to face this same kind of thing.”

A district spokesperson said it would not be appropriate to comment at this time.

The next hearing in the civil case is scheduled in federal court in Kansas City, Ks. for February 8, 2021.