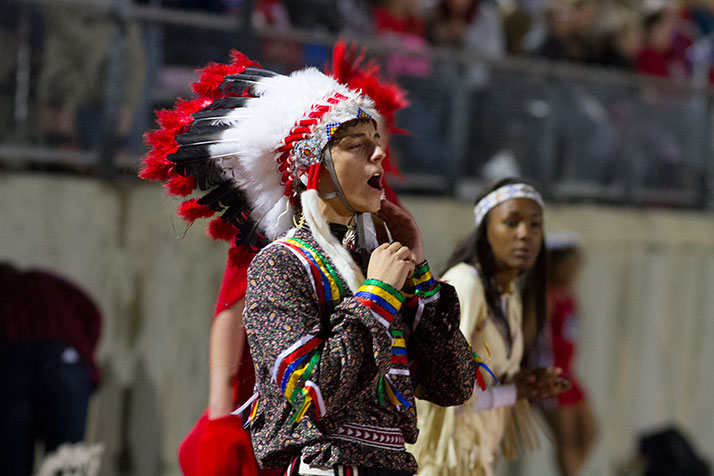 The Shawnee Mission Board of Education is considering a brand new policy on mascots — under which the SM North Indian mascot would be retired. Previously, the district disallowed the wearing of headdresses and other such attire during athletic events sometime after this photo was taken. File photo.

Several Shawnee Mission schools could have new mascots by the end of the school year.

The Shawnee Mission Board of Education is on track to consider a new mascot policy as early as at its Jan. 25 regular meeting, which could lead to several mascots in the district being changed — including the Indians of Shawnee Mission North High School — by the end of the 2020-2021 school year.

The process is advancing after a SM North alumni-led group started a petition this summer pressing the district to change the high school’s Indian mascot, as well as other mascots referencing Native Americans, such as the Belinder Elementary Braves.

“I just want our community to understand that the purpose of this [new policy] is to make changes based on our strategic plan and the public outcry,” SM Northwest area board member Jamie Borgman said during Thursday’s policy committee meeting.

“We don’t want people to feel like we’re doing this work just to do the work.”

Sara Goodburn, SM North area member and policy committee chairperson, said the new policy language regarding mascots would be listed directly after current policy language that prohibits discrimination, harassment and retaliation, listed as policy AC. Goodburn read through the policy draft that outlines the role of mascots and defines the term.

The policy language includes a list of five requirements all school mascots must meet, and a clause addressing how to handle mascots that fail to meet those standards. After some discussion and editing, the committee finalized the following requirements for all district mascots:

How mascot removal would work

And the committee agreed to this language that address what would happen to mascots not in compliance with the new standards:

Under the new policy, if adopted by the full SMSD board of education, Native American mascots would not be in compliance, Goodburn said.

After the policy’s adoption, the board would need to adopt a resolution stating which mascots fail to comply — which would be reviewed by legal counsel, superintendent Mike Fulton said Thursday.

If the policy is adopted and a resolution to retire a particular school’s mascot is passed, Fulton would work with individual principals to identify a transition process that would work for their school’s community. The process is anticipated to differ from school to school, specifically from elementary schools to middle and high schools.

Students, Fulton said, have a role in helping choose a new school mascot, and once a new mascot goes through the community and school administration, SMSD’s superintendent would have the final approval.

Fulton said a new mascot for any school would not be his choice, but the final decision would come back to him “as a safeguard.”

Where the timeline stands

The full board of education is set to have a first reading of the new mascot policy at its Dec. 21 board meeting. The policy committee will reconvene on Jan. 7 to discuss any potential changes to the draft, and it will go before the board for consideration — and to be potentially approved — as early as Jan. 25.

Fulton said changes in schools’ signage, team uniforms and other logistical factors would not happen overnight. Although the full implementation of new mascots might take time, Fulton said the decision on a new mascot could be made within the same semester, suggesting schools like SM North could have new mascots by the end of the 2020-21 school year.

“It’s not unreasonable to think it can be done by the end of the school year, by the following school year,” Fulton said. “There are considerations to make sure the process really has time to vet itself out.”

The public can provide comments on the new policy on Dec. 21, though the board will not formally vote on at that meeting in an effort to hear from varying perspectives.

Borgman said changing the district’s Native American mascots is something that’s been discussed for years, and as a result, it might merit waiving the first reading. Jessica Hembree, Shawnee Mission South area member, said while she’s enthusiastic about the new policy, she thinks it should travel at the same speed as anything else.

“I want to see this pass super bad, I’m glad we’re taking this up, but I keep reminding myself I don’t think it should move any faster or any slower than any other policy based on its content,” Hembree said.