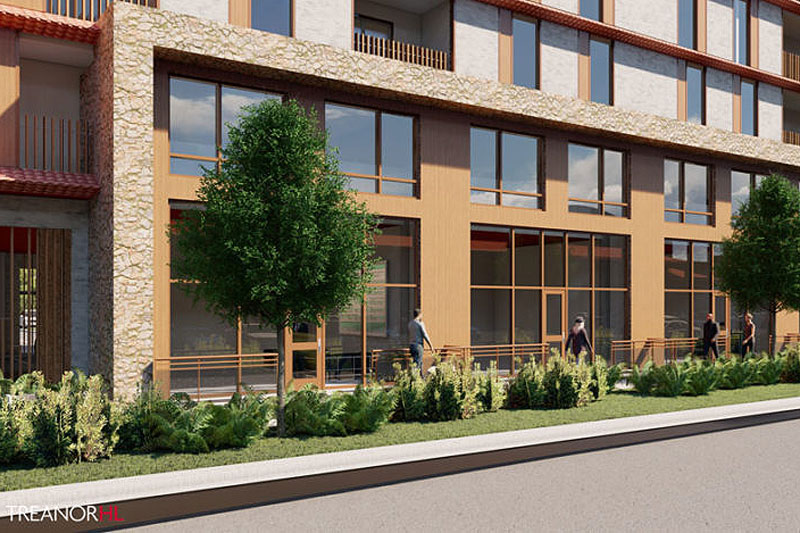 The proposed 161-unit apartment complex proposed for the former Mission Bowl site is projected to be complete by August 2023, if the development process remains on track. Image courtesy of Connor Treanor.

The 161-unit apartment complex planned for the former Mission Bowl site at 5399 Martway Street is projected to be completed by August 2023, city staff said Wednesday during a finance and administration committee meeting. But at least one councilmember advocated for a strict construction timeline.

Councilmember Sollie Flora asked if language locking in the developer to the timeline was as strong as it could be to ensure once construction starts, there’s continued forward progress. Flora said there’s been other redevelopment projects in the city that have had completion issues, seemingly referring to the Mission Gateway site.

City Administrator Laura Smith said, in response to Flora’s comments, that the August, 2023, finish date is a fairly tight time frame. She agreed with Flora’s point that there are benefits to stricter time constraints.

“I understand we’ve had a different experience over multiple years with some of our other projects,” Smith said. “I think there are opportunities, if you meet that schedule, a potential event would trigger an event of default. You would have the opportunity there to terminate, potentially, the agreement in its entirety.”

Mission’s finance and administration committee discussed three items related to the proposed apartment complex, including a draft redevelopment agreement and the ordinance splitting the Rock Creek tax increment financing district. Smith said there are sections of the redevelopment agreement city staff intends to work on — such as the sustainability piece that was left blank.

Smith said a more comprehensive draft will be sent to the city council for review, and can be discussed on Dec. 9 when the city’s committees meet for a second time this month.

Councilmember Trent Boultinghouse asked if progress had been made on an issue he previously brought up related to affordable housing: what happens to low-income tenants who sign up in year 19 of the 20-year affordable housing period. Pete Heaven, the city’s land use attorney, said he will be sure to address Boultinghouse’s concern in the next draft.

The finance committee will reconvene on Dec. 9 to further discuss the Mission Bowl redevelopment agreement. Following the committee meeting, the city council will meet on Dec. 16 for two public hearings related to the proposed project.