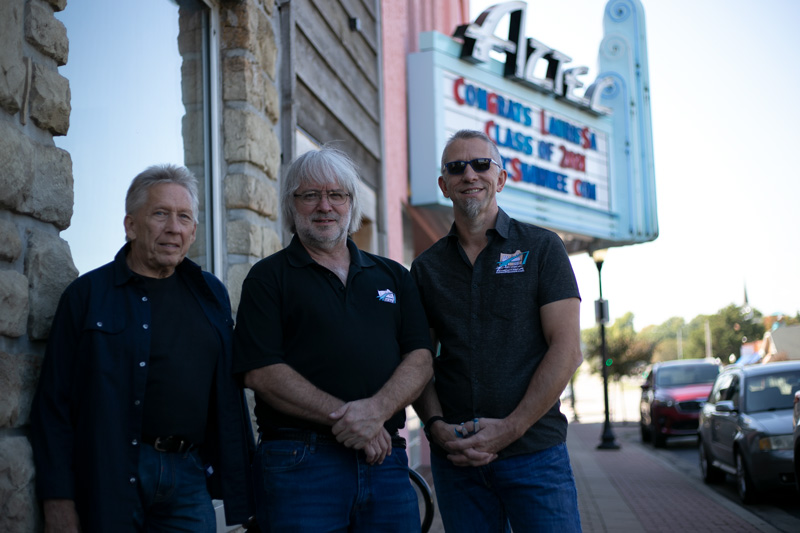 “We are ecstatic about opening. It is really a culmination of a lot of work and a lot of time and a lot of effort," said Jeff Calkins. Above, from left, are Bruce Young, Chris Calkins and Jeff Calkins, business partners and owners of the theater.

After 46 years of lying dormant in downtown Shawnee, Aztec Theater is finally reopening its doors.

Located at 11119 Johnson Drive, the historic theater closed in 1974. Since then, several efforts to restore and renovate it have been in the works. With the help of three Shawnee natives who took over the project — brothers Jeff Calkins and Chris Calkins, and Bruce Young — the theater reopens this month.

“We are ecstatic about opening,” Jeff said. “We had to hold off just because of COVID, and it’s taken so long just in general, wanting to get everything going. It is really a culmination of a lot of work and a lot of time and a lot of effort. We are just incredibly excited to get it open, [even] on a limited basis.”

The Calkins brothers and Young, business partners and co-owners, have been working on plans to reopen the theater since spring 2017. They purchased the building in October 2017.

Aztec Theater needs one last fundraising push to reach the finish line. The owners need about $50,000 to cover costs for a projection system and screen as well as finishing touches.

To help cover those costs, they are hosting a fundraising gala and premiere unveiling of the theater from 5 to 9 p.m. Sunday, Dec. 13.

“People that attend the gala will be the first ones to see it and the first ones to share it,” Jeff said. “That’s the big deal. We haven’t allowed any social media, any outside pictures. So that is the time you get your first look at it.”

Proceeds from the gala, including ticket sales, silent auction and seat sponsorship, go toward those finishing touches. Betty C’s next door is co-hosting the gala with a cash bar.

Some silent auction items include:

Once open, Aztec Theater will feature live music and entertainment on the weekends, including open mic nights, comedy shows, concerts and speaking engagements. After the projection system and screen are purchased, Aztec will also show older films, from the silent era to the ‘90s. Aztec won’t show new releases — it’s too costly.

“There’s a lot of movies out there that people have a tendency to watch on Netflix and Amazon,” Jeff said. “It’s giving them the opportunity to see it in a unique venue. It’s not like we’re going to fill the theater every night and all that. Movies are really for the community. It’s really what the community wanted.”

A couple of original 35 mm projectors — huge boxes with lenses and lights with large platters to run the film and rewind it at the end — came with the purchase of the theater, but they won’t be in use because they take up too much space, among other reasons.

“They’re very antiquated,” Jeff said. “They take a lot of time and a lot of personnel to run. Logistically, it’s a nightmare to run.

“It’s kind of neat to have those things; it’s cool and nostalgic. But the reality is, you can take a good old movie that’s been changed over to digital, and it still has its same kind of feel. Really, to show some of the old movies in the best way we could, we decided to go with a digital one.”

The space will also be available to rent for private events like weddings, parties and meetings. The theater has no plans to offer live theatre, as the venue lacks dressing rooms for performers to get ready.

The owners may announce during the gala their plans for multiple smaller “grand opening” dates instead of one big grand opening that would draw a crowd.

“When we bought this, we anticipated having a grand opening, where you get in as many people as you can, which obviously, we can’t do that right now because of COVID,” Jeff added.

The gala is limited to 175 guests. About 50 or 60 tickets are still left. Individual tickets cost $100 and can be purchased on the theater’s website, once a link is made available. Guests are asked to wear masks, and Aztec will provide masks and hand sanitizing stations.