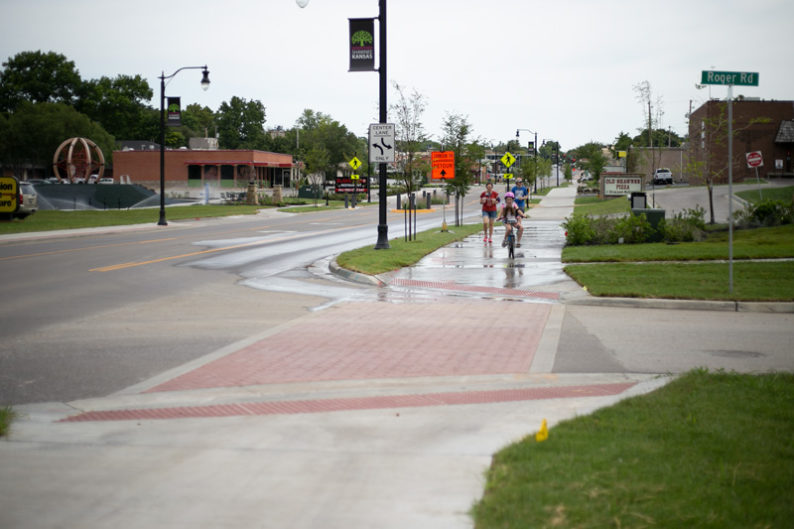 The Nieman Road improvements in downtown Shawnee cost the city about half a million dollars above the original project budget. Above, an image of the completed project from summer 2020.

Editor’s note: This story has been updated to clarify that the city will pay Amino Brothers Company roughly $511,500 more than what was in the original construction contract.

The city of Shawnee will pay Amino Brothers Company roughly $511,500 more than what was in the original construction contract.

Meanwhile, the Nieman Roads improvement project in downtown Shawnee came in about $1 million under the project’s original budget, according to city documents. The project was budgeted for roughly $11.3 million, and final project costs came in at just under $10.4 million.

The Shawnee City Council on Nov. 23 voted 7-0 to accept a cost increase to the construction contract of about $511,500 — bringing the final contract amount for Amino Brothers Company to roughly $6.7 million. The original contract was just under $6.1 million.

City staff reported that the major increases to the final cost are a result of expanding the scope of the project at the 55th Street intersection, along a section of Nieman along Johnson Drive, and on most of the side streets along Nieman. These include:

Nieman Road improvements included a total remake of the aging corridor stretching from 55th Street to Shawnee Mission Parkway. After a series of delays spanning the project timeline over the past five years, crews wrapped up final touches on the project earlier this year.

The primary cause of delay was burying power lines and utilities, which took place a few years ago. The original anticipated start date for construction was in October 2018.

The Nieman Road improvements were a subset of the city’s largest capital improvement project totaling about $38 million. Here’s a link to the city’s Nieman Now! After Action Report.

The city awarded the contract for Nieman Road in September 2018. At the time, the project comprised the following:

City staff noted that, because of significant utility conflicts and ongoing work with other Nieman Now projects, Amino Brothers was unable to begin any work until April 2019. Since then, about 100 “weather days” have affected the company’s ability to work on the project. The contractor was also delayed about 30 days from ongoing utility relocations, and also needed an additional 35 days for the additional scope of work.

The city had also approved another change order in November 2019, increasing the project costs by an additional $127,000.

There was no discussion or public comment. Councilmember Tammy Thomas was absent.